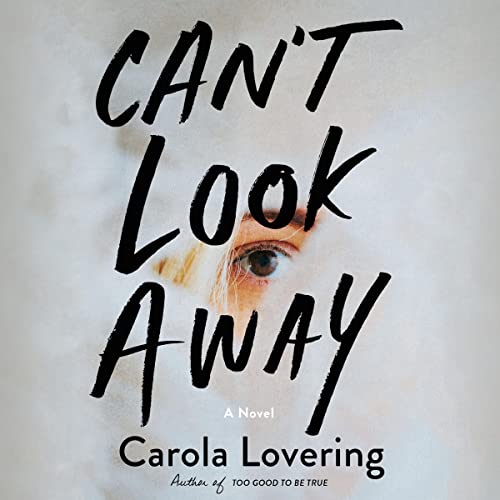 From the author of Tell Me Lies and Too Good to Be True comes Carola Lovering's Can't Look Away, a sexy suspense novel about the kind of addictive, obsessive love that keeps you coming back—no matter how hard you try to look away.

In 2013, 23-year old Molly Diamond is a barista, dreaming of becoming a writer. One night at a concert in East Williamsburg, she locks eyes with the lead singer, Jake Danner, and can’t look away. Molly and Jake fall quickly and deeply in love, especially after he writes a hit song about her that puts his band on the map.

Nearly a decade later, Molly has given up writing and is living in Flynn Cove, Connecticut with her young daughter and her husband Hunter—who is decidedly not Jake Danner. Their life looks picture-perfect, but Molly is lonely; she feels out of place with the other women in their wealthy suburb, and is struggling to conceive their second child. When Sabrina, a newcomer in town, walks into the yoga studio where Molly teaches and confesses her own fertility struggles, Molly believes she's finally found a friend.

But Sabrina has her own reasons for moving to Flynn Cove and befriending Molly. And as Sabrina’s secrets are slowly unspooled, her connection to Molly becomes clearer—as do secrets of Molly's own, which she’s worked hard to keep buried.

Meanwhile, a new version of Jake's hit song is on the radio, forcing Molly to confront her past and ask the ultimate questions: What happens when life turns out nothing like we thought it would, when we were young and dreaming big? Does growing up mean choosing with your head, rather than your heart? And do we ever truly get over our first love?

What listeners say about Can't Look Away

Finally! A book minus the Political BS! ⭐️⭐️⭐️⭐️⭐️

This is my first experience with a Carola Lovering book and I really enjoy this story. It’s easy to follow and tied things up in the end… but, a certain character deserved some jail time!

The narration was good, I won’t point out annoyances bcs I don’t want my bias to taint the listening experience for some. In my opinion the 4 stars was a stretch at times, except for Zachary Webber, he’s as smooth as silk.

And finally, thank you to the author for leaving the political rhetoric out. There was no “racist” this or that, or “all white people are bad, especially men”, no Trump, no Biden, no Obama, no Far-Left or Far-Right ideology, no mention of what a horrible place the USA is! I’m so tired of choosing a FICTION, romance or mystery book and discover the author has filled the story with constant “Social Justice” or LGTBQ bombarding! We get it. I have given up on SO MANY of my favorite authors for this very reason.

I understand an author’s need to be relevant and include current events, but sheesh!, I want to escape into a book for a reprieve from all the nasty, divisive, BS that seems to be engulfing the entire planet these days.

Overall, this was a really good, easy listen. I hope my review helps.

So many twists & turns…soooo good!

I couldn’t stop listening. There were so many directions that this book took, but it worked and I loved it. This is my first book for this author. I think I will be checking out more from her.

We all secretly wish to run into an ex which makes this story so relatable. Fast paced and entertaining. Superb narration. Highly recommended and I’m very picky!

Number one, who has not fantasized about running into their ex after years of no contact!? I could just feel the tension, suspense and love in every word and description,
I have not found many books which contain such a pure and honest love story, while working in the thrill and suspense I crave. The narrators were also fantastic, there were no unnecessary political innuendos and I could just enjoy the entertainment. I wish it wasn’t over!

Such a magnificent book, I highly recommend it! I couldn’t stop reading it. Good from beginning to end!!

Never listen to this author before, but it was very engaging. Narrators we’re very good as always and very good plot line. Ended somewhat predictable but very entertaining!

I loved how I couldn’t stop listening, It kept me on my toes the whole time!!

I really enjoyed this book and the narrators. I only wish there was a book 2 that would continue the story of Molly & Jake.

I loved the authors previous book, Too Good To Be True, and I couldn’t wait to get my hands on this one.
The power of your first true love as an adult can make people do all kinds of things and this is what you will find as the centerpiece of this story.
Love can be so many things to different people, but when a person feels that first love was stolen from them…all bets are off.

Some of the best narrators in the business

I enjoyed this book very much. It is catching and sometimes unpredictable. I definitely recommend.