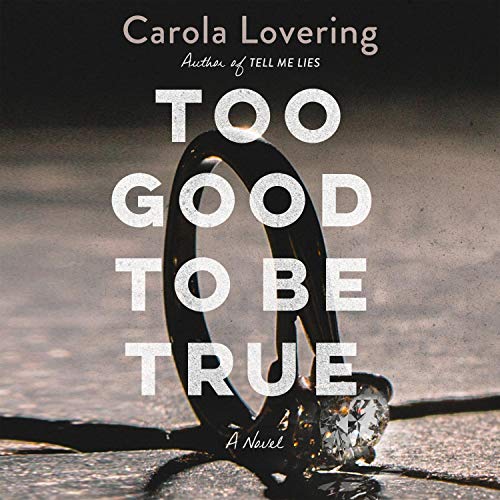 Too Good to Be True

One love story. Two marriages. Three versions of the truth.

Too Good to Be True is an obsessive, addictive love story for fans of Lisa Jewell and The Wife Upstairs, from Carola Lovering, the beloved author of Tell Me Lies.

Skye Starling is overjoyed when her boyfriend, Burke Michaels, proposes after a whirlwind courtship. Though Skye seems to have the world at her fingertips - she’s smart, beautiful, and from a well-off family - she’s also battled crippling OCD ever since her mother’s death when she was 11, and her romantic relationships have suffered as a result.

But now Burke - handsome, older, and more emotionally mature than any man she’s met before - says he wants her. Forever. Except, Burke isn’t who he claims to be. And interspersed letters to his therapist reveal the truth: he’s happily married, and using Skye for his own, deceptive ends.

In a third perspective, set thirty years earlier, a scrappy 17-year-old named Heather is determined to end things with Burke, a local bad boy, and make a better life for herself in New York City. But can her adolescent love stay firmly in her past - or will he find his way into her future?

On a collision course she doesn’t see coming, Skye throws herself into wedding planning, as Burke’s scheme grows ever more twisted. But of course, even the best laid plans can go astray. And just when you think you know where this story is going, you’ll discover that there’s more than one way to spin the truth.

“Lovering, a master of manipulation to rival her own characters, does a skillful job of gradually unspooling her intricate tapestry of psychological intrigue while deftly juggling her multiple narratives.” (Kirkus)

What listeners say about Too Good to Be True

A great book and the narrators are perfect. I had a lot of OMG moments. Easy to listen to... played a movie in my head.

Definitely a theme throughout this story

The story is very interesting. As someone who grew up middle class in Fairfield County, I can relate to the writer's disdain for anyone trying to define their success in life through how much money one has and not by their morals. I found a lot of moments very cringe-worthy and was worried about how it would play out in the end, but it seemed to be pretty realistic overall. I would have given it a 3.5 if I could have and rounded up vs down because the ending was better than expected.

Loved this audiobook. All the narrators were great, but Stephen Dexter did the best job showing the two sides of Burke Michaels. The way he delivered sarcastic wit had me laughing out loud. There were other parts that had me so angry, and I might have yelled out an expletive or two. All that to say, all narrators did a great job with their characters and engaging you in the story.

The story was fast paced, well thought out/clever and kept you guessing. The twist is delivered in a subtle way, and I didn’t pick up on it until it was revealed.

This makes for a great beach or pool read/listen - click to download ... You’ll be glad you did.

I couldn’t make it through parts because the language was so bad. F*** every sentence. Awful. I do not recommend this book.

Okay, yes there was a big surprise. But after it's revealed there's not a whole lot of story left to tell. Way, way, way too long and drawn out and the story isn't much for believability. I love Amy McFadden's narration as always.

The book held my attention but it needed a satisfying twist in the end. This book would have been great otherwise. Heather the money grubbing sociopath was so infuriating.

It was a good story but it just seemed to fall flat at the end. The narration was good although the man's breathy voice was sometimes irritating. It was fast paced but it really needed a twist in the end.

This story has “IT” all. The moral of the story is super inspiring! Letting go is so hard to do.

Loved loved loved. Great characters and a gone girl worthy twisty plot. Going to get a copy for my best friend and mother in law. LOVE this author and can’t wait to see what she does next!

The ending made me cringe

Such fantastic, suspenseful build-up for such an anti-climactic ending. The characters are decent though and the actress who narrates Heather was amazing. I could listen to her tell stories all day! Just not this one 😅