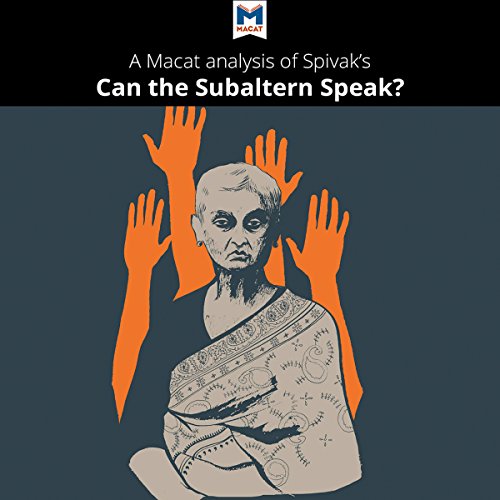 A Macat Analysis of Gayatri Chakravorty Spivak's Can the Subaltern Speak?

Can the Subaltern Speak? is a classic of postcolonial studies, the discipline that examines the impact of colonial control on countries that gained their independence from European powers from the 1940s onwards. The essay, written in 1988 by Calcutta-born scholar Gayatri Chakravorty Spivak, argues that a core problem for the poorest and most marginalized in society (the subalterns) is that they have no platform to express their concerns, and no voice to affect policy debates or demand a fairer share of society's goods. The women among them, says Spivak, are doubly oppressed.

Spivak first earned her academic reputation thanks to her English translation of French philosopher Jacques Derrida's Of Grammatology. This work, as well as feminism and Marxism, strongly influenced Can the Subaltern Speak? The essay has been widely praised for the insights it brings to postcolonial studies, but has also been criticized as dense and difficult to understand.

What listeners say about A Macat Analysis of Gayatri Chakravorty Spivak's Can the Subaltern Speak?

Plain spoken introduction to Spivak’s essay. Really helpful breakdown of the main arguments and structure of the essay. Usefully explains the some criticism of Spivak’s written style

Not a conscientious treatment of the subject

The writer of this analysis lets their bias (both implicit and explicit) affect the recounting of the subject matter. It is problematic to be told that New York is a State in "America" but it is more difficult to accept the notion that while it is fine to deliver a "postcolonial" or "feminist" critique that Spivak has made towards "Capitalism" is regretful; is this because Audible is Amazon? I could not continue to listen to this with its bias so prevalent.

Worth listening for Scholars

It really helped me to understand the essay clearly. I appreciate and recommend for scholars.

This reads like a B grade undergraduate paper on Spivak-- which may be exactly what you are looking for!

This audiobook helped me understand "Can the subaltern Speak" in ways unparalleled to my class. i have a new and deepened appreciation of the work. Thank you.

Repetitive and misses the essence

What would have made A Macat Analysis of Gayatri Chakravorty Spivak's Can the Subaltern Speak? better?

The analysis never gets to the core of her argument. I was looking for help with the dense theory and instead it was an academic history of the essay. I would have focused on the theory and make a better effort in un-packing it for the listener. For example it never really explain why the subaltern cannot speak. I just says that it cannot.

I was thinking of the Homi Bahbah analysis but now I'm not sure.

The reader performed well but there is a lot of unnecessary introductions to every chapter.

I'm glad someone is trying to do these topics on audiobooks.