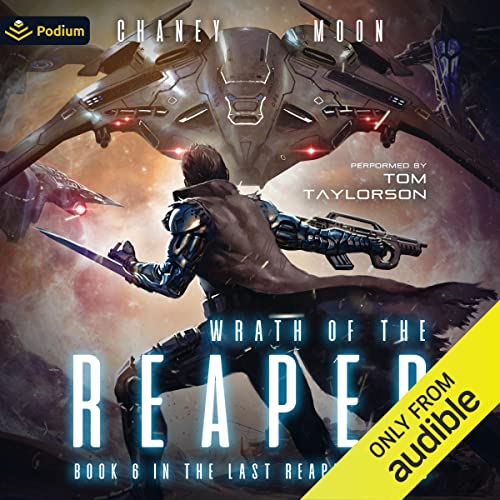 Wrath of the Reaper

It’s all on the line now.

When Halek Cain and his allies search for a new home, the exodus fleet faces their ancient enemies right when a captured scientist unleashes deadly experiments. Alon scout ships are drawing the exodus fleet into a trap. Two disparate civilizations must work together to move a massive, broken-down fleet into a new system while dealing with external threats and an internal crisis. Doctor Ayers has attempted to revive an alien race through DNA splicing, but instead of resurrecting the past, he’s created unstoppable creatures of extraordinary power.

The last Reaper and his allies have no choice but to fight against this new enemy, protect the exodus fleet, and find a new home for thousands of displaced survivors. The only thing that matters now is winning the right to stay alive.

What listeners say about Wrath of the Reaper

Story is, very clearly, abridged. Important story points are completely skipped over, and further references make it even worse.

should be called wrath of the readers

this book seems like it was forced to be shorter. just a long plot reveal then bang to be continued.. no wrath whatsoever from the reaper

Why all of the complaining?

This is a great story and great voice acting.
I think people need to relax when it comes to the change. It doesn't take away from the story in any way.

The Reaper never let's you down,
engaging characters, space battles, and plenty of space drama. I love this series & can't stop back to back listening.

Storyline is consistently good along with outstanding narration. I am looking forward to next books.

JN Chaney and Scott Moon give the characters Soul, Tom Taylorson brings them to life

These books should be a little longer...

This book was good as I love the series, but this one was a little too short. Just when it was getting really good, you could see the setup for the next book. I would rather have a 10 to 12 hour book than to have to wait for the release of the next. Although, that's what I will anxiously do. (sigh).

Love this series!!! It’s exciting, has wonderful heart string moments and enough sarcastic chuckles! Looking forward to next one.
Oh and lest I forget Tom Taylorson is excellent! Enjoy!