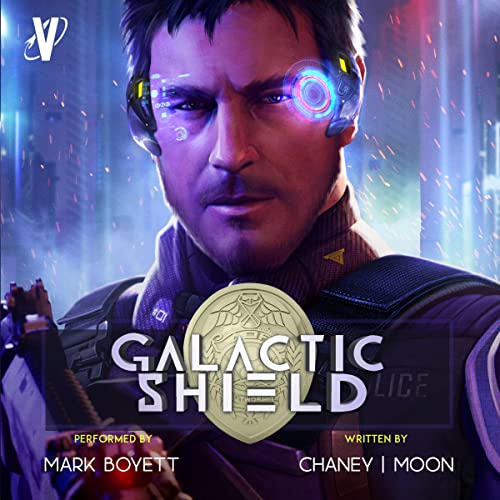 Benjamin Wrath is among the first officers to get sent to the Andromeda Galaxy.

As part of the Sentient Crime Division, millions of light years from Earth, Wrath's precinct is in charge of maintaining order in a chaotic new frontier, tasked with protecting the rights of all sentient beings.

But that's only the beginning.

While investigating a triple homicide, he'll also have to prevent more killings, stand against internal corruption, and stop a war that threatens to unravel an empire.

With clashing alien cultures and tension on both sides, his task isn't easy, especially out here where the only person you can rely on is yourself...and backup isn't coming.

Experience this exciting new series from USA Today best-selling authors J.N. Chaney and Scott Moon. If you're a fan of explorative, gritty sci-fi, this is the series for you.

What listeners say about Galactic Shield

Something a little different

I've read a number of books by these two authors and this one is another that doesn't disappoint. Also good to see something that is from a cops prospective. Worth searching out the prequel that's available "Breaker's Last Stand" listed on the Variant Audio website. It gives a little bit more fat to the main characters background.

As usual Mark Boyett does a solid narration. Very clear and easy to follow.

I'm a longtime fan of Chaney's, so I knew to expect a high level of quality here, but still this book caught me by surprise. I quite enjoyed it and wanted to see more when it was done. The characters feel very real, the narration is smooth and exciting, and the worldbuilding is extremely good. Overall, a great book that I am really glad I snagged. I'll definitely check out the next.

A great story with awesome characters, narrated by one of the best. Galactic Shield tells an interesting story about Humanity's early days in the Andromeda Galaxy and the first intergalactic police precinct. Their mission is to keep the peace and help both Humans and aliens alike survive and thrive in what is essentially the Wild West of space. The lead character "Breaker" is a tough and experienced cop just trying to help people. Personally, I love seeing characters like this and I find them inspiring. Breaker is perfectly played by Mark Boyett, who brings his tested vocals to the book and provides a great rendition. I hope more books follow (seems to be the plan) very soon as I am already very eager for more.

Super fun book about space cops and I am here for it! Can't wait for more!

Another great book from Chaney and Moon

As expected, this one rocked. I can't say enough good things about these writers and this book, but that's par for the course with anyone Chaney writes with. He cowrites a lot and it is always high quality. This was no exception. Loved the story and the creativity on display here. Boyett brings his A-game to the book and I am absolutely loving it.

can't wait for the next book

loved it. can't wait to find out what happens next. Characters have secrets not revealed yet.

awesome ride from start to finish

Definitely not my first book from this team, but it might be my favorite. Breaker is a great character with a cool cast of side characters. If you like the idea of good cops saving people and uncovering corruption, this is a great story, but it is made all the better by the scifi setting and exploration factor. I'm a huge fan of discovering strange new worlds and this scratches that itch.

Good story with plenty of mysteries!

This book was an excellent blend of sci-fi police/soldier and mystery. Definitely felt like something I’ve never read before. Interesting characters and well done on the narration. I must admit I would love to learn more about the backstory of the characters. There are references to previous wars and I want to know more! i highly recommend it and another great JN Chaney entry.

Really enjoyed. Was a little confusing initially in audiobook form. Got better as things became clearer.

another great offering! reminds me a bit of Galactic Law.well kinda.narrator is excellent also.

This was a pretty good book. The story line was good and the characters were easy to to like, especially Kyn and the voice he was given. It was nice that everyone had fun with each other but when it was time for "business" everyone went at it with a vengeance.

This was about a triple murder that Wrath and his crew had to solve, and Wrath found two of his ex-team members in trouble; one was a dirty cop and the other was addicted to drugs.
There was plenty of death and destruction in this book.

Not a whisper of romance and no swearing to speak of, so this book was definitely aimed at YA readers, which I'm not, so I'm on the border as to whether or not I'll read the next in this series.

As to the narration: Mark Boyett did a fabulous job on everyone's voice.