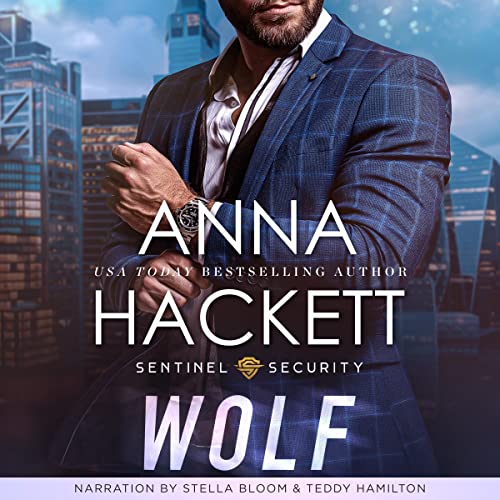 By: Anna Hackett
Narrated by: Stella Bloom,Teddy Hamilton
Try for £0.00

The man she’s had a crush on her entire life and now the man pretending to be her lover to keep her safe.

CEO Lainie Madden has her hands full. In charge of a growing tech company, her work and her employees are her life. She’s sworn off love, because the sad reality is that she stinks at choosing men who aren’t self-absorbed cheaters. But when she starts receiving disturbing death threats and her company’s website gets hit with relentless cyber-attacks, she’s in over her head.

What she never expected was her best friend’s bossy, rugged brother to steamroll in to play her fake boyfriend and very real protector.

Former SEAL and CIA agent Nick “Wolf” Garrick is second in command at Sentinel Security. He’s spent most of his life fighting and protecting others, proving he’s nothing like the ex-con who fathered him. He’s also spent years ignoring his scorching attraction to his little sister’s best friend. Lainie is sweet, fresh, smart…and off limits.

But when he finds out she’s in danger, it flips a switch inside him. Whatever the risk, whatever it takes, even pretending that they’re lovers, he’ll protect Lainie and take down the person hunting her.

The more time Lainie and Nick spend together, the more the lines blur. As danger swirls around them, their pretend relationship starts to feel very real. But Nick doesn’t do relationships and Lainie doesn’t want to get hurt again….

What listeners say about Wolf

I love the start of this new series. We met Wolf in the last Sentinel book so we knew he was a total Alpha. This book had it all. Drama, suspense and intrigue. Plus a whole lotta love too. Great narration too

3.5 stars
A quick story light on suspense and heavy on the physical attraction. Story and characters are predictable, but enjoyable.

A great beginning to a series with some crossovers to the previous series. Great chemistry between Nick and Lainie. Great suspense storyline. I listened to this in one sitting. Recommend.

The performance was good but I personally don't think Stella Bloom was a good choice to voice Lainie (she sounded too rom-com for me) but others seem to like her soooo.

This book is action packed. I couldn’t put it down. These characters are well written and likeable. With a fantastic performance from both Stella and Teddy.

Awesome narration for a fun story

I admit that I was sad to be leaving the Norcross series but Anna Hackett made it better with this series. The first book of the Sentinel Security sets up the team of awesome characters and I can't wait for more! In this book, Wolf/Nick has to protect his sister's best friend, Lainie from a stalker who is threatening her. It's a race against time to find out who this person is and I liked the twist at the end. Nick has some baggage from his past and it was really wonderful how Lainie brought him out of his shell. As always, this author's stories are really well rounded- a lot of action, a lot of romance, throw in the steam, and now, a fantastic narration team of Stella Bloom and Teddy Hamilton and I absolutely loved the time I spent in Anna Hackett's world.

I listened (and loved) Hades first and couldn’t wait to buy this story. I have over 600 audiobooks in my library with possessive, protective. alpha males and badass women (usually ex-military, special forces, CIA, Interpol) now working in an elite Security (and more) position finding love as my favorite trope.

This series checks all the boxes with tons of action, suspense, twists, and sexy times. This plot is a friends to lovers without angst, just lots of feels.

Again, the narrators knock it out of the park. Now I just have to wait for the next in the series to be released!

Omg! This series is going to be just as good as the others. I’m in love with that Latin lover😂😂😂. Anyway Nick and his little kitten were so hot together. I never would have guessed the bad guy that was genius. Loved the story and the narration.

I love the Norcross and Sentinel books but they are starting to sound the same...protector and innocent woman.
Anna Hackett is an auto buy for me. The Hell Squad and Team 52 were awesome.
Can't wait for a new story line

Good and easy to listen!

Great story with great narration!
I love books with military/security background and this one delivered a fast and steamy one!

Nick was possessive and so protective of Lenny that he left me swooning over him!

The mystery around her threats was also a good one... it wasn't who was the most obvious suspect and I liked that.

can't wait to listen to the others!

I liked the story. Nick and Lainie has history that you can feel in their chemistry.
I really enjoyed the supporting characters and would love to hear their stories as well.
Some of the story was predictable, and some of it caught me by surprise.
All in all, it is an enjoyable listen.

Good start to the series

Enjoyed this story that starts off the Sentinel Security series…with a bit of crossover from Norcross. This one is operative Wolf’s story. He just needs to pretend to be the boyfriend of his sister’s best friend to protect her from whomever has been sending death threats. The inevitable happens when there’s chemistry between a couple. We may even have an HEA if Wolf and the team can keep Launie safe.

this book was ok, I guess from reading all the adventures in the other series, I expected more

This is the first book in the Sentinel Security Series, a Military Romance. This series is amazingly interconnected with other Anna Hackett's security series (Norcross Serity Series and Team 52 Series). Nick “Wolf” and Lainie's story is suspenseful, and fast-paced, filled with mystery, danger, and twists and turns. Nick, a former SEAL and CIA agent, and second in command at Sentinel Security, is very handsome, alpha, and protective. Lainie, a CEO of a tech company, is beautiful, smart, and independent. Nick is her best friend’s older brother. They are perfect together. This is a great best friend’s older brother romance. The supporting characters are interesting, and intriguing. I loved to see again the characters from the interconnected series. Stella Bloom and Teddy Hamilton did an excellent job with the narration. I enjoyed it. I need more! Looking forward to listening to Hades, the next book in the series.