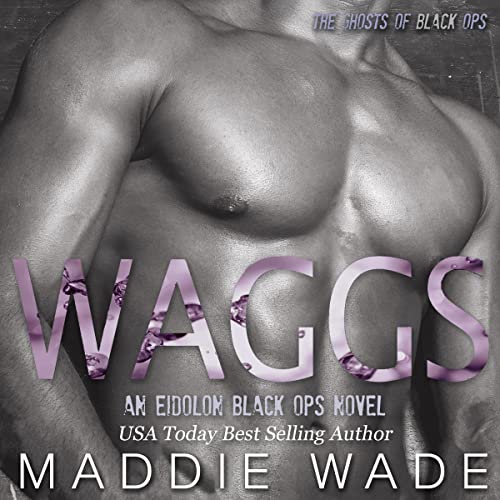 By: Maddie Wade
Narrated by: Christopher Anthony
Try for £0.00

Aiden Wagner is shattered when his identical twin is blown to pieces in front of his eyes, and he can’t do anything to help except hold him as he takes his last breath. In his guilt and grief, he turned to the one person he’d loved from afar, and the one person he never should have touched—his brother’s fiancée. Their wild night together left him full of shame and bitterness, so he ran to the other side of the world and signed on with Eidolon, a Black Ops team who works for the Crown.

Willow knew she was a walking cliché—she’d fallen in love with two men who were so different and yet so alike it was impossible to choose, but in the end, she had. She’d chosen Aaron, and she’d loved him more than anything, except perhaps his twin brother. She’d kept her distance from Aiden, stayed loyal to her fiancé, and never acted on her feelings until the night they’d buried Aaron. Then she made the biggest mistake of her life and turned to Aiden for comfort. Leading to a secret she would carry to the grave to protect.

Willow’s life is once again thrown into turmoil when she uncovers accounting errors at the haulage company where she works. People are dying around her, and soon, she and her loved ones become targets. Willow knows Aiden is the only one who can help her and protect the son she’d gladly die for. Going to him is a risk to her heart, but it’s one she’s willing to take to keep her son alive.

Even though Waggs has built a new life for himself, Willow is never far from his mind, especially as every year on the anniversary of his brother’s death he seems determined to repeat the mistakes of the past. Now Willow is in trouble and she’s reached out to him for help. A killer is stalking her, and Waggs must put his feelings aside to save the woman he loves more every day before she’s murdered, and he’s left with nothing once again.

What listeners say about Waggs

This book has everything. A wounded Alpha, a confused leading lady and so much action you will need to keep up! I loved these characters (I’m saying that with every book in this series!!!). They have great chemistry and a big secret. A brilliant performance from Christopher.

Waggs was an enjoyable listen. I felt for both Waggs and Willow. Admittedly, I was never quite clear on the sequence of events that led Willow to her uncertainty. I understand that she and Aaron were only engaged, but where did the doubt enter the picture if she was so in love?

This was a pretty good story about deceit, betrayal, trust, loyalty, and friendship. I liked the way Waggs stepped up to take care of AJ. I always enjoy the way the Eidolon team and the women of Zenobi step up to have each other's backs.

TBH, this would have been a 5 star read for me were it not for two things. The narrator was ok, but didn't do much for me. The second thing is that I am really tired of human trafficking stories. It seems like I am coming across more books where women and children are victims of trafficking and SA.

I would still recommend this book. There is nothing graphic in it about the trafficking, but if some readers finds that specific subject matter to be triggering, they might want to take a pass.

Aiden and Willow have danced in circles ever since Aaron’s funeral. Aiden would have never put himself before his brother while alive but finally took a chance several years after Aaron’s funeral. This chance only happened that we know of because Willow has gotten herself into some trouble. When Willow came to Waggs for his and his teams help they uncovered buried love for each other. The crimes that they uncovered while digging to keep Willow safe for good was startling and your jaw will drop in your lap. Willow son little AJ is also so cute in this book, I think this is my favorite in the series so far. It had mystery, some sadness, action and of coarse love all in one story. Maddie Wade nailed this book. Christoper did an awesome job narrating so many characters in the book and nailed each voice. Loved it all!!!

There is something about this story that grabbed my attention from the very start. Maybe it's that Aiden is a twin. Maybe it's his loving from afar for so long. Maybe it's the way he is with AJ or his protectiveness. It could be Willow and her determination to be strong and do whatever she has to keeping AJ safe. Whatever the case may be, this book tells a story of true love, family and the bond of twins that can never be broken. It's about the friendship the members of Eidolon have and how they keep each other's backs. It's the building suspense and danger that Willow and Bebe find themselves in. And it's the fact that I feel like I know every one of these characters and they to are my friends. Maddie Wade has an amazing series on her hands, and each installment has me more invested with this Black Ops group. It's a fantastic listen.

Christopher Anthony brings it all to life with his narration. I enjoy his variety of voices, both male and female. He builds the thrills and adds to the passion. I loved his performance.

So many great tropes: brother's (twin) ex-fiance, secret baby. And OMG such a cute kid in this story.
Fast-paced, great story, and excellent chemistry between Aiden and Willow.

Fabulous narrator and narration!!!! Christopher Anthony has a great reading, male, and female voice. I loved this audio.

A few chapter mistakes in the audio- 2 missing and 2 switched :(

I liked the fast paced storyline. It got to the heart of the plot quickly without extra filler. Some drama but resolutions to past mistakes and hurts were great. I enjoyed the comraderie and closeness of this group. Can't wait for more. I voluntarily listened to a free copy and am giving an honest review. The narrator did a great job bringing the characters and story to life.