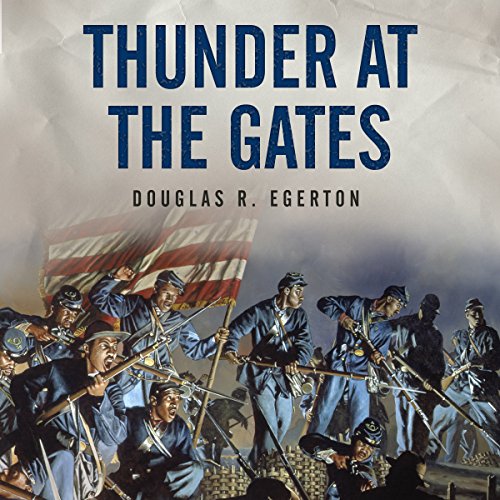 Thunder at the Gates

By: Douglas R. Egerton
Narrated by: Sean Crisden
Try for £0.00

Soon after Abraham Lincoln issued the Emancipation Proclamation on January 1, 1863, abolitionists began to call for the creation of black regiments. At first, the South and most of the North responded with outrage; southerners promised to execute any black soldiers captured in battle, while many northerners claimed that blacks lacked the necessary courage. Meanwhile, Massachusetts, long the center of abolitionist fervor, launched one of the greatest experiments in American history.

In Thunder at the Gates, Douglas R. Egerton chronicles the formation and battlefield triumphs of the 54th and 55th Massachusetts Infantry and the 5th Massachusetts Cavalry - regiments led by whites, but composed of black men born free or into slavery. He argues that the most important battles of all were won on the field of public opinion, for in fighting with distinction, the regiments realized the long-derided idea of full and equal citizenship for blacks.

A stirring evocation of this transformative episode, Thunder at the Gates offers a riveting new perspective on the Civil War and its legacy.

"A thoroughly researched, comprehensive look at the Civil War regiments who took the first step in the struggle to make their countrymen see them as intelligent, capable men." ( Kirkus)

What listeners say about Thunder at the Gates

Excellent book about the 54th, 55th Mass Infantry and 5th Mass Cavalry, including the challenges faced by African American troops in a country that largely did not (and still didn’t for quite some time after) grant them equal rights. A good tonic for Southern Lost Cause mythologies and revisionism, especially considering the words and deeds of Confederates regarding African American troops during the Civil War, which continues to this day. A comprehensive, well-researched historical account, must read for military history buffs.