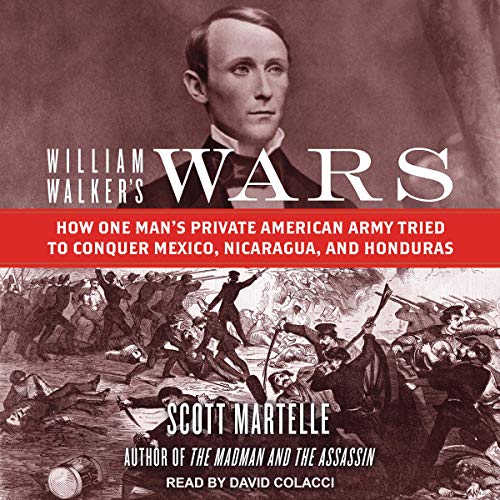 By: Scott Martelle
Narrated by: David Colacci
Try for £0.00

In the decade before the onset of the Civil War, groups of Americans engaged in a series of longshot - and illegal - forays into Mexico, Cuba, and other Central American countries in hopes of taking them over. These efforts became known as filibustering, and their goal was to seize territory to create new independent fiefdoms, which would ultimately be annexed by the still-growing United States. Most failed miserably.

William Walker was the outlier. Short, slender, and soft-spoken with no military background - he trained as a doctor before becoming a lawyer and then a newspaper editor - Walker was an unlikely leader of rough-hewn men and adventurers. But in 1856 he managed to install himself as president of Nicaragua. Neighboring governments saw Walker as a risk to the region and worked together to drive him out - efforts aided, incongruously, by the United States' original tycoon, Cornelius Vanderbilt.

William Walker's Wars is a story of greedy dreams and ambitions, the fate of nations and personal fortunes, and the dark side of Manifest Destiny, for among Walker's many goals was to build his own empire based on slavery. This little-remembered story from US history is a cautionary tale for all who dream of empire.

"Scott Martelle's page-turning account draws on thorough research to tell the story of William Walker as it has never been told before." (T.J. Stiles, author of The First Tycoon)

The book is well written and researched. Much of the book deals with Walker’s various wars and escapades in Central America and Mexico. I had come across Walker in other books I have read such as the biography of Cornelius Vanderbilt. Vanderbilt’s shipping company had continuous problems with Walker. The book read more like a novel than a non-fiction. Martelle’s writing style made history most exciting. If you would like to learn a bit of Central American history, this book would be an interesting read.

The book is twelve hours and seven minutes. David Colacci does a great job reading the book. Colacci is an award-winning audiobook narrator and one of my favorite narrators.

I had a difficult time finishing this book, to be quite honest. William Walker despite being an adventurer par excellence, was a rather boring person and the writer does very little to bring his somewhat reserved and self-contained personality to life.

In general the book does not bring Walker or the cast of characters surrounding him to life, even the extraordinarily flamboyant Parker H. French comes off rather flat and grey.

The book also might be improved if one read it with the accompanying maps from the book within convinient reach.

Not sure what I thought this book was!

Having traveled to Honduras for more than 20 yrs and maintaining good friendships there, i am drawn to books detailing some of their history. I am not sure what I thought this book was going to be. The story itself was interesting as a topic but the story seemed to get lost in the details. Very disappointing.

I knew about William Walker but not like this. Loved this book. I now better understand my country's history.