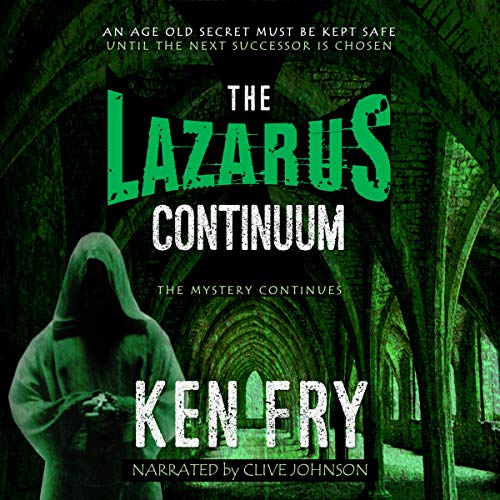 The Lazarus Continuum: The Mystery Continues...

An age-old secret must be kept safe....

Until a successor is chosen.

From the author of the UK religious mystery best seller, The Lazarus Succession, comes a sequel that continues the mystery of the Lazarus painting.

Martha, Ulla's daughter, the daughter Brodie has never seen or met, is experiencing the same visions. An unknown hand seems determined that father and daughter should meet.

Amidst a series of baffling revelations, the action moves across the USA, UK, Spain, Israel, and Cyprus.

A pastor and an incredibly wealthy Las Vegas casino owner knows the secret and are hell-bent on stealing the miraculous painting for wealth and power.

Unless Brodie, his daughter, Martha, and their close friends succeed in keeping the Lazarus legacy alive and the succession unbroken, a powerful secret will fall on evil hands.

Other audiobooks by Ken Fry:

The Chronicles of Aveline: Awakening

What listeners say about The Lazarus Continuum: The Mystery Continues...

Continuing another Chapter you need to read!

As we open it is 17 years later and a new war is about to begin for the Lazarus painting that is rumored to heal people. I didn't enjoy this one quite as much and I think it may have been the narrator. I think he is Australian and its very difficult to make that accent into old English . I enjoyed this story and I'm glad that I listened to the rest of the story.
I received a free code from Audiobooks Unleashed to listen to this book on Audible. this review is my own honest opinion.

A story that spans eight centuries, of religion. The paintings of the rising of Laarus, that have been lost. Said to be icons, or to hold miraculous power
Spell binding account of that time. This is the sequels and well done, intriguing as all the author’s stories are. Given audio for my voluntary review