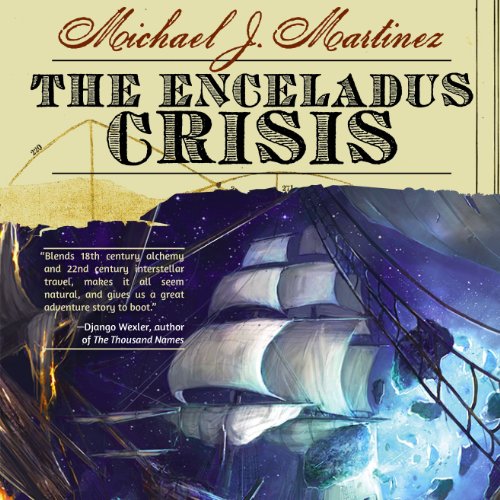 Two dimensions collided on the rust-red deserts of Marsand are destined to become entangled once more in this sequel to the critically acclaimed The Daedalus Incident.

Lieutenant Commander Shaila Jain has been given the assignment of her dreams: The first manned mission to Saturn. But there’s competition and complications when she arrives aboard the survey ship Armstrong. The Chinese are vying for control of the critical moon Titan, and the moon Enceladus may harbor secrets deep under its icy crust. And back on Earth, Project DAEDALUS now seeks to defend against other dimensional incursions. But there are other players interested in opening the door between worlds…and they’re getting impatient.

For Thomas Weatherby, it’s been nineteen years since he was second lieutenant aboard HMS Daedalus. Now captain of the seventy-four-gun Fortitude, Weatherby helps destroy the French fleet at the Nile and must chase an escaped French ship from Egypt to Saturn, home of the enigmatic and increasingly unstable aliens who call themselves the Xan. Meanwhile, in Egypt, alchemist Andrew Finch has ingratiated himself with Napoleon’s forces…and finds the true, horrible reason why the French invaded Egypt in the first place.

What listeners say about The Enceladus Crisis

A fast paced adventure full of daring do, science, magic and a lot in between.

Sequel to The Daedalus Incident. Think Master and Commander in Space meets 2001 A Space Odyssey.

Well read with only slightly dodgy attempts at. British accents by the American readers. Not so bad as to be off putting though.

Make sure you read The Daedalus Incident first or this will make no sense.

The rare sequel that outperforms its predecessor

I assume anyone looking at this has read the first novel in the trilogy, "the Daedalus incident". (If you haven't, go pick it up now. It's absolutely charming.)

However, while the first novel was uniquely charming, the sequel is absolutely astounding. The biggest improvement is in the characters, who in the first novel tended towards archetypes but here finally cement into real people we care for. In particular I tip my hat to the resolution of the particularly obnoxious teenage crush Weatherby and Ann Baker had in the first novel.

The book is, again, not without faults. You quickly find yourself keeping up with four inter-woven plots rather than one whole, and I never felt these distinct stories fully meshed in a satisfactory way. However, each story is fascinating in its own right, so it is very hard to mind. My compliments to Mr. Martinez. Looking forward to the final book coming out soon.

Michael Martinez's Story That Sails Into Our Heart

If you happen to follow this blog, you know that I gushed over Michael J. Martinez's The Daedalus Incident. Yes, I confess to being a bit rabid in my love for the book and becoming a raving fanboy of Mr. Martinez’ writing. Now, I was waiting, to borrow a phrase from the Bard, "...with bated breath, and whispring humblenesse" for its sequel, The Enceladus Crisis. Truth be told, however, I was also waiting with a little trepidation. After all, Mr. Martinez set a high bar for himself in his debut novel; could his sophomore effort live up to the expectations it established? It has and then some. His characters and their relationships are even more fully flushed out, his dialog , description of action (I love the first battle scene) and overall handling of the narrative is, if anything, tighter and better.

Before I go on, if you've missed The Daedalus Incident, stop. Do not collect $200. Do not pass go. Head (physically or virtually) directly to your favorite bookstore and get it. I personally recommend the Kindle/Audible combination which I previously reviewed (the narration rocks, see the review for more details). Mr. Martinez actually gives you enough in The Enceladus Crisis to allow you to read it without reading Daedulus, but why? Seriously, go get it or download it now. It's great.

As is my habit, I read this on my Kindle (Paperwhite) and listened to it via the Audible app on my Windows Phone (Nokia Lumia 920). Once again, the narrators, Kristin Kalbli (22nd Cent) and Bernard Clark (18th Cent), do a superb job with all of the different accents of all of the characters. They jump seemlessly between characters and bring a believability to the dialog. If you like audiobooks, I highly commend this one to you.

This series gets better and better

First, the narrators. I loved the narrators of this story, having a male and female narrator brings the two universes to life.
In addition, the story is fascinating and one which I can easily share even with the little ones. Im telling everyone about these books, how great they are.

I Liked This Book

What did you love best about The Enceladus Crisis?

Weatherby. He was the main focal point for his timeline.

What does Bernard Setaro Clark and Kristin Kalbli bring to the story that you wouldn’t experience if you just read the book?

Having the two narrators brought a new level to the story.

I was very much looking forward to reading The Enceladaus Crisis. Going back to the story of Weatherby and company.
For the most part, I wasn't disappointed.
This time around, Martinez decided to have two point of view characters in each timeline.
This slowed things down a bit. Not drastically, but from time to time. You wouldn't get back to the characters you wanted soon enough.
He also introduced some new and interesting characters in the Xan.
This was an interesting alien race and you didn't really get to know them enough.

I’ll buy the last in the series... eventually

The story was decent, but not captivating. The two storylines connected well, but the alchemy world was less effective. The narrator too was decent, but at times the accents were too much. Still, I’m interested enough to come back for Part III at some point

I really enjoyed this book. found it very entertaining and great at world building. loved how they built up the xan. plus I loved the references to science fiction like firefly and such. gave the main universe characters a lot of depth.