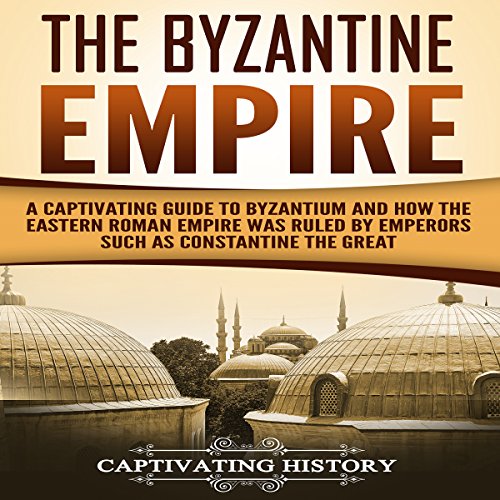 If you want to discover captivating stories of people and events of the Byzantine Empire then keep reading....

The Byzantine Empire was founded during the chaotic third century. It was the time when revolts and civil wars were common, and Roman emperors merely lasted for a year. Despite being one of the most captivating historical periods of all time, the Byzantine Empire is a lesser known one, and it's rare to find an exciting resource on the topic.

But that is about to change. In this new captivating history audiobook, you will:

All this and much more awaits you, so get instant access now by downloading now!

What listeners say about The Byzantine Empire

The author has a breezy style that entertains while still imparting competent material on a much misunderstood time in history. I am beginning to really understand why and how Constantinople and the Byzantine Empire are so important to understand civilization after the fall of Rome. Great work!

This is an amazing book, and it very challenging, written skillfully at the highest levels .The author has written a truly magnificent book full of subtlety, irony, and meaning.

Discovering the history of Byzantine Empire

Really great book for discovering the history of Byzantium. It's packed with information, but keeps you engage throughout the whole book.

Be an informative citizen

Very interesting. He is a great story teller and outlines the history of Byzantium in a very organized fashion. I highly recommend it.

Not the fault of the writer as he accomplished what he set out to do-a very good history of the entire period of the Byzantine Empire. This he did with emphasis on the Emperors and the Patriarchs. While I gained a great deal, I know that I will have to read specific books about specific periods to gain more knowledge.

this was a very clear, easy to listen to and informative series of lectures on a subject that has been generally neglected and few know very much about.

the information and guidance in this book will help you find your forte in the world of work and help you get along better when the expected happens and you have to work together with a space.

A good look at history

Each lecture is 30 minutes in length and overs a distinct and yet interlocking topic. The lectures precede in chronological order, which makes it very easy to follow. Extremely well done.

It opens to our view an important history of the West that is typically hardly touched on in most historical accounts. It is well written and is easy to understand but oddly, it's not a compelling read that you can't put down. Nevertheless, it is interesting and quite informative.

Really great book for discovering the history of Byzantium. It's packed with information, but keeps you engage throughout the whole read.

This book is not about the Byzantine Empire, it's only a list of emperors and their accomplishments and failures. It sounds as if it was writhen at the 5th grad reading level and it is not even a good summary of the emperors. The author also bizarrely veers off the path to condemn icon veneration and praise iconoclasm halfway through the book. I would recommend a Wikipedia article over this.

Written at the level of an undergraduate research paper

The narrator mispronounced so many names and even simple words like “simultaneously”.

Narrator seems to read like a robot, pausing too long on commas, not pausing on natural breaks in the paragraphs, and leaving gaps where you are confused which sentence starts where. One of the worst "audiobooks" I've ever listened to. It's barely 2 hours long, and is more like some person who knows nothing about history or the world, reading snippets of Wikipedia to you. I am rating a 1-2 star and returning this "book" to get my money back. Not ordering any Captivating History books ever again. Super scammy, and I should have listened to the sample! But the reviews were so good, which makes me wonder who would actually give this a good review? Literally every single sentence that he reads, with commas making a list, cause him to read in the strangest inflections and distracting pauses.

Some words that the narrator seems to have never seen before reading this: Croatia, sepulcher, etc.

I am 41years old and I love this series from Captivating History team. I've learned so much from these books. They're extremely informative and certainly most fascinating. I've learned more from this series than I did from history class in school.

Like most of the Captivating History Books, this one is a well written short read. It covers the basics, contains details and sparks your interest to continuing one's research on the subject. Highly recommended.

I enjoyed listening to this book.

A is a decent book but I touched it could not decide if it was going to be a technical book on weapons and armies or a vivid account of those last months of Constantinople .It tried to do both in great detail and became hard reading in the telling.

A good book, a good addition.

Audible format of this historical book has merit for providing a quick summary of the key elements of historical scenarios and is an excellent precursor to a subsequent more detailed analysis of points of interest that may emerge from the overview.