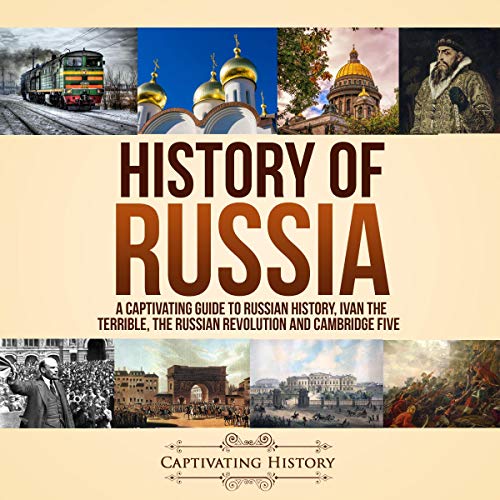 If you want to discover the captivating history of Russia, then pay attention...

Four captivating manuscripts in one audiobook:

Some of the topics covered in part one of this audiobook include:

Some of the topics covered in part two of this audiobook include:

Some of the topics covered in part four of this audiobook include:

So if you want to learn more about the history of Russia, get this audiobook now!

What listeners say about History of Russia

An enjoyable and informative listen presented in manageable bitesizes that kept my attention. Very necessary for a quick understanding of where Russia is coming from during these days of their war with Ukraine. I am particularly grateful for the section that covered Ivan The Terrible. I would recommend this to anyone who wants a short introduction to the history of Russia.

The title, "History of Russia," is misleading. It should be entitled something like, "An Anthology of Russian History." The first 4 hours and 40 minutes is a superficial recounting of 1000 years of Russian history. This is followed by a history of Peter the Great, Next up is a history of the 1917 revolutions and the creation of the USSR. I don't know what comes after that because I got fed up. The two readers to whom I listened mispronounced common words and place names with abandon. Examples: Leipzig, magnate, gendarme, dynasty, etc.

Very nice written book, not at all heavy as a book

This is a very good book for those interested in Russian history, particularly the very early years. Have enjoyed it a great deal.

listen to this audiobook and understand the Russian bear.Captivating History whose thorough review of facts is deliciously melded with amusing information and stirring prose.

A good Place to Start

I hope you enjoy this audiobook, and I believe it gives you a better grasp of the Russian people. They are a great nation, and it would be good if more Westerner's understood them better.

A walk through Russian history.

It's mostly factual information. Any of the authors thoughts and opinions are purposefully easy to identify.

An amazing audiobook on Russian history, having heard it cover to cover twice, I find I am always learning something new each time.

I needed a sense, a understanding of the country and this book gave me that. Russia is a country I knew little about and this helped immensely.

Very easy to read unlike most academic history, and unlike many pop history books, the book is factual. An excellent introduction into Iranian history.

One of the very best insights into the history, belief, and minds of our counterparts in the East. This is an excellent book for anyone who wishes to know more about a fascinating country and peoples.