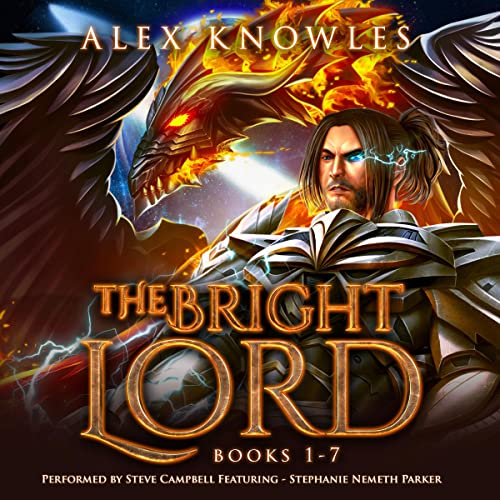 By: Alex Knowles
Narrated by: Steve Campbell,Stephanie Nemeth-Parker
Try for £0.00

A home, a family. Lies, resentment. To save the future, he must reclaim his past.

Ryan Hart thought he had saved them all. He'd served as Lord Commander of the Sarashead guild, faithfully and with honor for thousands of years. His work expanded their empire and brought peace.

Emperor Duhan has been murdered, ripping Ryan out of his new life as a citizen on Earth. Once again, he must leave those he loves for the greater good.

Rebirth is the path, a reset into a new body that he must cultivate and train. The collision of two worlds draws ever closer, and if he can't claim what was once his, all will be lost.

The Bright Series is an epic Sci Fi LitRPG Cultivation story. This encompases all 7 books.

What listeners say about The Bright Lord: An Epic Sci Fi Litrpg: Books 1-7

Only bought the publisher pack

I am so grateful for buying the publisher pack and not wasting money on books. This is soooooo boring and I could not go past book 3.

Do not buy this book. The story is so depressing and down=beat I had to stop listening. There are much better books out there.

This book got everything

I laughed, I cried, I even cheered...
It ran the whole gambit and I enjoyed every single moment I spent with this series.
My biggest complaint when listening to the books was the lack of recap between books, which isn't a problem now with this box set.
Alex writes big and the story makes you feel big as well... It's a ride like a Holywood movie and you got front row tickets.

Steve Campbell performed his heart out for this series, and it was his performance that brought me to tears, that make me laugh out loud and he deserves so much credit for elevating a already great series to a whole new level...
She would be proud of you my friend

Full disclosure: I received this book as a gift from the narrator, but I already owned the books in the series, so giving a honest review here isn't hard.

Pass this one by

This is not a litrpg, no really character building. Main character goes from dead to grand master without any real effort or anything. Just all over the place a real mess.

the author didn't know what he wanted to write.

What an incredible series!!

I'm going to review every book in this series so be prepared for a heck of a ride.

I've been listening to this book on Audible and have loved every minute of it. To be able to start the story the way Alex did is just incredible.  He didn't mess around and just jumped straight into the meat of the story. Also, being able to see the ways the MC grows is just absolutely incredible. It's almost a little like the beginning of an Academy book except that it's better. Also, you have Steve Campbell narrating!! I don't know what it is about Steve Campbell's voice that just puts me in a relaxed state but it feels like a cozy warm blanket wraps around me every time I hear him as a narrator for a book. This is an excellent book that everyone should read!!

This book blew me away!! It's all about family, love, and those you care about being looked after and built up. The MC is all about looking out for everyone that he meets and works with. Also the fact that every advancement he makes comes about because of how much he cares about all those he has brought into his sphere of influence.  This book is all about how we can overcome any disadvantage when we lean on others to help us! If you live a good MC putting one foot in front of the other and taking each problem one step at a time with a good team then you have to get this book!!

This book is quite the Rollercoaster ride from the start all the way to the finish. Ty is just an incredible Main Character but he wouldn't be anything without his backup, RJ!! This book builds so many characters up and gives them more opportunities to grow all because Ty just wants them to have the opportunity. Y'all should really check this book out!!

This book was a real surprise to me because it was a whole perspective given but it did not disappoint at all!! Ella is exactly the kind of woman you want on your side!! She is tough, stubborn, strong, and a real badass! The story wasn't what I was expecting but it was exactly what I needed. She is an immovable force that once she gets going you better get out of her way!! Look out for Ella cause she will surprise you.

Wow! What a Rollercoaster ride this story is!! To see Ty face life head on and not letting personal feelings get in the way of accomplishing your goals makes this book so incredible.  I loved seeing that there's no limit to the strength you can gain by merely pushing forward without looking back and not letting your past control your future!! If you enjoy dungeons this book is for you!!

Sheesh! I thought this series couldn't get better but once again I'm proven wrong!! Ty has just gone to help Juten unite her race and boy is it a doozy of a fight, but in the end when you trust those you love nothing is impossible!! This series has everything that a Battle Fantasy fan could ever want!!

Ty has just gotten stronger as he trusts in his friends, faces his fears, seeks out the best parts of himself and never gives up on those he loves!! RJ is so much stronger because of the love he has and because he doesn't let his past dictate his future. The only thing I was disappointed about was that it's over! I just wish there had been an epilogue but I would never be disappointed in this book!! It is everything a fan of fantasy could dream of. Don't hesitate to  get this book. You won't be disappointed!!

So glad I gave this a chance

This book is fantastic. Compelling, action packed with more than a little intrigue and uncertainty. Everything I didn’t know I needed it to be. The narration is spot on with tons of inflection and variance between the characters. One of the best books I’ve read/listened to in a while.

One of the Best!

I absolutely love this series so much! I think it's one the best I have ever read/listen to! It made me laugh, cry, and hope. The story was well-written, action-packed, intriguing, and heartwarming. Alex Knowles has created this wonderful cast of characters. They were all fascinating and lovable.

Steve Campbell's performance was absolutely outstanding! He has elevated the story to another level! It was his brilliant performance that brought all the emotions out. Well done, sir!

I really liked this series. Glad it was sold as one set as the individual parts are way too short. Well written and narrated.

Why does this book have good reviews..... I don't understand it. This book is a downright snooze fest. Very rarely do I just stop a book mid and go search for a new series to read. This series is among thst very small list. I am beyond underwhelmed. Also, the narrator has zero range of voices, and it's a struggle sometimes to know who is talking.

It's also one of those books were every part is cliche and easy to guess, and also uses a ton of "plot armor". I'm a super powerful guy who quits without really finishing off any of the bad factions that threaten me and would most likely hunt me, and then I get resurrected into a dead body that's so weak that I cant use my power, into a facility that suppresses my power, but on a planet thats super powerful, all the people I immediately interact with are conveniently superpower full that just need development, and and to further the plot I have a tracking parasite in my head the bad guys can follow, oh and when I throw temper tantrums I can create massive earthquakes.

Alongside that whole debacle, nothing is really explained or developed, so at the every chapter I end up asking more questions about why the stupid things that happen, happen.

While the stpry is ok, throwing a few numbers in a couple of times in each book does nothing to the story.
There are no game mechanics.
No link between the numners and the story apart from thw numbers getting bigger.

Although the pacing was quick and some things resolved to easily, I was moved multiple times during this piece. Glad it came as a set. It helped to propel me through.