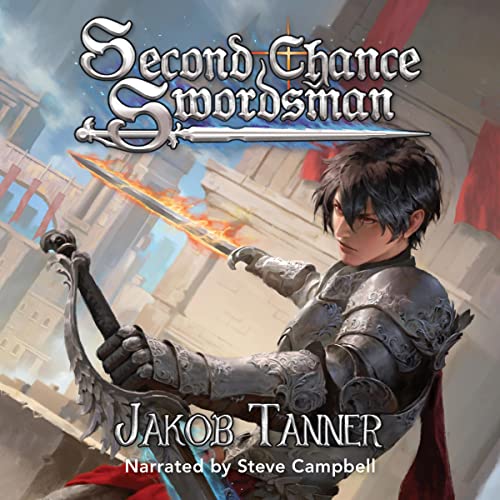 By: Jakob Tanner
Narrated by: Steve Campbell
Try for £0.00

One warrior. One mission. A second chance at stopping the apocalypse.

Sam watches the demonic forces of darkness as they engulf and destroy the land of Westria.

The final battle is over.

Or so Sam thinks.

In the last moments before the world’s end, Sam is given a second shot to save everything he holds dear.

He’ll be sent back in time.

Reincarnated into his younger self and armed with knowledge of the future, Sam will have the power to undo past mistakes and give the people of Westria a fighting chance against the impending apocalypse.

Can one swordsman change history for the better?

Lord of the Rings meets Back to the Future in Second Chance Swordsman, a new reincarnation LitRPG/progression fantasy series from Jakob Tanner, best-selling author of Arcane Kingdom Online and Tower Climber. This book features time-travel reincarnation, awesome battles, and ranks as a form of power progression.

Pick it up today!

Can you save the world that burned?

Genre: LitRPG fantasy
LitRPG system: Class and stat based. Classes have special abilities that rank up independent from stats.
Explicit/adult material: None.

Summary:
The world is ending. Sam watches it end powerless to save it, when he is suddenly sent back in town to remake his choices to help save his world from its terrible fate.
He is now once again an orphan at the bottom of society, but blessed with his memories and his class already unlocked (though once again level 1), he must figure out a way to leverage his knowledge to make the difference and save everyone.

Narrator
Voice diversity: Good, but dual narration would have allowed for even better diversity. Especially female voices become a bit similar.
Pacing and intonation: Extremely good. The atmosphere of the scenes are masterfully conveyed.
Overall: 4.5 / 5 stars.

The book’s strengths.
- Great narration
- The way the book deals with MC defeating enemies beyond his own power level works really well and doesn't feel forced.
- I like the way the story is told from changing perspectives.


The book’s weaknesses.
- Two characters, Toby and Alice are both quite annoying and play important roles. I hope and think that they both will grow into likeable and important characters. But the bad starting point feels too bad.

Overall: 4/5 stars
A good start to a new series and definitely also a book that can stand on its own.

loved it cannot wait for the second one

this was great love a good back in time litrpg. i like that it was easy to understand some litrpg can be to complicated i found this a good balance hope the second book is just as good

to be honest if I was younger I think I would have liked this but to be honest it's very juvenile, magical world but main character is called Sam... got to chapter 47 and they'd only just gotten out of the white gate, both too slow paced and too fast paced

Just perfect. If anything, it was way too short. I hope a book 2 releases soon

Enjoyable and a great weekend listen.

I really dislike how audible does reviews. The three five-star ratings don't tell much.

The characters:
Sam: I give him an 8.5 out of 10 for an mc. Sam is young and traumatized but doing his best and making reasonable choices. He was never meant to be a know it all. He has to make mistakes to be able to learn from them.

Klara: I give her a 7.5; I think she will grow in future books. She does a good trying to keep the orphans together.

Toby: He's the character that makes the book. He is the person you are designed to hate. He represents all of our insecurities. Toby grows in the book.

The princess: she's the least developed of the group; even so, Jakob does an excellent job at bringing her to life.

I enjoyed the straightforward mildness of the book. So many titles go over the top with horror, gore, tits, and ass.
The whole story kept me tuned in, and I appreciate the effort Jakob put into his plots and fight scenes.

Steve Campbell does a fantastic job at narration. Steve delivers the pauses, emphasis, and tone excellently. This is my first exposure to Steve Campbell as a narrator, and I am impressed.

There is a big push for duet narrations, and after nearly 1200 audible titles in my library, I can count on one hand how many of those, duet narrations have been exemplary. I find duets interrupt the flow, tone, and mood more often than not.

A 1-star book could be a very dry topic, story, crude, or someone preaching to the reader. I generally don't have 1-star books. I will return them and go my own way. My last three were from the same series, and I had hit a very dry spot in my listening.

A 2-star story would be a story that was phoned in by a writer that typically has done much better work. I have a couple of reviews from authors that just seemed to phone it in, one most recently from an author that decided to mix current politics into his novel. If I wanted that, I would just watch the news.

A 3-star review is where I start. It means I enjoyed the book. That I did not have a hard time following it (I have lost a lot of my conversational hearing). That the story kept to a plot, the characters were not static, and the world built was plausable.

A 4-star review is something that I really enjoyed. It puts the author on my map to keep an eye out for. I go through 12-15 books a month. (audible is my primary source of entertainment. ) I will search for the author's works regularly and seek out their stories for future purchases.

A 5-star review, These are not as rare as one would think. These are the books where the characters grow, learn, and act according to their nature, where the world is not only plausible but believable. Where there are economic systems, businesses, and rules of law that make sense. Where the story is woven, progressed, and told with caring and dedication. These books, series, authors, and narrators bring it all in a package.

So, when reading my reviews, if anyone does, that is how I judge the books.

Struggle to finish. This is more for a child around 10 than an adult. I was excited because I love reincarnation books, but Sam's friends where obnoxious and didn't add to the book.

Nice entrance for a going back in time book.

I admit I was hesitant to read this book, but when the opportunity to listen to it came my way I jumped at it. I have listened to this duo before in the Tower Climber series and have found both the author and the narrator to be fun. This book tells us the story of a powerful warrior being sent back in time to fix the past to create a new future. The best part is that it is done in a fantasy setting and no so much Earth. It is a minor change, seemingly, but really helped me to connect to something that was different.

The story moves along quite well, the main actors are believable and connectable. The plot is decent. The bad guys are obvious from the beginning, but the power gap is such that little can be done. This is the baby steps and the foundation for further adventures of fixing the idiocy of Westria.

Steve does a fantastic job of bringing the story to life. Again, I have listened to Steve do many books now and I must say he has gotten nothing but better as time goes on. Happily looking forward to hearing book two in the future.

A second chance to save the world

Gates have been forming across the land. These gates lead to a realm of monsters where there is treasure and power to be had. However, gates open both ways. These gates lead to the destruction of all life on the planet. In the last desperate moment, a goddess selected a dying soldier and sent him back into the past. Sam retains not only his memories, but also his class. Maybe it will be enough to stop the destruction of the world.

I really enjoy these time travel stories. It’s fun to see him apply his knowledge of the past to help his mission. This book is early in him being sent back, but there are already being ripples that have changed and force Sam into unfamiliar territory. Fantastic action scenes. It brings up great Oblivion memories! Best of all, there is a bonus epilogue ebook or audible for free on Jakob’s fan page. Steve Campbell does amazing with the narration.

Yet another fantastic book by Jakob Tanner

Second Chance Swordsman is absolutely awesome! it has everything a reader could want, great characters, intriguing storyline, humor, tons of action and epic battles, and even a touch of romance. Jakob Tanner has created yet another fantastic addition to the Tannerverse. I can't wait to read what comes next for Sam & his cohorts.

sets up the world, characters and their goal going forward expertly.
has great fight scenes and stat progression...
and the characters are great!

Steve does a great job, you can feel the emotions and the voices are so distinct you never doubt who is talking

Man I was struggling to finish this book I found the characters to be annoying especially Toby like I just wanted to end the book when he talked. Mc is just dumb and I don't even know how I finished this book.

The Hype Is Real!

I immensely enjoyed every minute of this book! It's an excellent series starter. The story is well-written, super fun, action-packed, and entertaining. There wasn't any dull moment. The characters were all lovable and relatable. Yep, even Toby!

As always, Steve Campbell did an amazing job with the narration. Well done!

I can't wait for the next installment.

After taking part in humanitie's last stand our intrepid hero gets sent back in time to try to make things right! Dungeons have come to the land and humans must band together or face extinction!

I really enjoyed this book and can't wait to find out what happens next!!!