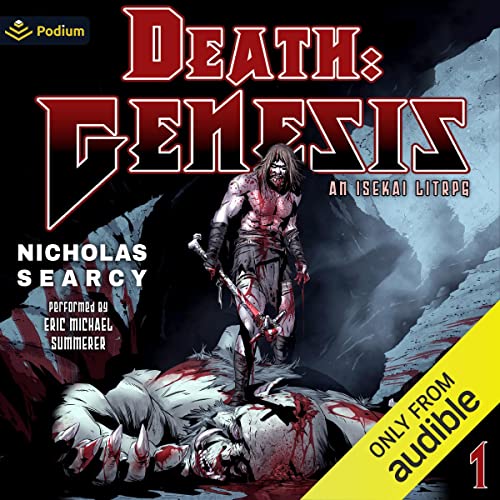 By: Nicholas Searcy
Narrated by: Eric Michael Summerer
Try for £0.00

Death is only the beginning in this brutal and bloody post-apocalyptic fantasy about humanity’s next phase.

In pursuit of his abusive father’s approval, Zeke Blackwood pushed himself to the very pinnacle of his chosen obsession. Since childhood, all he’d ever wanted to do was play baseball, and through hard work, discipline, and no small degree of talent, his goal of reaching the major leagues was finally in sight. But then a horrific car accident ruined his arm, eliminating any hope of a professional baseball career.

Consumed by depression, Zeke gave up on his future, preferring to wallow in self-pity. That is, until an opportunity came along for him to prove his worth. When his chronically ill younger brother needed a kidney, Zeke didn’t hesitate to offer one of his own—only to die on the operating table.

But eons later, after Earth has been ravaged by disasters both natural and man-made, Zeke is reborn. Guided by the mysterious Oberon, he soon finds himself in the Radiant Isles, a magical land populated by legendary creatures and horrifying monsters alike. A war rages between good and evil, and Zeke—along with the rest of humanity—has been recruited onto the front lines.

Fully healed from the wounds of his previous life, Zeke battles his way through an army of trolls and other subterranean beings, all the while increasing his skills, improving his strength, and gaining superhuman abilities. Finding allies in Abby, an archer who teaches him about his strange new circumstances, and Pudge, a helpless cub who’s become soul-bonded to him, Zeke must keep collecting victories if he’s to survive in this merciless world.

The first volume of the hit LitRPG fantasy series—with more than 700,000 views on Royal Road—now available on Kindle, Kindle Unlimited, and Audible!

What listeners say about Death: Genesis: An Isekai LitRPG

This is definitely In the top 10 in my audible collection!
Hits all the right spots

a hack and slash litrpg

Did you enjoy the beginning of defiance of the fall before a bunch of characters were introduced? You will like this book.

Nothing deep but the system is reasonable and the world has just enough mystery to keep you interested. Just know what you are buying.

it's like the fat was removed and was only left with meat. this one was a winner in my eyes. I will be buying book 2.

I thoroughly enjoyed this book, I just couldn't stop listening, I actually had to force myself to stop just so I can sleep.

Can't wait for the next one. It is nice to see the MC grow mentally for once in a book. Hope he can just realize that flaunting wealth when he is low level makes him a big target. Who knows though it could lead to some good fights.

Book starts off with the MC struggling and piles up the bodies to get ahead. That is always a good sign. I love OP characters, but I love OP characters who struggled to get to where they are more. With that being said the book is going somewhere and I cannot wait to see where it is going. hehehe. Keep up the good work

There is only so many time you can reference how it relates to baseball before it gets repetitive and throughout the story they touch back on the same concepts of why the main character is the way he is multiple times saying the same exact thing, making it a little hard to get through.

I am so looking forward to book two. I have listened to many books in this genre and this is by far the best. There is intelligence and nice character development

read at your own risk

Couldn't finish this. it felt like the character had no true direction and was frustrating for him to just " know" by working on runes and curses to understand them without any real explanation. doesn't feel like there was much in the way of character development and too much self loathing. save yourself the time since first half of the book feels like I'm listening to a record skipping and repeating itself. you get some litrpg elements but seems like they get forgotten and nothing more than the character themselves having to tell you " and I got stronger" all the time. all tell and no show in my opinion.

meh it was ok

the story and world are a bit bland. like good ideas but nothing really new here. the MC puts in effort and does stupid risks to gain power so it feels cheap for the MC to just accept people calling him a cheat. Also, the end setup seems like the MC is gonna be nerfed due to being around humans.

Three and a half maybe four.

I choose this rating because the MC can be a tad bit aloof. As well as I thought we would see more progression of the MC instead of him slow (Uber slow) grind. I would suspect that at level 25 the exp needed would need to be higher but it took buddy almost three years to hit level 10! But that’s just my complaint over all its good. A lot of fighting and coping with new world integration. Worth the credit.