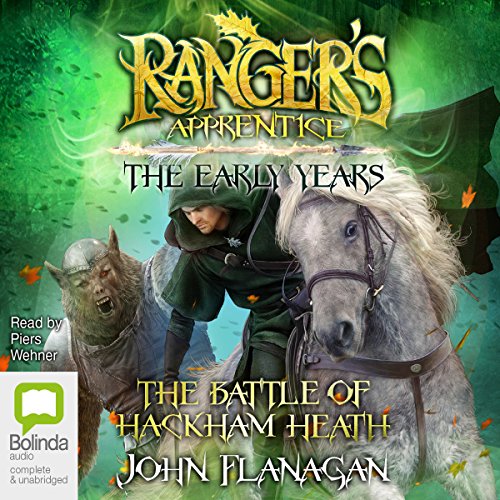 The Battle of Hackham Heath

By: John Flanagan
Narrated by: Piers Wehner
Try for £0.00

What really happened at Hackham Heath that made Halt a hero to the entire Kingdom? This is the prequel Ranger's Apprentice fans have been waiting for.

When the former Baron Morgarath escaped to avoid punishment for treason, an uneasy peace fell on Araluen. But the Rangers know Morgarath will be planning his next move, and there are rumours he has recruited an army of savage, inhuman creatures. Newly crowned King Duncan must prepare for war.

Halt prepares for a seemingly impossible task - climbing the deadly cliffs of the Mountains of Rain and Night and venturing deep into enemy territory to spy on Morgarath. Meanwhile, Crowley must ensure the Queen's safety as she undertakes her own perilous journey for the sake of her unborn child.

Morgarath's Wargals seem unstoppable against Duncan's depleted army. The winner of this war could be decided by one wrong move. At the Battle of Hackham Heath, the fate of a Kingdom will be decided.

The origin story of how Halt came to be Araluen's most famous Ranger - and how war will decide the future of the next generation - will thrill Ranger's Apprentice fans and new listeners alike.

What listeners say about The Battle of Hackham Heath

It was very entertaining

The story was well done, not rushed or pressured. It was like John had an entire story behind what happened in the early year that just so happened to answer the questions people have had, and not the other way around

Overall, worth a listen to for all you Ranger's Apprentice fans

The ranger appreciate is the best knight in shinny armor fantasy book series. Many hours of great entertainment