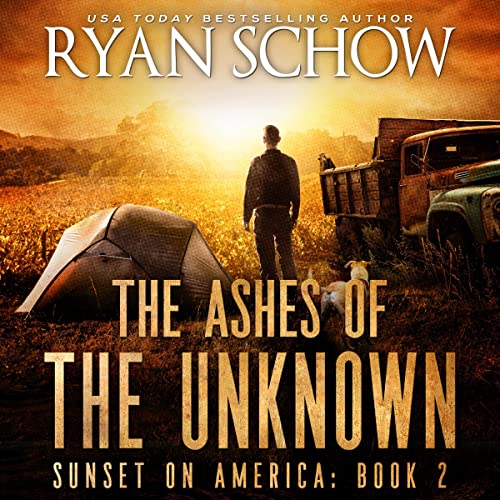 The Ashes of the Unknown

He came home to a town in turmoil….

…and a brother he thought he’d lost forever.

But like an EMP strike, family ties wield immeasurable power.

Cody Banks destroyed his life before enlisting in the Marines. But tough decisions in America drained the military’s resources, leaving the nation vulnerable to attack. When Cody’s detachment returns to a powerless country, he finds himself steeped in the blood of a brand new war. His enemies are swift, brutal, and at times, scattered, but to get back to Burning Hollow, he must crawl through the middle of hell.

The battle for freedom is just beginning.

With casualties mounting and parts of the holler in ruin, the tides of power shift once more, ushering in an unexpected horror: enemies posing as saviors. The National Guard has shown up in Burning Hollow, but are they friend or foe? While Rowdy and Taylor fight to keep their family together, the cartel descends on the small town with a new, more terrifying agenda in place. But vengeance is a cruel mistress that cuts both ways, and not everyone will survive Pablo Santiago’s wrath.

Who will defend Burning Hollow from its many enemies?

With unknown forces at war around them, and bad factions posing as good, how can normal citizens tell friend from enemy? If the town is to survive a vindictive brother, a bloodthirsty cartel, a skilled vigilante, and an encroaching army, they must form a stronghold able to withstand asymmetric warfare and sabotage. But is this a case of too little too late? Or do they have a fighting chance?

Will there even be an America left standing at the end of this war?

Will an EMP strike and a collapsed society deliver a fatal blow to Burning Hollow? Or will its citizens dig in, protect their homesteads, and safeguard the community? With enemies everywhere, and a full-scale apocalypse on the horizon, will they have what it takes to survive? Would you?

Experience USA Today best-selling author and number one post-apocalyptic fiction author, Ryan Schow, at his very best in the series early readers are calling, “The perfect escape blend of Yellowstone, Legends of the Fall, and the apocalypse.”

Pre-order the entire series and get each new book the moment it arrives!

This five-book post-apocalyptic survival series has no coarse language, explicit sex scenes, plagues, or zombies, but does contain some mild violence similar to that of a PG-13 action and adventure film. Perfect for fans of A.G. Riddle, Kyla Stone, Franklin Horton, Jack Hunt, Boyd Craven, and Bobby Akart. Suitable for ages 13 and up.

Books in this series:

The Ashes of the Unknown

A Confluence of Tyrants

The Resurgence of Patriots

What listeners say about The Ashes of the Unknown

The violence is graphic. No swearing so far. Very realistic as to what can happen.

Continuation of great characters Love the dude with the” seeing eye cat”
Narration spot on too. Brings the total chaos and humor thru out book- keep it going

I like this author and always enjoy Kevin Pierce. Just trying to figure out how, and if, I can get Book 3 on audible while I await book 4 in January 2023.

This series is great! A great mix of comedy, violence, and family. Definitely worth a read.

Great story great narration. Another great read by an up and coming author. Loved it

Ryan Schow never disappoints! And I can always count on Kevin Pierce to bring everything to life in my mind! This series has it all! Humor, empathy, and sit on the edge of your seat action!
Love, Love, Love!

New twists on our favorite apocalyptic scenario! Definitely enjoying so far! Ready for book 3 for sure.

I loved this book by Ryan Schow. I also loved these characters. I can’t wait for the next book in this series. I would recommend this book and all of this Ryan’s books. I listened to this book on audiobook.

Ryan managed to keep the character arcs just as interesting as the main plot. As the foreign invaders systematically sweep the east coast the fights takes on a new dimension when they arrive near Burning Hollow disguised as national guard. Just the right amount of tragedy and triumph to keep from leaning too far with the story.

Definitely worth a listen, it is cool to listen to what Cody did to reach Burning Hollow. I also enjoyed the absurd moments with Bartholomew and Catrick Swayze. The only criticism I have is of the narrator, his voices for foreigners (Mexicans, Arabs, Russians, etc.) are all the same voice, and sound nothing like any of those, if I had to label it, I'd say it's like a Native American sounding voice, but it's just a minor thing.