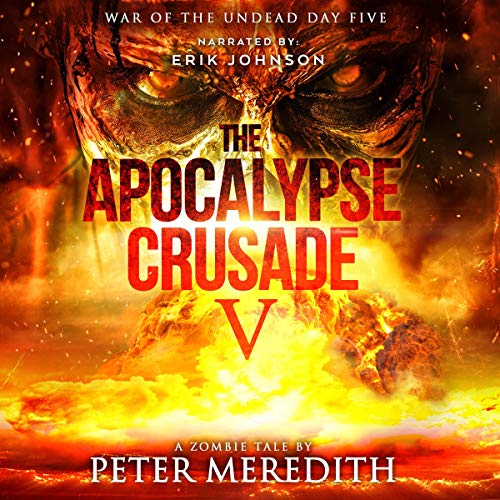 The Apocalypse Crusade 5: War of the Undead Day 5

Five days in the grinder. Five days of endless pain and no sleep. Five days of the hardest work imaginable-it’s the work of surviving and not one second of it has been easy.

The fifth day begins in a bloody fight that stretches across the globe because, as you will see, the consuming hate, the greedy hunger, and violent anger found in the zombies was not instilled in them by the infection. No, these traits were already there even before they turned. These are human traits and they are never more apparent than when our backs are against the wall.

From the Staten Island kindergarten teacher, to the Armenian plumber, to the Chinese shoe salesman, all the things that makes zombies so terrible is a part of who we are.

Those of us who can fight against these urges are called the good guys. There’s very few of us left at the beginning of day five and by the end...well, you will have to see for yourself if there are any good guys left when the clock strikes midnight on humanity.

What listeners say about The Apocalypse Crusade 5: War of the Undead Day 5

Amazing boxset that ended really well! Thank you Peter for the closure! Phew! Feels like Iv been through a cycle of all sorts of emotions! Great read/listen and an even better narrator!!

Ive read a few zombie series over the last few years and I would say that this is amongst the best! Great characters and well read! The US president ( very like the present one in power) plays a good Roman emperor type who falls under the spell of power and madness while his military doesnt know which way to turn allowing the outbreak to grow when it should have been ended before it started!
Overall a very pleasant and entertaining listen!

Great series overall but the ending really let it down, way too sudden and lacking any kind of substance.

love the whole set of audio books. one of the best collections on audible by far

Absolutely loved this entire series, kept me gripped until the end. Will definitely listen to more of Peter Meredith, and narration was spot on by Erik Johnson...

Absolutely loved this one.

Have lived with these characters for five books consecutively over two weeks or more so I found the main protagonist becoming almost like real people,some who remained throughout the entire event in one state or another.Others came and went despite being central,critical even.Giving certain zombies a voice was a nice touch.
I'd find myself heading into work at 4am in the pitch dark listening through my phone plugged into the dash and almost checking there were no undead in the car park at work when I got out the car.I would get so absorbed into the story I actually said to myself at one point ,it's ok it is just a story zombies aren't real....or are they :)

absolutely loved it, the only thing I didn't like is when it ended. Jamie Lynn was a great little thing had me scared just at the thought of her, she's what nightmares are made of. fabulous

loved it from start to finish very good, the guys reading the books is obviously a bibliophile and this does with an amazing read.

Please give us MORE best series since zombie fallout series. Loved the rollercoaster ride of excitement !!

love this book. I downloaded the first three and was overwhelmed with excitement to find out there was books 4 and 5 as well, I've listened to it once and I'm damn sure I'll listen to it again

Not what was expected.

Goes from a series centered mostly on a specific group of characters (many of the main ones succumbing to the advance of zombies) to one that gives mini stories on different new characters as they die in the advance of the zombie nation. Not where I’d hope the story would go. The old characters who survived to this next book in the series are mostly the evil creepy ones. The few original “good” characters that appear in this book do so rarely and there is no happy ending. Interesting overall but wished I’d stopped at the one before this.

I had stopped after about 2 hrs into the first book because the people were just so stupid I found myself yelling things like "Just do this" or " Just f'n run, or jump or smash that window." Even: "just go out the back f'n door." It was too much.
But one day I found myself with no money and no credits so I gave it another shot.

It got better. I like the fact it cover minute 1 from the main characters experience but also from the white house and president. And followed the army's deployment and fight against the zombies.

He is a good writer, there's no doubt. But his politics seeped in through out and this was not subtle. First of all, of course the president who lets it all go to crap and then....I won't spoil it, but of course he's 'weak, never been in the military-therefore useless, democrat'
Then there's the generals with all their right wing thoughts about the world.
And there's his description of a bad guy rapist. This is when I decided I would write my first review of any book. It was so ridiculous. He describes him as an addict/alcoholic. The drug of choice for the bad guy rapist? Why pot of course. My jeebus but this was ignorant and stupid. One 5 second google search and he would've have known pot was a stupid stupid choice. I mean this character was violent, sick and mean. Like, you know, pot smokers are. Not. Ever. Well I suppose there's one or 2 pot smokers who are violent and perhaps there's one or 2 that were somehow addicted to it and so he could be describing this one person. I suppose but well when one of the characters finds the bad guy's car, well the character could smell the 'cheap pot' and he knew it was that guy's. No, this is what the author believes about marijuana. And this main character knew the smell cause he's been around the seedy side of life where people smoke cheap pot, you know? Ridiculous.

Omg this made me loose all respect for this author. It's one thing to infuse your books with your right wing ideology, in fact I would find it impossible to write a book where my lefty leftiness wasn't on every page. But it's quite another thing to be ignorant about anything that you put in your book. And it wasn't the only time he got marijuana stupidly wrong.

So I will never ready anymore of this author. I'll say it again. He is a good writer. Shame, really.

Hopefully no spoilers in noting this is the final book of the crusade. Through 95% of the final book i kept thinking, "this is dragging out - can't believe they'll be a 6th" only to feel somewhat shortchanged when the book fell off an epilogue cliff at the end. This was a trilogy stretched out into five. The character development stagnated and the storyline became tedious and unsurprising except for one HUGE surprise at the end that was designed to be a "whoa no way" but came across as a "really - another game of thrones finale - no thanks". The last 15 minutes were rushed, unrealistic (yes yes even for zombie land), and lazy. I originally stopped at book four - the wrong characters were making it through and the right ones were either being killed, left in the lurch, or just petering out in value and storyline impact. I came back for the OCD-fueled $7 finish and regret it. To end on a positive point I'd like to mention how terrifying Jamie-Lynn and her pack of children were. That remained chilling and entertaining throughout.

this book wraps up the apoc series! very bleak! but also what a great book! now on to the spin off, Dead Eye Hunt

Not the ending I wanted

But oh well, what you gonna do, its a zombie book. Could have easily continued this series.

in every book, there's some dig at Jewish people. Him hating Democrats is easy to see too.

These was my favorite book of the series, although they were all great. The President was sooo frustratingly stupid. Although I must say after four years of Trump, He tried to overthrow the government, along with his ass kissing power hungry Accomplices

A Zombie series NOT to be missed!

I LOVED this series of books, each one as good as the last. I hope he makes a follow on series about the forbidden areas, and Jamie Lynn. I had to laugh about the President being an incompetent old fool, who was loosing his grip on reality.....hmm!!! The narrator was amazing, one of the best I have listened to. I'm definitely going to miss listening to these books, very enjoyable.

a bit of a let down

Not the end I wanted, and the epilogue seemed rushed. and a lot of whole were left in the story.