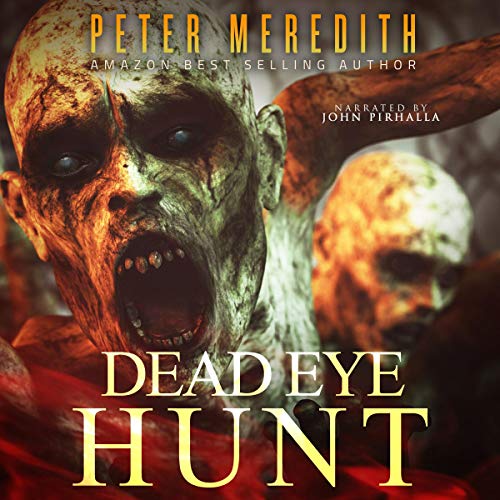 By: Peter Meredith
Narrated by: John Pirhalla
Try for £0.00

With zombie hordes swallowing the earth, mankind had no choice except to launch every nuke on the planet to stop them. Now, 150 years later, we live in over-crowded polluted cities, surrounded by vast radioactive wastelands. And no, we did not get all the zombies. They live among us, sometimes hiding in plain sight. Although the tattoos and piercings help them blend in, and the drugs help to contain their rage, they can never fully control their hunger. It’s endless.

When they give in and people go missing and partially eaten corpses start turning up, the Dead-Eye hunters are called in to clean up the mess. Their job is to keep up the charade that we're safe. They do it for a price. In this world, money talks. Cash is king. Cole Younger knows that better than anyone, and he is hot on the trail of his next buck when he discovers that the tables have been turned.

He’s not hunting Dead-Eyes, they are hunting him.

wonderful introduction back into the world of..

Apocalypse crusade!
This new series is completely separate (so far) from the original series so you don't need to read the prior series before this one. I would highly recommend it though just for the insight into zombies aka dead eyes. So it's something like 140 years into the future after the end of the prior series. The world has become an irradiated wasteland for the most part but humanity has been able to manage the zombie threat.. or have they? Join Cole, just another down on his luck ex cop turned hunter who finds himself repeatedly doing the right thing, only to have everyone out to kill him for it.
The most memorable part of this story was definitely Cole and his charge. Neither are perfect but in an irradiated wasteland, who is? It's their choices that set them apart from the rest.
I was sad to not see Erik back for a repeat performance, but John really does a great job and after finishing this story, I hope we get to see more of Cole voiced by John. The writing, while focusing on mainly the two characters is different from Apocalypse crusade, which focused on many people and because of it, we got a grand sense of scale. Even though this story takes place in one city and only two characters are followed, Meredith does a wonderful job of building the city up around these two.
If you enjoyed Apocalypse Crusade with its bleak outlook , you definitely won't be disappointed by where Meredith takes his universe's future.
Highly recommended!

Wow, this was an amazing read, it was long time ago I had a good book, this one was really good.

Can't wait for the next book!

This book brought to me a Oliver twist, ghetto poverty world that seemed so real after reading you feel you actually lived through these dire poverty, starving scenes from the chapters of this book. Dead Eye hunt completely transported me into these times, with amazingly exciting scenes...A brilliantly written story… I highly recommend this book… I can’t wait to start the second one in the series…

The narrator was good, but I found the overall story to drag at times. Overall it was a pretty decent book, but not something I would listen to again or recommend to most of my friends.

A Zombie apocalypse and radio active waste that wipes out most of the world. It’s believed that any Zombies left are outside the remaining cities. Only a very few people know the truth, one of these people is an ex-cop and Zombie hunter , the main character you’ll love .He gets himself in all kinds of trouble that keeps you listening. I couldn’t turn it off, it was really good.

as always a great read! can not wait to listen to more of your books