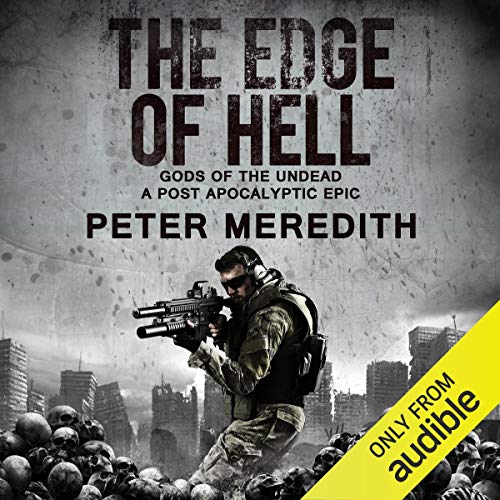 The Edge of Hell

The fall of mankind begins with just one man, a man who sells his soul piece by piece. Perhaps he does it with the purest of intentions or perhaps he does it because he's a greedy, grasping, evil son of a bitch. Either way the results are the same: Hell on Earth.

Jack Dreyden, a doctoral candidate in ancient languages, begins his road to Hell when he translates an ancient scroll that was never supposed to see the light of day. At first it seems to be the usual semi-coherent mumbo-jumbo found in every Egyptian burial chamber, but when Jack is attacked by the living remains of someone who had been dead for the last 5,000 years, he is thrown into an adventure that not only threatens his life and his very soul, it also threatens the entire planet.

The art of necromancy is suddenly alive and well in New York City and there is no room in this fight for a nice boy like Jack. He finds that the only way to beat a necromancer who can command the true undead by the millions is by getting his hands bloody and his soul filthy. He can only win by getting mean. By taking everything from his enemy, including his crown and his title: King of the Dead.

What listeners say about The Edge of Hell

Original and enthralling twist on the zombie story

I really enjoyed this very original twist on the zombie story. The book explores good versus evil, God versus demon and gives situations where the reader can question, "What would I do?" Brilliantly written. Gripping, taught, horrific and romantic at times. Very well read by Erik Johnson. He brings the characters alive and adds to the tension and horror. Highly recommend. I also highly recommend his 7 book series, The Apocalypse The Undead World and his 3 book series, The Trilogy of the Void. Brilliant.

This book gave me chills, it was creepy and original, and I really liked the egyptian mythology and biblical theme. This is a series I definately want to read more of and will be following, I can't wait for the next book. Erik Johnson's narration was dramatic and was perfect for this book. I received this book in exchange for my honest review.

Meredith does it again!

Would you listen to The Edge of Hell again? Why?

I would, It was a very different take on zombie/mummy stories. I enjoyed it!

Have you listened to any of Erik Johnson’s other performances? How does this one compare?

I've not listened to any before but I thought his change in voice between characters was much better than I've previously heard from other performers.

I'm a big Meredith fan generally, and whilst this wasn't as good as some of his other stories, it was still well up there among others of it's genre. I recommend it, even if the main character is a bit of a drip!

Was I listening to a different book??

Hell yes I would recommend this book to a friend - And have often. I have read or listened to literally 100's of books in this genre most following the traditional "Undead" Hollywood representations, expected of Zombies.

So this one doesn't! I look at the ratings it has received (3 stars atm) and have to wonder: How many people are going to miss out on a fabulous tale, just because some people will not accept an undead book that doesn't involve a virus or some government agenda, Then review books on what they perceive it was going to be about, and not, on the expert writing and imagination of the author.

My advice is - Buy this book, sit back and strap in - The author is about to take your mind for a spin you will be ever grateful for.

Interesting angle on the Zombie genre

First, full disclosure. I was given a copy of this audio book by the author as part of a random "comment on this and win" type giveaway he recently did on Facebook. Thanks Peter!

I really enjoyed and had a lot of fun with this story, the "how" of the zombies was very different, and the magic of this world has some excellent potential to be very interesting once it is explored in more detail. The characters were good, the action intense, and the pacing of the book flowed quite nicely. This is my first novel from Peter Meredith, and I will be checking out more of his books soon.

I would definitely recommend this book to a friend, and will listen to it again as a refresher when the next volume is released.

My only beef is with the narrator. He isn't awful, but he isn't really great either.

I don't really care about the authenticity of accents used. As long as a narrator attempts to use a somewhat different voice to differentiate the characters, I am totally ok with that. Erik delivers on this score well enough for me. Not everyone can be Jim Dale, after all.

I don't care if a metronomic cadence is in play during the "non speaking" portions of a narration. Michael Kramer does it, and his narrations are excellent. I think this is where Erik tries and fails to deliver, as much of his narration feels stilted and devoid of feeling, rushed in some places, too slow in others, and much over enunciation all around, like an actor practicing vocal warm ups.

Nevertheless, it does not make the narration unbearable. One of my favorite series is narrated by a man so boring that he is capable of vocalizing chloroform. I love, love, love those books, but I simply cannot listen to the narration. That is not the case here friends. Don't go into this expecting an epic narrator, and you'll do fine. It really is a fun story!

The storyline was an original take on zombies, but the execution was poor.

I didn't like the narrator's rather halting and odd delivery. But the worst of it was his attempt to do a British accent. It was absolutely appalling. Given that one of the major characters is (meant) to be an English aristocrat, every time that person appeared I was pulled out of the story.

Also the author has absolutely no idea how British people actually speak. The character's use of language was all over the place. From antiquated Jeeves and Wooster type idiom, to alleged Cockney. From the mouth of a supposed aristocrat. Terrible, terrible, terrible!

I'm asking for my credit back.

Peter Meredith has done it again !

It was a great story. It held my attention from beginning to end. Can't wait until the next one comes out.

The story had a different premise about the zombie apocalypse type story but could have been shorter. I could fall asleep, wake up an hour later and know exactly what was going on. I can actually see this as young adult book. Narrators voice grated on me after awhile. Main character Jack was whiny and not sure what to do.

If you have an active imagination this might be a book to walk away from. if you don't mind people dying horribly then it's all good. story starts off kind of slow but picks up the madness quickly.

ANOTHER DPELLBINDER FROM PETER MEREDITH

Meredith first got my attention with his zombie apocalypse series and had me hooked through the whole series as he skillfully developed benevolent and malevolent characters and unique plot twists. But, if his Apocalypse Wars series was a television mini-series, then The Edge of Hell would be a big production movie box office thriller!

This story has it all. A struggling student of Egyptian antiquities, his gorgeous, 20something, British third cousin, a good cop, a bad guy, and hoards of demons, spectors, ghouls, and aberations - all called up from an ancient Egyptian text.

Excellent read that is very cu4rent in delivery but harkens back to those great, scary Saturday matinees as a kid.

The story was surprise, started slow, got into the action pretty quick then slowed a bit. Action picked up towards the end which was good but ending a bit anti-climatic, seemed rushed. So I'm hoping there will be another to follow because it does hook you. There is good discribtive detail where the demons, death and destruction is concerned but I wish the narrator put a bit more emphasis in some the the more action sequences. Over all, good storyline.

A new twist on many old themes.

A new twist on many old themes. Demons, zombies, and Religion .Well played an enjoyable listen.

Not one of his best

Kinda silly really rushed the end just seemed to throw some stuff together. More like he just wanted to write "the end" and didn't want to waist the time he put into the book
He has much better work