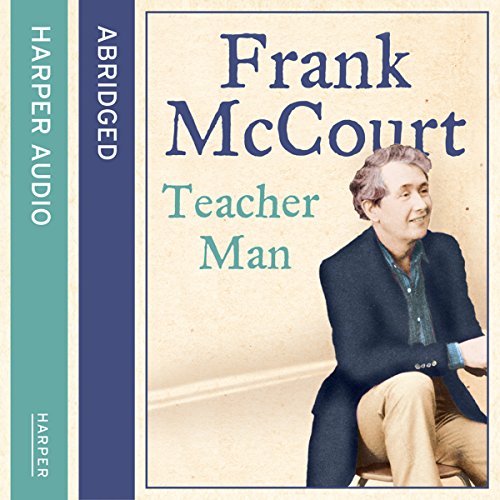 A third memoir from the author of the huge international best sellers Angela’s Ashes and ‘Tis.

In Teacher Man, Frank McCourt reads his own account of his illustrious, amusing, and sometimes rather bumpy long years as an English teacher in the public high schools of New York City.

Frank McCourt arrived in New York as a young, impoverished and idealistic Irish boy - but who crucially had an American passport, having been born in Brooklyn. He didn't know what he wanted except to stop being hungry and to better himself. On the subway he watched students carrying books. He saw how they read and underlined and wrote things in the margin and he liked the look of this very much. He joined the New York Public Library and every night when he came back from his hotel work he would sit up reading the great novels.

Building his confidence and his determination, he talked his way into NYU and gained a literature degree and so began a teaching career that was to last 30 years, working in New York's public high schools. Frank estimates that he probably taught 12,000 children during this time and it is on this relationship between teacher and student that he reflects in Teacher Man, the third in his series of memoirs.

The New York high school is a restless, noisy and unpredictable place and Frank believes that it was his attempts to control and cajole these thousands of children into learning and achieving something for themselves that turned him into a writer. At least once a day someone would put up their hand and shout 'Mr. McCourt, Mr. McCourt, tell us about Ireland, tell us about how poor you were.…' Through sharing his own life with these kids he learnt the power of narrative storytelling, and out of the invaluable experience of holding 12,000 people's attention came Angela's Ashes.

Frank McCourt was a legend in such schools as Stuyvesant high school - long before he became the figure he is now he would receive letters from former students telling him how much his teaching influenced and inspired them - and now in Teacher Man he will share his reminiscences of those 30 years as well as revealing how they led to his own success with Angela's Ashes and 'Tis.

”An astonishing book … completely mesmerising – you can open it almost at random and find writing to make you gasp.” (Independent)

”The most remarkable thing about Frank McCourt, apart from his survival, is his lack of sorrowfulness. Angela’s Ashes sings with irreverent Limerick wit. It makes you smile at the triumph of the storyteller.” (The Times)

”Writing in prose that’s pictorial and tactile, lyrical but streetwise, Mr McCourt does for the town of Limerick what the young Joyce did for Dublin: he conjures the place for us with such intimacy that we feel we’ve walked its streets and crawled its pubs.” (New York Times)

‘’’Tis is a work of great charm and power, perhaps even more so than its predecessor.” (Mail on Sunday)

”Few will be able to resist this pacey and fluent sequel…McCourt’s gift lies not simply in having lived through interesting times, but in having developed his skills as an editor and narrator to produce two fine, funny and moving slices of a past that is not simply Ireland’s, but everyone’s.” (Guardian)

What listeners say about Teacher Man

Was brilliant and made me realise how lucky I've been in life. Those poor children.

Very enjoyable - Frank McCourt has that flayer for teaching that cannot be taught. He writes with humour of his experiences teaching in the tough school of New York.