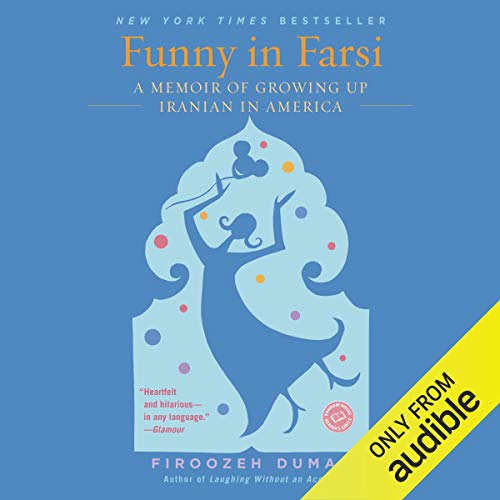 In 1972, when she was seven, Firoozeh Dumas and her family moved from Iran to Southern California, arriving with no firsthand knowledge of this country beyond her father's glowing memories of his graduate school years here.

In a series of deftly drawn scenes Funny in Farsi chronicles the American journey of Dumas' wonderfully engaging family: her engineer father, a sweetly quixotic dreamer who first sought riches on Bowling for Dollars and in Las Vegas; her elegant mother, who never fully mastered English (nor cared to); her uncle, who combated the effects of American fast food with an army of miraculous American weight-loss gadgets; and Firoozeh herself, who as a girl changed her name to Julie, and who encountered a second wave of culture shock when she met and married a Frenchman, becoming part of a one-couple melting pot.

An unforgettable story of identity, discovery, and the power of family love, Funny in Farsi will leave us all laughing, without an accent.

"Often hilarious, always interesting....Like the movie My Big Fat Greek Wedding, this book describes with humor the intersection and overlapping of two cultures." ( The Providence Journal)
"A humorous and introspective chronicle of a life filled with love, of family, country, and heritage." (Jimmy Carter)

What listeners say about Funny in Farsi

Very funny and true account! I feel I have lived this life myself. Loved it.

The melting pot, next generation

I am on a quest to read memoirs, and my search through Audible turned up this one, which I had not heard of before, but based on the blurb, thought it would be interesting. I met my first Persian in 1965, a fellow student at the University of Wisconsin, and when he told me he was Persian, I didn't know where it was, or what it meant. He was a sweet, gentle person, and while I know it was wrong of me to judge an entire nation by this one encounter, his charm certainly disposed me kindly towards his country. Now 40+ years later, I have met my second Persian, and based on my experience listening to this memoir, I am happy to say my first impression was correct. Firoozeh's voice and story make me feel like I know her, and share her experience. And I see in her story an updated version of what it must have been like for my own grandparents to come here from a foreign land, and try to make their way in the cauldron of America.

While her humor is often not "laugh out loud" it was "funny" in the sense of irony, observation of the misunderstandings that take place between people of different origins. And frankly, one of the best things about it was to remind me that people, underneath the cloaks of different names and accents, are actually the same. Laughter is a great reminder of that universal connection.

It reminds me of Amy Tan in the sense that her story, though factual, is one filled with cultural nuances that sometimes go unnoticed to the mainstream, but when revealed in the author's special way, they are humorous but not at all mean-spirited. It's a sweet story of the love of her family and the people she meets along the way... and growing up, just a little bit different than those around you. And I love her voices for her characters! Reminds me of my family some - though not Iranian, but Japanese.

A laugh on the subway

I listened to this hilarious book during my commute to work on the subway, and I caught myself nodding in agreement and laughing out loud almost every morning, only to realize that my sleepy fellow passengers were glaring at me for waking them up! Although I live halfway across the world in Austria, I have had a similar history. The book not only touched me but it also made me realize that life ain't so bad as a multi-cultural adult after all. I recommend this book to anyone who wants to know what it means to grow up as an immigrant, and to anyone who happens to be one!

Down to Earth and Far Out Too

This book was really entertaining and interesting. I was expecting either an "American Dream Come True" or "Shattered American Dream" account, but this was neither. It was actually a very down to earth account of a more than slightly strange situation.

The author's story meanders through normal situations like awful babysitting jobs to completely crazy situations like being stuck in the middle of an Anti-Shah demonstration in Washington D.C.. She's sincere as she details both the good and bad experieces she and her family experienced here.

I didn't think the reader had the right voice for this book - but she was clear and distinct. And if you're looking for an interesting book on life in America through an Immigrant's eyes that won't leave you completely despondant - this is a great choice.

Funny in Switzerland too

Funny wherever you're from or wherever you live. This story cuts across all cultures and makes you laugh from your heart. My entire family has enjoyed listening and more than once. Actually, we found that the voice of the author reading her book was very enjoyable and we look forward to more stories in the future.

I have to agree with the reviewers who wished for a bit more depth here. While many of the episodes were amusing, it was sometimes hard to believe that Americans could be as ignorant as depicted. Do we really believe that any two foreignors must speak the same language, or that the Sahara is in Iran? I don't think so--not even 30 years ago.

I did not find the author to be a good reader. She did indeed have that "kindergarten teacher" manner--plus an odd loop in her voice that started to drive me crazy.

I did enjoy the stories about her relationship with her father but would have liked to learn more about the Iranian culture and customs.

Finally, while I love books read by the author (guaranteed to pronounce the names correctly), Firoozeh Dumas too often sounds like she is reading to a group of kindergartners.

I hated for it to end

The lives of the author's Iranian immigrant parents and extended family along with her own adventures and misadventures provide more than enough material for each chapter. Lively narration keeps the stories moving along. Beyond the upbeat rendition of the author's personal history, there's a poignant subtext regarding the plight of her native country and what it was like to be an Iranian immigrant in the US in light of the infamous hostage crisis.

The book is interesting, but basically develops into a young girls recollections of her father and his foibles. Many of the anecdotes are not particularly relevant to the subject matter - a little shallow. The narration of the story by the author is fine.

An Interesting and Fun Look at Another Culture-

What made the experience of listening to Funny in Farsi the most enjoyable?

Firoozeh. She adapted her culture to the US with such aplomb.

What does Firoozeh Dumas bring to the story that you wouldn’t experience if you just read the book?

I loved her voice inflection and obvious enjoyment of her material.

I listened to this book because I have a son in law who is half Iranian. I was quickly caught up in Firoozeh's story and enjoyed her honest, frank, depiction of her family's trying (or not) to adapt to the USA. It was very enjoyable. I recommended it to my son in law's family. I think it is definitely a women's book.