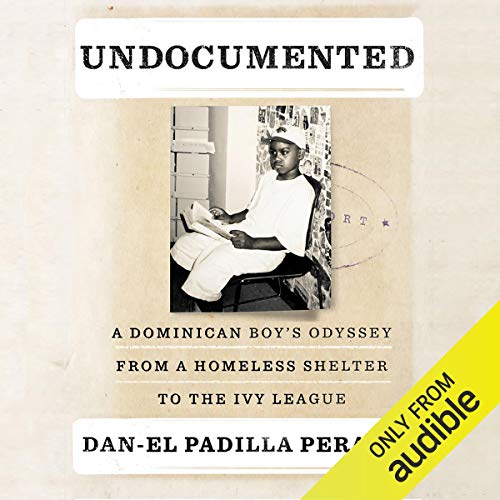 Dan-el Padilla Peralta has lived the American dream. As a boy, he came here legally with his family. Together they left Santo Domingo behind, but life in New York City was harder than they imagined. Their visas lapsed, and Dan-el's father returned home. But Dan-el's courageous mother was determined to make a better life for her bright sons. Without papers, she faced tremendous obstacles. While Dan-el was only in grade school, the family joined the ranks of the city's homeless. Dan-el, his mother, and brother lived in a downtown shelter, where Dan-el's only refuge was the meager library. There he met Jeff, a young volunteer from a wealthy family. Jeff was immediately struck by Dan-el's passion for books and learning. With Jeff's help, Dan-el was accepted, on scholarship, to Collegiate, the oldest private school in the country. There Dan-el thrived. Throughout his youth Dan-el navigated these two worlds: the rough streets of East Harlem, where he lived with his brother and his mother and tried to make friends, and the ultra-elite halls of a Manhattan private school, where he could immerse himself in a world of books and where he soon rose to the top of his class. From Collegiate Dan-el went to Princeton, where he thrived and where he made the momentous decision to come out as an undocumented student in a Wall Street Journal profile a few months before he gave the salutatorian's traditional address, in Latin, at his commencement. Undocumented is a classic story of the triumph of the human spirit. It also is the perfect cri de coeur for the debate on comprehensive immigration reform.

“Dan-el Padilla Peralta’s story is as compulsively readable as a novel.... From homeless shelter to Princeton, Oxford, and Stanford...he documents the America we should still aspire to be.” (Dr. Anne-Marie Slaughter, president of the New America Foundation)

What listeners say about Undocumented

A must read, but

I thoroughly enjoyed this book. The choice to include coarse language lessens the seriousness of its message.

TRUE GRIT OF THE JUST FOR SUCCESS!!

What makes America....America!!!
George Washington would be proud!! A true inspiration of overcoming!! The willingness to be patient for ones dream!!!

this genuine memoir kept my interest

The author writes and reads his story, from inner city homelessness to an Ivy League College. I had loved The Short of Tragic Life of Robert Peace, which prompted me to try this, too. This, Peralta's book, is so different. While Dan-el is a brilliant scholar, he is just a regular guy in so many ways. This is not a riveting book, but it is an authentic glimpse into another person's life, a life I was curious about. I teach some students like Dan-el, and felt this book would be valuable to me as a teacher. It was. The beginning of this book was a little slow, but picked up when Dan-el got to high school and college. He did need to deal with his race, and the fact that he had no legal papers. He had to deal with safety issues of living "in the hood." But he also had to deal with so many other normal issues of growing up - finding yourself and finding your comfort zone. Even had he not been an illegal, black immigrant, being a nerdy, intellectual boy is tough when you are growing up! The author is both ordinary and extraordinary, and to me, that was the appeal of this author's life story. I am glad I got to know him through his memoir.

I am not a fan of this book. The unnecessary language, the entitlement issues, the "Undocumented", on and on. I did finish it out of pure will power, however it was not worth the effort.

That being said, if you are interested in the story of a boy from the Bronx who makes it through ivy league schools and are pro undocumented foreigners taking advantage of our taxes, then be my quest, I am sure that you will thoroughly enjoy this book.

Too entitled, only got through chapter 3. Found his narration annoying as well. Too bad, because he clearly has an inspiring story to tell; I just couldn't deal with the "gimme" attitude of both him and his mother, documented or not.

This book was engaging and captivating. It made me root for Dan-el an his family throughout and even tear up a few times. What I liked the most was the way the author described his friends and family. In fact, I liked that part so much I thought there was not enough of it. It felt like the book was too concise and that it could have gone into more details about the relationships between Dan-el and the other characters.

The author's narration was excellent and gave an added dimension to the experience of listening to this book.

What was most disappointing about Dan-el Padilla Peralta’s story?

He used such bad language, I couldn't finish the book. Listening to the audiobook was like having someone sitting beside you swearing. I taught in several prisons and none of my students talked like that in my presence. If this boy was a cut above the usual immigrant, you certainly wouldn't know it by his language.

I hated it. I could not get over the vile language.

Great and engaging listen. Beyond the unnecessarily coarse language inconsistently used, it was a remarkable listen.
Perhaps Dan-el had intense motivations that led him to write this book and that I failed to catch, I believe that ending with a focus on his last minute love story and on immigration "laws" instead of sharing reflections on some crucial aspects of this story seems simply bizarre.
A salient note on a form of gratitude to positive "American" intentions or support, such as Jeff or the Clintons' efforts seems natural part of any grownup's attempt to write this life story.
There would be in this book, my opinion reads, more to be learned by an individual than by a state.
And Dan-el enamored, even more than his virtuous and tenacious mother, is probably not what the author wished we remember...
But undocumented was delivered from the heart and no listener can easily fail to grasp the skillful telling of a boy's inspiring life.

if you've always wondered how undocumented immigrants are able to live in the USA for years, this book is for you. Not surpringly, it's a tough life without a social security number. I enjoyed hearing the foibles and less than humble musings of this young man. This seems like a really honest book.

I liked the story, mostly the first two thirds, then I lost interest a bit.

Didn't care for the narration style.