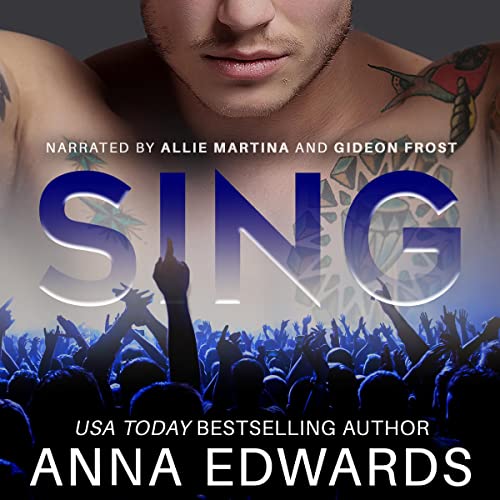 By: Anna Edwards
Narrated by: Allie Martina,Gideon Frost
Try for £0.00

Tate Gordon is the lead singer of Saving Tate, the hottest new rock band in Seattle. Having been mentored by music legends, Berrettini, for several years, the group are about to head out on their first world tour. Tate’s excited, but he’s struggling at the same time with the secrets he’s been keeping. His friends don’t know the truth about his youth or the confusion running through his head. Will Tate’s past destroy everything the group have been working for when his past returns in a chance encounter?

When Zoey ascends the steps of the tour bus, looking hot and carrying a clip board with a full itinerary, sparks instantly fly between her and Tate. Can these two keep it professional, or will their instant attraction lead to an explosive disaster no one could have foreseen?

What listeners say about Sing

This is the first book from Anna Edwards I’ve listened to in a while i listened to it as Allie Martina is a friend but from now on I will look for more of Anna’s books. Loved the story Tate and Zoey are perfect and the other guys are so funny. The narration was perfect Allie did such a good job and Gideon is fast becoming a favourite as well.

I loved the dual narration of Allie Martina and Gideon Frost, perfect for this book.

Lead singer Tate Gordon and newly appointed publicist Zoey Danson come from two totally different backgrounds but have more in common than they think. We are taken on a journey of two people dealing with a difficult past. It is their journey of self healing while falling in love.

So easy to fall for this one!

Tate's band is on the verge of greatness, and to keep them on track, a publicist is hired to babysit them. Yes, you heard that right, Zoey is going on tour with the band to keep them in line, doing something stupid and derailing their success. She is wary about going, not because she can't handle the job, but because her mom needs her. But the money will help, and the experience will be priceless. Tate doesn't want a babysitter, but there is something special about this girl. The other band members, Austin, Liam and Cameron have welcomed her in the fold, and while Tate is not happy about her coming, there is something about her that is special. And he feels a protectiveness when she is around. Each carries their own baggage, and it is enough to keep them both down. There is something in the air though and with the band's success, the support of the guys and each other, we can only hope they can find their happiness. Tate is an interesting character, not your typical front man, and his pain is real. Zoey is a tough one, supporting her mom despite the barriers that are constantly thrown up. Low angst, real emotion, humorous moments and a growing love keep this story flowing. Love my first experience with Anna Edwards and will watching for more.

Gideon Frost and Allie Martina tell us this story and they are fabulous. Frost voices Tate with the confidence of a rock star, and he adds his a warmth for Zoey and the pain when he is thinking of his past. Martina is fabulous as Zoey. Desperate of times, funny, loving and understanding all are emulated in her character. Loved this story and they way these two told it.

I am a huge fan of the “Rockstar” romance trope and love all kinds of rock stars, from the angsty, dark and dirty ones to the sweet and caring ones, and this book fits the bill by falling somewhere in between with some swoon worthy rock stars who have a lot of heart and personality. Anna Edwards is a gifted author with a wonderful writing style, I am not sure how and I am embarrassed to admit this, but this is my first book by her, but it definitely will not be my last, I am looking forward to checking out more of her work. The story she created is original, with interesting storylines that are captivating from start to end. Her characters are realistic, easy to relate to and connect with, they are easy to fall for and care about too. Tate Gordon, the lead singer of Saving Tate and with his bandmates and close friends, Liam, Austin and Cameron, are about to head out on their first world tour. Their record company thought it would be a great idea for them to have their own publicist go out on tour with them, maintain a positive image for the public and to keep them out of trouble. Zoey Danson is up and coming in the record industry and when offered the job to go on tour with the band, she knew it was a great opportunity, one that can make her career excel. Except Zoey has a lot of home issues and skeletons in her closet, her home life is not the best but she is also in need of the funds the new position would bring. She accepts the job and figures out a way to manage things on the home front while away. Hearing this new development did not exactly thrill the band, having to have her on their bus to babysit them and keep them in line. But when the band meets her, all but Tate is on board with her touring with them and staying on their bus. Tate does not hide his dislike for her, but she will let no one ruin this chance to prove herself and she gives back whatever he doles out. Tate recognizes something in her, something he knows deeply, darkness and hurt, he also feels a connection and is drawn to her. I loved how Zoey handled the band from the moment they first met and how she handled Tate too. She felt that intense attraction to him and when he warmed up to her, there was definitely music between them. He can see she is dealing with something, but he hides his own inner demons until he is ready to share. I loved how everything played out in the book, it is a beautifully plotted the story with plenty of drama, heartfelt emotions, a touch of angst, some fun times and some hot loving and romance. Anna Edwards, thank you for this great story and emotional rollercoaster ride.

🎧📚🎧 And for the amazing narration, Anna Edwards could not have chosen a better cast to bring her characters and story to life. Allie Martina and Gideon Frost are superbly talented narrators and versatile voice artists. They had a complete understanding of the characters they portrayed, gave each a voice that fit the character’s persona, were believable in every role they played and sounding just as I pictured the characters would sound. Allie Martina took Zoey’s role and ran with it and made it her own, she grasped her every emotion and had you feeling every single one. Gideon Frost did the same for Tate, both were great performing the roles of the secondary characters as well. These entertaining storytellers are a pleasure to listen to and their narration enhances an already great story to another level. Thank you for another amazing listen, you absolutely rocked it!!

I laughed, I cried, I cheered, I LOVED it!

Tate Gordon, rocker and lead singer of Saving Tate is hot, so hot, a bad boy, and dare I say, sex personified. The last thing he wants on his band’s first world tour is a babysitter. Zoey Danson, publicist, media expert and fixer extraordinaire is hired to be, you guessed Saving Tate’s tour, babysitter. This audiobook THIS story made me laugh, made me cry big, ugly, satisfying tears, made me cheer, and made me FEEL. Sing deals with what could be painful and uncomfortable subject matter. Through masterful writing and beautiful story telling, the subject is dealt with in a forthright and sensitive manner that does not diminish nor take away from the seriousness of the subject at hand. There are plenty of laughs and lighter moments along the way to act as a well needed buffer for the dark. If I had to sum up the story in three words it would have to be beautifully balanced brilliance. The characters are believable, unique, extremely likable, multidimensional, and extremely well developed. The narration is that every once in a while combination that makes you say THIS is a Narrator match made in heaven. Voicing perfection! Their performance is both beautiful and gut wrenching. Play this one at normal speed, close your eyes and feel the story, let it consume you as it did me. You won’t be sorry. The first thing I wanted to do when I finished this audio was to go back and experience the entire thing again, and that is exactly what I intend to do! Five gut wrenching, heart soaring, soul satisfying, fabulous stars!

Wish the whole series was on audio. Please use same people reading, they did a great job!

I have a strange feeling about this book . I love books about rockstars but this one sounds a bit untrue ... the narrators are okay in my opinion but I like male narrator more.

Fun, flirty well written story with some amazing characters. Its engaging without too much drama.

This is the first book in the Saving Tate series. This is a Rockstar/tour publicist trope. Both main characters suffered from trauma caused by addiction. This book also has a touch of Pretty Woman in it. I really loved this book. Can’t eat for the next book in the series. Allie Martina and Gideon Frost did an incredible job narrating this book.