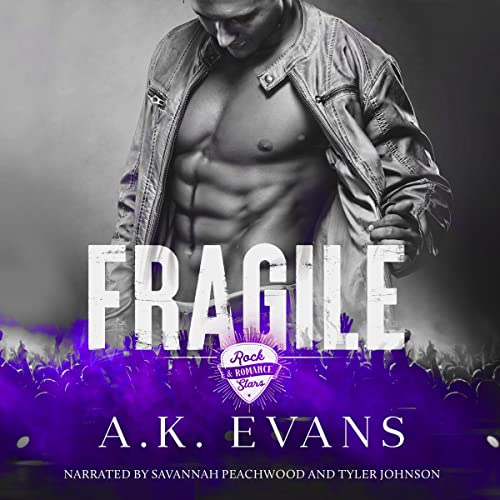 By: A.K. Evans
Narrated by: Savannah Peachwood,Tyler Johnson
Try for £0.00

As the lead singer of a wildly popular industrial rock band, Cash Morris has never had to work too hard when it comes to women. They’re all falling at his feet before he even opens his mouth.

So when he walks into a small-town New Hampshire hotel and spots the manager, he expects her to do the same. Only, she doesn’t, and that leaves him intrigued.

Demi Stokes has seen enough deception to last a lifetime and has written off the possibility of ever getting serious with someone for good.

Cash, the rock star with killer good looks, an incredible voice, and playboy ways is the very definition of what she intends to steer clear of.

But Cash is used to getting what he wants. And he’s never wanted something as badly as he wants Demi. If he’s ever going to have a chance with her, he’s going to have to prove that he has every intention of protecting her fragile heart.

In a nutshell: He's the playboy rock star she's determined to steer clear of. He is a man that's used to getting what he wants. It's a battle of wills in this enemies-to-lovers rock star romance. Packed with heat and humor, this kindle unlimited romance series is one you won't want to miss. Available in digital format, Fragile is your next Kindle Unlimited romance. Or, grab a paperback and dive into your new rockstar romance today."

What listeners say about Fragile

I hate to say this as I avoid leaving bad reviews, but given this app can be a bit expensive… I’m 11 chapters into the book and so far all it’s been is the heroine’s internal thoughts on how awful the hero must really be and for him to leave her alone. No action, no depth, no romance, just… the hero pining and the heroine saying no 10,000 different ways. Not for me - a slow burn is one thing. But there’s not any “burn” to speak of. It’s just dull. Gonna send it back if possible.

A couple meant to be!

Demi and Cash prove that true love prevails. A beautiful love story about learning to trust and believing in love. Cash proved that when a man knows what he wants and stops at nothing to get it, the battle is worth the reward

I loved this story when the H had to work for the h. Rock star romance done right. I enjoyed audio version and will definitely listen again. Excellent performance. Highly recommend!

Tyler Johnson just has one of those voices I could listen to all day. So slow and seductive-Damn!!!. Story was good, needed kleenex a few times 😥. The ending was soooo good❤❤❤❤❤