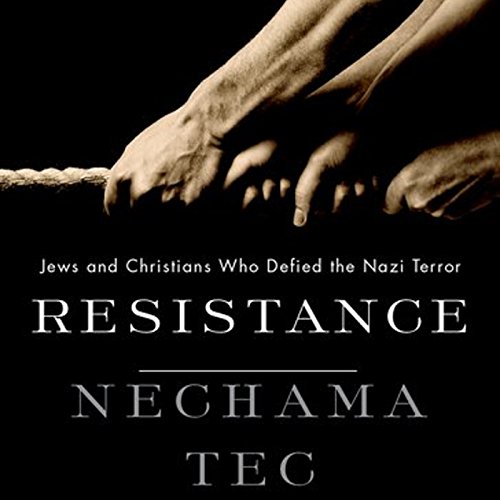 By: Nechama Tec
Narrated by: Robert Blumenfeld
Try for £0.00

Nechama Tec's Defiance, an account of a Jewish partisan unit that fought the Nazis in the Polish forests during World War II, was turned into a major feature film. Yet, despite the attention this film brought to the topic of Jewish resistance, Tec, who speaks widely about the Holocaust and the experience of Jews in wartime Poland, still ran into the same question again and again: Why didn't Jews fight back? To Tec, this question suggested that Jews were somehow complicit in their own extermination. Despite works by Tec and others, the stereotype of Jewish passivity in the Holocaust persists.

In Resistance, Tec draws on first hand accounts, interviews, and other sources to reveal the full range of tactics employed to resist the Nazi regime in Poland. She compares Jewish and non-Jewish groups, showing that they faced vastly different conditions. The Jewish resistance had its own particular aims, especially the recovery of dignity and the salvation of lives. Tec explores the conditions necessary for resistance, including favorable topography, a supply of arms, and effective leadership, and dedicates the majority of the book to the stories of those who stood up and fought back in any way that they could.

Emphasizing the centrality of cooperation to the Jewish and Polish resistance movements of World War II, Tec argues that resistance is more than not submitting - that it requires taking action, and demands cooperation with others. Whereas resilience is individual in orientation, Tec writes, resistance assumes others. Within this context, Tec explores life in the ghettoes, the organizations that arose within them, and the famous uprising in Warsaw that began on January 18, 1943. She tells of those who escaped to hide and fight as partisans in the forests, and considers the crucial role played by women who acted as couriers, carrying messages and supplies between the ghetto and the outside world.

Tec also discusses resistance in concentration camps, vividly recounting the Auschwitz-Birkenau camp uprising on October 7, 1944. The refusal of the rebel leaders to give information under unspeakable torture, Tec displays, was just one more of the many forms resistance took. Resistance is a rich book that forever shatters the myth of Jewish passivity in the face of annihilation.

What listeners say about Resistance