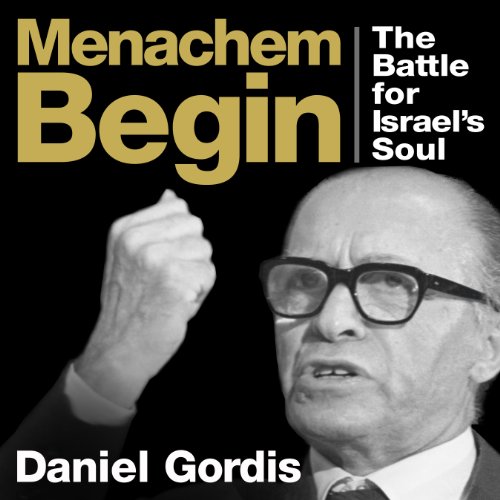 By: Daniel Gordis
Narrated by: Walter Dixon
Try for £0.00

Reviled as a fascist by his great rival Ben-Gurion, venerated by Israel’s underclass, the first Israeli to win the Nobel Peace Prize, a proud Jew but not a conventionally religious one, Menachem Begin was both complex and controversial. Born in Poland in 1913, Begin was a youthful admirer of the Revisionist Zionist Ze’ev Jabotinsky and soon became a leader within Jabotinsky’s Betar movement. A powerful orator and mesmerizing public figure, Begin was imprisoned by the Soviets in 1940, joined the Free Polish Army in 1942, and arrived in Palestine as a Polish soldier shortly thereafter. Joining the underground paramilitary Irgun in 1943, he achieved instant notoriety for the organization’s bombings of British military installations and other violent acts.

Intentionally left out of the new Israeli government, Begin’s right-leaning Herut political party became a fixture of the opposition to the Labor-dominated governments of Ben-Gurion and his successors, until the surprising parliamentary victory of his political coalition in 1977 made him prime minister. Welcoming Egyptian president Anwar Sadat to Israel and cosigning a peace treaty with him on the White House lawn in 1979, Begin accomplished what his predecessors could not. His outreach to Ethiopian Jews and Vietnamese "boat people" was universally admired, and his decision to bomb Iraq’s nuclear reactor in 1981 is now regarded as an act of courageous foresight. But the disastrous invasion of Lebanon to end the PLO’s shelling of Israel’s northern cities, combined with his declining health and the death of his wife, led Begin to resign in 1983. He spent the next nine years in virtual seclusion, until his death in 1992. Begin was buried not alongside Israel’s prime ministers, but alongside the Irgun comrades who died in the struggle to create the Jewish national home to which he had devoted his life.

Daniel Gordis’ perceptive biography gives us new insight into a remarkable political figure whose influence continues to be felt both within Israel and throughout the world.

"The story of Menachem Begin is an inspiring story of Israel, and his legacy is one that lives with us still. Daniel Gordis expertly recreates that epic and passionately passes that tradition on to his listeners. Anyone wishing to understand Israel - its past as well as it current affairs - must turn to Gordis’ Begin." (Michael Oren, author of Six Days of War)

What listeners say about Menachem Begin

What made the experience of listening to Menachem Begin the most enjoyable?

The orator could have taken the time to better prepare himself to correctly pronounce a variety of mispronounced words in Hebrew and Yiddish, it was distracting listening to him slaughter these words.

Would have much rathered that the narrator would pronounce the Hebrew and Yiddish words properly, but Uther than that- excellent book. very detailed and eye opening. greatly recommended.

I learned lots of interesting details about a story I already thought I knew well.
The reader takes it much too fast (but not so fast that slowing it down is much help. Worse, he has taken no trouble to learn Hebrew pronunciation. His constant mistakes are annoying and make this otherwise enjoyable book a harder listen.

The story is truly inspiring especially for Jews. It is a shame that the chosen reader is limited in his ability to properly pronounce Hebrew or Yiddish

Where does Menachem Begin rank among all the audiobooks you’ve listened to so far?

The book's great. Daniel Gordis' writing is, as ever, captivating and illuminating. But I'm returning this audiobook and moving to an eBook to read the rest of the book. I simply can't take any more of the narrator.

Sadly he's unfamiliar with the Hebrew names and words that pepper the book.

The early chapters make frequent references to Menachem Begin's father Ze'ev. The narrator calls him "zay ev" (pronounced as if the first half of the name rhymes with the greeting "Hi").

That was grating enough but the final straw was when, in chapter 4 (at around the 11min mark), he refers to the "Hativka". It should be the "Hatikva". At that point I realised I was more focused on waiting for the next foul-up by the narrator than by the content of the book.

Last fall (2014) I re-read Lawrence Wright’s book “Thirteen Days in September: Carter, Begin and Sadat at Camp David” I thought this might be a good book to provide more information about Begin.

Begin had run for prime minister eight times when in 1977 he won on his ninth try. Apparently Begin was extreme right wing, he helped formed the Herut party. Begin was despised by the ruling establishment. Begin’s Herut party platform called for Jews to rule in all of Palestine. The Egyptian and Syrian attack in 1973 set up the change to help Begin win in 1977.

Gordis in his biography of Begin starts with his childhood and adolescence in a Polish Shtetl. Begin was an active Zionist. Begin graduated from University as an attorney. Gordis tells about Begin and his wife Aliza flight from Poland in 1939 to escape the Nazis, only to be imprisoned in Siberia by the Russians. They finally arrived in Palestine in 1942.
The author tells of Begin’s life in the Irgun, the underground fighting force in Palestine, following their arrival in 1942. Begin lost his family in the Holocaust and that had a major influence on his belief in a homeland for the Jews.

Gordis covers in depth Begin’s life as prime minister; he covers Begin’s liberalization policies that hastened the end of Israel’s semi-socialist economy. In 1981 Begin bombed Saddam Hussein’s nuclear reactor to prevent them from making a nuclear bomb. Begin welcomed Ethiopian Jews to Israel. The author discusses the peace treaty with Egypt and the 1982 war in Lebanon. Begin won the 1978 Nobel Peace Prize for the peace with Egypt.

According to Gordis, Begin’s most important legacy is the restoration to Israeli’s public life of a fundamental sense of Jewish purpose that was missing from it during the long years of Labor hegemony. The author says Begin was a person whose Jewish soul dictated virtually everything he says; every action he took. Gordis states that Begin remains the, most Jewish prime minister that Israel has ever had. Walter Dixon narrated the book.

I was never a Begin fan, but this book shows you what an interesting, insightful, passionate character Begin was. I recommend this book. If you want to learn more about Begin, also check out Yehuda Avner's "The Primer Ministers."

Having grown up in a home where my father (of blessed memory ) was a staunch supporter of Menachem Begin, this book filled in many of the blanks that as a child I didn't know to ask about.

This speaker has no respect or hint of what and who he’s talking about. Like painting by numbers undistinguished flower from a donkey. Words read without respect for or effort made to learn to pronounce to the ethnicity of this story. This story narrated by an incompetent. worse than wearing 4 condoms simultaneously.
Ask him now to sing “It’s a rainy night in Georgia” by Ray Charles.
I want my money back !!!

Author Daniel Gordis masterfully weaves the life, Herculean feats, and faults of Menachem Begin, thus giving him the recognition he deserves as one of Israel’s founding fathers, and Moses-like savior of his People!