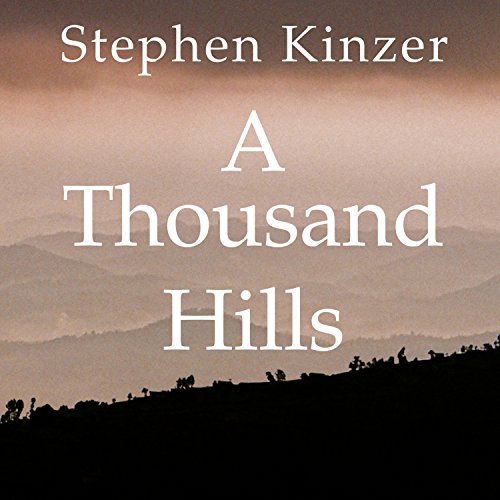 By: Stephen Kinzer
Narrated by: Paul Boehmer
Try for £0.00

Paul Kagame grew up as a wretched refugee. He and a group of comrades, determined to force their way back home after a generation of exile, designed one of the most audacious covert operations in the history of clandestine war. Then, after taking power, they amazed the world by stabilizing and reviving their devastated country.

Now, as President Kagame, he's obsessed with a single outlandish dream: to make Rwanda the first middle-income country in Africa, and to do it in the space of a single generation.

A Thousand Hills tells Kagame's tumultuous life story, including his early fascination with Che Guevara and James Bond, his years as an intelligence agent, his training in Cuba and the United States, the dazzlingly original way he built his secret rebel army, his bloody rebellion, and his outsized ambitions for Rwanda. It is the adventure-filled tale of a visionary who won a war, stopped a genocide, and then set out to turn his country into the star of Africa. Like Ishmael Beah's best-selling A Long Way Gone and Greg Mortenson's Three Cups of Tea, this book recounts the thrilling and uplifting tale of a man who defied the odds to lift himself and his country out of misery toward a more promising future.

"A fascinating account of the near-miracle unfolding before our very eyes.... A very good read." (Archbishop Desmond Tutu)

What listeners say about A Thousand Hills

Insightful story, very different from the story most know. The author tries to balance but still comes out pro Kagame .

How to reconcile a failed state?

must read for everyone on the planet. even though it may be a bit biased towards kagame

Best Most Comprehensive Work on Rwanda

I prepared for a trip to Rwanda for the govt by reading anything I could get my hands on. This book did the best job I in describing the history and current situation in Rwanda. It does an adequate job describing the 1994 genocide and about one-fifth is on this topic. If this is your interest look at other books.

The author interviewed current President Kagame and seems to be slanted in support of the man. Yet, as I sit in Kigali in preparations for the 2010 election, it is clear Kagame has had a dramitic impact on Rwanda since the 1980s. It is not clear whether the man is more Hitler or Mandela but he seems to be the best shot of a successful leader in Africa. The author is honest about some of the critisism leveled against Kagame for heavy-handedness and gives him a pass due to the tensions still remaining in the country. I was impressed when the author described a "genocide advantage" in how Kagame and the PDR party shoud be allow latitude because of the need to rid the country of the Tutsi/Hutu division.

I could not recommend this book more. It is well written and well narrorated.

It was riveting! I had not heard that perspective and it was an eye opener for me! Kagame’s achievements are astounding and sets an amazing role model for other countries. I really appreciated how transparent he was about his decisions.

I am deeply sorry for the way the rest of the world neglected the Tutsi at that time. I wish we had been told the truth!

A beautifully written book about our world’s greatest leader.

Kinzer does a great job of telling the story of Paul Kagame and the job he has done of helping to save Rwanda during the genocide and how he has helped to heal and preserve it afterward. I am from America. My wife is Tutsi and from Rwanda. After meeting and getting to know my wife years ago I wanted to learn as much as I possibly could about her country and her heritage. In doing so I had to learn about President Kagame. I believe him to be the greatest leader in our world right now. More than a hero. And this book contains so much of his story and Rwanda’s story. I highly recommend it to anyone interested.

Very monotone reading. The French words were not well read.

The story is very compelling. The reading is good overall.

It completely explains who are all the players in the genocide. What led to the genocide and possible motivations behind government officials that committed the atrocities. As well as who's leading government now and what's their motivation currently.

Rwanda - forging it's own path

expertly red, this book provides what I think is a balanced insight into the hell of Rwanda in the early 1990s, the colonial forces that set the nation on its path to self destruction and, the eventual path to independent liberation that is uniquely Rwandan.

the narrator was pretty good, but some of the lines were cringey. more importantly it sounded like a cheap podcast recorded in someones living room. still the history is something i didnt know and something I loved learning about

Very well written book. Diving into the historical aspect painted a complete picture that deepens ones understanding of Rwanda beyond the genocide.

A good intro to Rwanda

I appreciated the all-encompassing nature of the book. It covered most of the 20th century history of the country, the personal history of Paul Kagame, the genocide, and finally a lengthy look at where Rwanda is now, and where they hope to be in the future. It seemed both nuanced and balanced. Thank you!

Amazing story or an amazing man

Great book and easy to listen too. Engaging story. The author could have arranged to have the last chapter more positive.