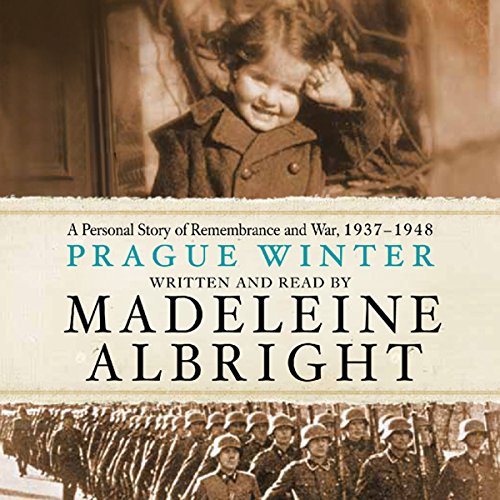 Before Madeleine Albright turned twelve, her life was shaken by the Nazi invasion of Czechoslovakia - the country where she was born - the Battle of Britain, the near total destruction of European Jewry, the Allied victory in World War II, the rise of communism, and the onset of the Cold War.

Albright's experiences, and those of her family, provide a lens through which to view the most tumultuous dozen years in modern history. Drawing on her memory, her parents' written reflections, interviews with contemporaries, and newly available documents, Albright recounts a tale that is by turns harrowing and inspiring. Prague Winter is an exploration of the past with timeless dilemmas in mind and, simultaneously, a journey with universal lessons that is intensely personal.

The book takes readers from the Bohemian capital's thousand-year-old castle to the bomb shelters of London, from the desolate prison ghetto of TerezÍn to the highest councils of European and American government. Albright reflects on her discovery of her family's Jewish heritage many decades after the war, on her Czech homeland's tangled history, and on the stark moral choices faced by her parents and their generation. Often relying on eyewitness descriptions, she tells the story of how millions of ordinary citizens were ripped from familiar surroundings and forced into new roles as exiled leaders and freedom fighters, resistance organizers and collaborators, victims and killers. These events of enormous complexity are nevertheless shaped by concepts familiar to any growing child: fear, trust, adaptation, the search for identity, the pressure to conform, the quest for independence, and the difference between right and wrong.

"No one who lived through the years of 1937 to 1948," Albright writes, "was a stranger to profound sadness. Millions of innocents did not survive, and their deaths must never be forgotten. Today we lack the power to reclaim lost lives, but we have a duty to learn all that we can about what happened and why." At once a deeply personal memoir and an incisive work of history, Prague Winter serves as a guide to the future through the lessons of the past - as seen through the eyes of one of the international community's most respected and fascinating figures.

“A remarkable story of adventure and passion, tragedy and courage set against the backdrop of occupied Czechoslovakia and World War II. Albright provides fresh insights into the events that shaped her career and challenges us to think deeply about the moral dilemmas that arise in our own lives.” (Vaclav Havel)
“I was totally blown away by this book. It is a breathtaking combination of the historical and the personal. Albright confronts the brutal realities of the Holocaust and the conflicted moral choices it led to. An unforgettable tale of fascism and communism, courage and realism, families and heartache and love. (Walter Isaacson)
“A genuinely admirable book. Albright skillfully returns us to some of the darkest years of modern times. Spring eventually came to Prague, but in much of the world it is still winter. The love of democracy fills every one of these instructive and stirring pages.” (Leon Wieseltier)

What listeners say about Prague Winter

Where does Prague Winter rank among all the audiobooks you’ve listened to so far?

In the top five

Fascinating time in history both Czech history and the worlds.

Have you listened to any of Madeleine Albright’s other performances? How does this one compare?

The transportation of her young cousin to Auschwitz.

Very hard to turn this off. There is more history than personal reminiscence but the two are tied in.

I lost myself in this world

lovely well written personal and factual history of Checkoslovakia during and after 2nd world war, great to hear it read by author.