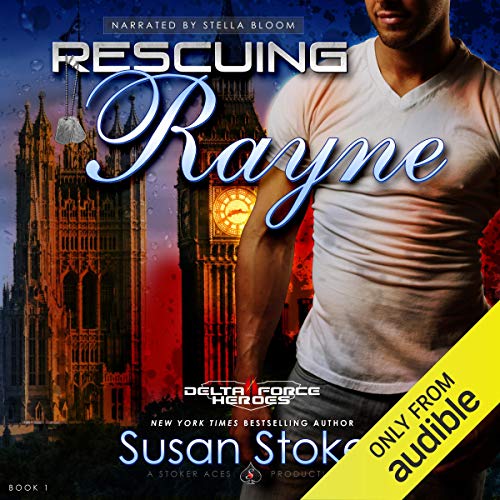 By: Susan Stoker
Narrated by: Stella Bloom
Try for £0.00

As a flight attendant, Rayne Jackson is used to cancellations, but she never dreamed her latest would lead to a whirlwind tour of London with a handsome stranger...or a life-altering night in his bed. One evening is all the enigmatic man can give her, and Rayne greedily takes it, despite suspecting it will never be enough.

Heading home after another extreme mission, Keane "Ghost" Bryson hadn't planned to seduce someone during his layover, but Rayne is too sweet to resist. Being a Delta Force member means lying to protect his identity, which is unfortunate, considering Rayne seems made for Ghost, right down to the tattoo on her back. For the first time in his life, regret fills him as he slips away the following morning.

Both are shocked when, months later, they meet again - under the worst possible circumstances. Seems fate has given them a second chance...if they can survive the terrorist situation they're in. If Rayne can forgive Ghost his lies. And if Ghost can trust Rayne to be strong enough to endure the secrets and uncertainty that come with loving a Delta Force soldier.

What listeners say about Rescuing Rayne

An exciting well written storyline, a beautiful live story with thrilling twists and turns . I look forward to the other stories in this intense series!

A beautiful love story, lots of twists but the good guy wins at the end Plenty of edge of seat action. Susan Stoker is an excellent author and I cannot wait for the next book in this series,

I enjoyed every minute of it. Steamy hot and well written. Not everyone get to explore their fantasies. It's amazing what you can find out about yourself when you have the right person to explore the experience with.

It's the first I have read so far from Susan Stoker and I loved it couldn't put it down until I finish it well done.

when is the next 1 out!!?? i loved the seals serise and i loved this book too. you feel the love with these books.

GREAT START TO A NEW SERIES

I loved this story. IT was full of romance, hot sex, action, suspense. The pace of the book, which is very important to me, moved steadily. Not a lot of internal dialogue and angst, which is also important to me because I'll get bored.

Susan does a great job of giving the sense of family with Delta Team which got me invested in the characters early on.

Stella Bloom gave a great performance. Her male voices were believable. Distinct male and female voices you know who is speaking without guessing.

I'm looking forward to next book which I think is going to be Fletch.

Absolutely worth a credit but I bought it on sale for under $10. I will use a credit for next book.

If you can get through the beginning...

The beginning of the story is kind of lame. Once I read past the airport scene then things got better. The day spent in London was very romantic and the hero was tough and more realistic than some heroes. Rayne was a great heroine too - she wasn't a bubble head and she used her brain. I like these series featuring the special ops forces.

A winner with the whole package!

A great, well thought out story with great characters. Don't miss this one. I've enjoyed all these books but this is her best.

sorry to say this one just didn't work for me

It was just missing something. I usually love this author however, this was a miss for me. Not bad just meh.

Much suspense and romance!

I continue to enjoy all the books by this author. One cannot help but be quickly absorbed in the story and rich characters. There was action, suspense, romance and wonderful characters that instantly grab your attention and desire to follow them. I couldn't stop listening.

Series! Pick this up!

I'm so glad I discovered this series when it already has multiple books in it! I know the next title will be in my library soon! A love story with a rescue thrown in... yes girl rescued by military man but at the same time she is a Strong female. She isn't a weak female just waiting to be rescued - she is doing her best to save herself!

I'm lovin the start of this series!!

Susan's books just keep getting better!!
I didn't think that was possible.
The suspense in this book is from the first page to the last!!

Lots of action starting from the beginning. Can't wait till the next installment. The narrator was very good also.

I don't know about this book, left me lacking. The story line held promise, but I found the female lead bland and one dimensional. I struggled through the first half and only started enjoying the book at the end. Maybe the character development was a bit slow, but I did not feel I could relate to the characters.

Stella Bloom does a great job narrating the story. She takes each character and brings them to life. I had read the book before and enjoyed it but with Ms. Bloom narrating, I didn't want to stop when it was time to go to bed. One more chapter. The story involves the leader of the Delta Force team and a flight attendant. They agreed to a one night stand but they really regretted the separation. Then when she is in Egypt, terrorist take over a building that she is in. The Delta Force is called in to save the day. They meet again. It is a love story with a happy ending.