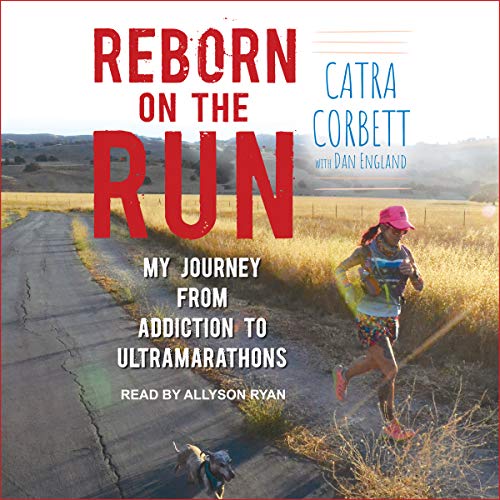 Reborn on the Run

By: Catra Corbett,Dan England
Narrated by: Allyson Ryan
Try for £0.00

Aside from her rock star looks, Catra Corbett is a standout in the running world on her accomplishments alone. Catra is the first American woman to run over 100 miles or more on more than 100 occasions and the first to run 100 and 200 miles in the Ohlone Wilderness, and she holds the fastest known double time for the 425-miles long John Muir Trail, completing it in 12 days, four hours, and 57 minutes.

After two years of addiction, Catra is busted while selling, and a night in jail is enough to set her straight. She gives up drugs and moves back home with her mother, abandoning her friends, her boyfriend, and the lifestyle that she came to depend on. Her only clean friend pushes her to train for a 10K with him, and surprisingly, she likes it and decides to run her first marathon after that.

In Reborn on the Run, the listener keeps pace with Catra as she runs through difficult terrain and extreme weather, is stalked by animals in the wilderness, and nearly dies on a training run but continues on, smashing running records and becoming one of the world's best ultrarunners.

What listeners say about Reborn on the Run

I’m a big guy looking for inspiration to get back into running. This book has been really valuable to me. It’s really well written, well read and just the perfect partner as you “zip up and set off”.

Thanks for taking the time to put this together.........keep running Cat!

she tells her story so well. I am constantly reminded of how strong our mind is when we really decide to do something. worth the listen!

Great audio book. I’ve read most of the running books out there and Catra’s name has cropped up before so I was intrigued. Overall I thoroughly enjoyed it and I would say it is in my top 5.

Started well, but tailed off.

The first 40-50% of the book is quite good. But I couldn't help find the second half, particularly the latter stages, a bit repetitive and, if I'm being honest, a bit egotistical.

I ended up thinking - "ok we get it, you're a bad-ass who runs 100 milers" and found it a quite boring in the end.

Narrator not great either. A bit disappointed all in all. Gave it 3 stars because of the first half, which I quite liked.

Allyson Ryan should never be the narrator for this

could not get into the story for the terrible performance of the narrator, spoiled the story as well as my long runs.

Worth a listen, good story from drug addiction to ultra marathons. Some will find inspiration from this.

I enjoyed the book, and I found most of the story to be very inspiring. I was also concerned though that the author wasn’t being honest with herself about the physical torment and negative impact on her mental health at times. Some of the content is tough to listen to, but what the author has achieved is remarkable and shows what is humanly possible if pushed to extremes.

While I enjoyed the story and 'running talk', I found the first half very slow moving. I persisted anyway and enjoyed the second half more. I identify with some of the struggles the author faced but am not really sure that the book would be helpful for those currently struggling with addiction or eating disorders - my overall impression was that the deeper issues of the writer had never been successfully addressed, which is rather sad. As an ultra runner myself I found the insistence that running was not an addiction for her a good challenge for myself as well as the question, where do you draw the line between endurance and self- abuse?

Loved this book finished it in two days. Inspired me to lace up my running shoes !

0 insights into running...I hate the word "bad ass" now.. same thing over and over again. found myself getting mad listening to it. married a guy after a few weeks and then seems surprised that it was a stupid thing to do. F n sillyness the whole thing.

I really wanted to like this book. As a seasoned ultra runner, I love hearing other people's stories and what brought them to the sport. The structure of this book was poor throughout. There wasn't a cohesive and flowing storyline and I felt like the author constantly jumped back and forth between different times of her life, which left me a little confused at times. There was a lot of redundancy throughout the book as well. She repeated the same phrases often and would sometimes reword the same points. She has a great story to tell, but I just couldn't get into it because of how poorly it was written.

I am not going to lie, I listened 3 times

This is probably the most interesting poorly written book I have ever listened to. Catra's story was VERY interesting. The writing wasn't the best, it was very repetitive at times and the constant references to epic, hardcore and awesome were too much. BUT underneath all that, the story is VERY good.

This book is the usual fare for runners' books these days: addict finds escape from life's struggles in ultra-running. But this one utterly failed to bring me into the experience. At no point did I ever feel the pain or struggle of the author's achievements, as she dismissed her first 50 and 100 mile races with a paragraph or two. Events depicted in the book, while ordinary, might have been harrowing, riveting, or terrifying, but the reader is never made to feel the emotions of those moments.

It truly feels like this book had no editor. Not only for the reasons already mentioned, but because it often repeats itself, sometimes in contradictory ways. And, not being a dog-person maybe I just do not understand, but what editor would allow an entire chapter recounting a history of the dogs the author has owned, how she came to own them, and how they died into the book? I'm not making that up. An entire chapter of "that's when I met fluffy, Fluffy and I loved to run together. He appreciated the majesty of the trail and we ran together a lot." What the crap?! How did that get past the editor, or the beta-readers?

Also the narrator is not great. She vacillates between only two voices: one a sleepy voice that sounds like she is almost slurring her words, making her sound like she is half in the bag, and the other, a giddy-sounding voice like a child who is so excited about the punchline of a joke that they cannot keep their voice calm enough to tell the setup. Too bad the book is not funny.

In conclusion, I think this book would only be of interest to someone who has some particular interest in the author herself, because as just a common listener who enjoys running books, I found it very difficult to get through.

It has begun to destress me, to some degree, that some of the running books I am spending credits to listen to (3 out of the last 5 I have downloaded) contain language that is my personal desire to avoid, be it in audio or print. I consider myself sufficiently intelligent enough to comprehend the information or ideas someone is attempting to communicate without inclusion of the “S” word and/or the “F” word. Anyone reading this can make their own choices as it relates to themselves. For myself, I would like to see Audible include a language notice in the description section of books when the works contains language such as is referenced above.

This is now the third title I have ceased listening to and returned. What a disappointment! I believe the author’s experiences related to running would have been completely fascinating.

Still worth the listen, despite...

The story was great, but the narrator delivered it poorly, and the writing and organization of the story was terrible. That said, still worth the listen, but be patient while you give this audiobook a chance.

Catra has an amazing story. Since I knew of her in the ultra community and saw her at races I was curious to know her story. She’s very inspiring however the way the book was written became very redundant and found myself just trying to get to the end just to get it over with. Thanks for sharing Catra

Book was great; however, the narrator needed a little more energy. Sometimes I could tell what character she was trying to be.

I greatly enjoyed this book!

Her journey is inspiring! I’ve been running now for 2 years and I’m 38! To here all her challenges and achievements even at 50 encourages me to never let my age factor any run decisions I make! From one survivor to another! Thank you Catra for sharing your amazing story! Run on runner!

Pay close attention to who is speaking. When it switches from Catra to Dan I was lost for a few minutes. Great story.

I couldn't break away from listening to this book!! I couldn't wait to find out what Catra's next epic adventure was going to be!! I love how she was so open and raw with some of the most painful parts of her life.