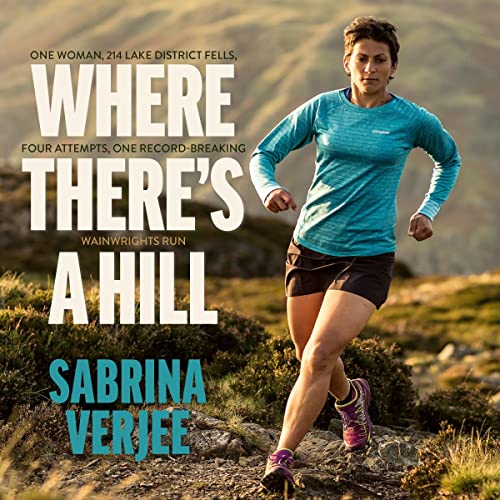 Where There's a Hill

By: Sabrina Verjee
Narrated by: Liz Jadav
Try for £0.00

Sabrina Verjee is an ultrarunning phenomenon. In June 2021, on her fourth attempt, she became the first person to climb the Lake District’s 214 Wainwright hills in under six days, running 325 miles with a colossal 36,000 meters of ascent.

Where There’s a Hill tells the story of an outsider who was never picked for a school sports team yet went on to become an accomplished modern pentathlete and adventure racer. After switching her focus to ultrarunning in her 30s, Sabrina moved to the Lake District, where she could hone her mountain-running skills on the local fells. High-profile success in endurance events followed, as she completed the Dragon’s Back Race three times and was the outright winner of the 2019 Summer Spine Race, beating her nearest competitor by more than eight hours.

However, it was the Wainwrights Round that really captured Sabrina’s imagination. Having learnt about the challenge from fell-running legend Steve Birkinshaw, Sabrina began to plan an attempt of her own. Despite multiple obstacles—including lockdown regulations, bad weather, injury, and controversy—Sabrina’s grit and determination shone through. Where There’s a Hill is a frank and inspirational account of how one woman ran her way into the record books.

What listeners say about Where There's a Hill

A great insight into character

A great listen for people who like to run off road into what's required to achieve apparently superhuman feats.

There are three parts to Sabrina Verjee's audio book that make it perhaps the best running book I have listened too. Firstly Sabrina's love of running, being outside and the sheer joy of being alive comes shining through, in a really positive and relatable way. It isn't a 'look how fast I can run, aren't I great' dialogue, it is more a happiness can be found outside kind of thing. The second thing is Sabrina relates her story and its successes to every day achievements and even her fails, she points out that records are always 'your' record and will stay with you forever for what they are. They can't be beaten, taken away or diminished. Then of course there is her story central to these themes, and while she refers to herself as The Queen of the Wainwrights she isn't slow to also point out that she is also often called one tenacious little f@*ker. Great listen. Highly recommended.

Not Feet in the Clouds

A must read for fell runners, Lake District lovers and Wainwright baggers

I’ve always been intrigued about Sabrina Verjee, probably because she doesn’t splash her life all over social media like other running superstars. I couldn’t wait to read this book when it came out and wasn’t disappointed. Sabrina had such an interesting upbringing which makes her achievements in fell running all the more remarkable. I also love the fact she’s a normal person who holds down a demanding job and a relationship etc. A very inspiring read, highly recommended especially for fell runners, Lake District lovers and Wainwright baggers.

Really enjoyed Sabrina’s book, a great listen on long runs and car journeys, need to find another one as good now 👍🏻

I really enjoyed this book and the way it allowed Sabrina’s words to shine - even though it wasn’t narrated by her. As an aspiring ultra runner myself I found her descriptions of the techniques she uses to get through dark times, the importance of saving precious minutes by not faffing during long races, and frank discussions around the physiology and psychology of ultra running fascinating and really helpful. It was interesting to learn about Sab’s upbringing and how so many different factors contributed to her incredible ability to run big distances, problem solve, navigate, and manage both herself and others along the way. A great listen and thoroughly recommended, especially if you’re planning your own epic!

I’ve known Sabrina for several years from her early days in Adventure Racing. She’s a tenacious one! She’s gone on to achieve many great feats in mountain ultras. The bit I enjoyed the most was in fact the early chapters about her family, upbringing and schooling which I knew nothing about.

This book is wonderful!

I absolutely loved this book! I finished listening to it in less than 24 hours. I am a hill running (we say hill running not fell running in Scotland) so this is my world and what a treat. This book isn't just about completing a round and breaking a record, it's also about tenacity, perserverance, planning and digging deep to achieve your goal. I would highly recommend this book, it's well written, informative and enjoyable. I know I will listen to this book again and again.

This is a great story even if you’re not a runner. It’s very motivating. I didn’t know what a Wainwright was.

I’d listened to a podcast with Sabrina ‘It’s not a record’ so was really looking forward to this book and was not disappointed. What an inspiring strong lady. It’s good to hear from someone experienced how races don’t always go to planned and that they too are in agony after. Really enjoyed the book and am inspired to try bigger challenges.