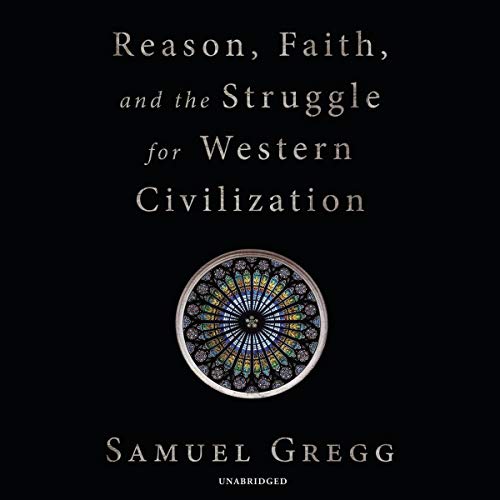 Reason, Faith, and the Struggle for Western Civilization

By: Samuel Gregg
Narrated by: John McLain
Try for £0.00

Western civilization's genius is in its synthesis of reason and faith. These foundations are under assault today from Islamists and radical secularists. Unless Western society recovers its confidence in this synthesis and its capacity to magnify human freedom and achievement, our future is limited.

This sharp commentary on the rise and current decline of Western Civilization touches on historical moments - including the building of early universities in the Middle Ages and the American Revolution - and figures - including Augustine, Acquinas, Edmund Burke, and Adam Smith - that exemplify the faith-reason synthesis at the heart of Western Civilization, as well as the modern villains that threaten to destroy it.

What listeners say about Reason, Faith, and the Struggle for Western Civilization

Excellent description of the current state of the West

Sam Gregg has once again brought his clear thinking and insights about Western Culture to us through this book. Here he gives a concise history of the relationship between faith and reason and how Western Civilization depends upon their consistency. He uses Pope Benedict XVI’s 2006 Regensburg Address as the starting point for the discussion. From there he shows the Jewish Roots of the positive relationship of faith and reason and how Jewish faith gave meaning to and enhanced Greek philosophy.

Gregg always shows the history of movements that tried to place opposition between the two, favoring one over the other. These movements have had bad consequences, sometimes frighteningly so.

He concludes with words of hope, explaining how the West can rescue itself by once again embracing the compatibility of faith and reason. He shows how the American Founding differed from the French Revolution in this regard, and how to move back in that direction.

In this era of irrationality, in which scandalous and hysteric cries to “defund the police” - as opposed to defund the universities, a policy which would make much more sense (The Spectator) if peace and sobriety is what we want in our cities - the scholarly presentation we are given is refreshingly insightful. The argument is a (very) solid one and, at stake, nothing less then the Western Civilization. Read, listen... and pass it to others capable to discern, open to rational arguments and the experience of history.

How the Wheels Came Off the Bus

Among those of us worried about the future of our culture, identifying the exact moment when the wheels came off the civilizational bus is a perennial parlor game. The hedonistic nihilism of the 1960s is an obvious choice. Then there’s the Enlightenment’s deification of science. Or William of Occam’s denial of the concept of universals. Whatever moment one chooses, it’s possible to take another step farther back. In other words, rather than asking “when” we should ask “how”; instead of pinpointing a moment we need to understand a process. For that, Samuel Gregg has supplied an invaluable guide.

True, identifying the divorce of faith and reason as the central driver of that process doesn’t make him original. But his account of the centrality of faith and reason to Western civilization—and the thinkers who have labored to defend or destroy their connection—is admirably lucid. So far from antagonistic, faith and reason are mutually sustaining. Faith prevents the work of human reason – science, philosophy, politics—from descending to the guillotine and the gulag. Reason rescues faith from becoming nothing more substantive than personal emotional experience, opening it to charges of irrationality and superstition – and making the guillotine and the gulag far more likely.

There’s more to it, of course, but the manifold pathologies Gregg dissects so perceptively all stem from the pernicious myth of the incompatibility of faith and reason. Along the way, Gregg attempts to reset some other widely held assumptions. For example, the self-proclaimed Enlightenment, for all its rationality, was by no means universally hostile to faith. Nevertheless, that hasn't prevented this misconception from becoming, ironically, an article of secular faith. Over the years science created experts who, over the years (remember, this is a gradual process) have come to understand human beings in strictly materialistic terms; just so much wet cement to be poured into the appropriate mold. The experts' declared aims – liberation from restraints (pain, disease, “superstition”), the maximization of happiness (pleasure, ease of mind and body) – are attractive enough to lull the cement into not really caring what that mold looks like. Thus our God-given reason constructs a hell on earth.

At Hillsdale College this past September, Victor Davis Hanson remarked, “If you try to make sense of the nonsense we’re seeing every day, it’s very difficult”. But comprehending the source of the manifold pathologies debilitating the West—using our reason, guided by faith—makes it a lot easier. And understanding might just bring a solution. Like all books of this type, in the end Gregg offers hope of better days and, considering the intractable nature of humanity’s need for God and the unfailing goodness He lavishes on us (whether we accept it or not) despair would be irrational. Like the book he’s reading, John McLain is admirably clear, though just a tad too impersonal.

Great material, a difficult topic as it involves philosophy, which sometimes isn't easily to keep track of who and what..

I was having a tough time with the narration sometimes. Hard to keep interested as it seemed to me to be slightly monotonous.

Also, there were important points in here and some mundane points. Somehow the telling of the story didn't get me catching on sometimes. My fault I'm sure, but it seemed more difficult than should be.

Overall great book. Liked it a lot. Great review of faith and reason.

Probably actually better than just good, but admittedly I have a lot to learn, so my appraisal is modest. I chose it because it comes out of the Acton Institute, which I have found balancing in recent times. This was yet another book that added to my attempt at a deeper understanding of the roots of our modern political situation, and disorder. It leans heavily on what seems like a natural theology basis Drawn from Aristotelian, Thomistic and generally Enlightenment thinking about the relationship between reason and faith in Western civilization; a foundation which is both robust and perhaps deceptively attractive, pressing the limits of epistemological neutrality. I admit, I’m trying to climb a mountain from a mole hill, but I am prayerfully trying to listen, learn, and better understand what it means to be a Christian thinking through these providentially distressed times. I found Patrick Deneen’s book Why Liberalism Failed much more attractive in its critique, and definitely needing to be read again.

I have a more "progressive" view of most of the themes covered but still found the information useful.

In spite of the heavy competition in the market of books about the rise and fall of the west, this little gem is a great addition to the genre. Gregg shows a good understanding of the three central religions of the world and makes a cogent argument for their influence on our current situation.

there is quite a bit to absorb here in a book that discusses reason and faith and to no small extent philosophy. perhaps I'm not sharp enough to grasp it as quickly as it's narrated but I found the material to be eye-opening. I intend to obtain a hard copy so that I may reread this at my pace and shut down notes.