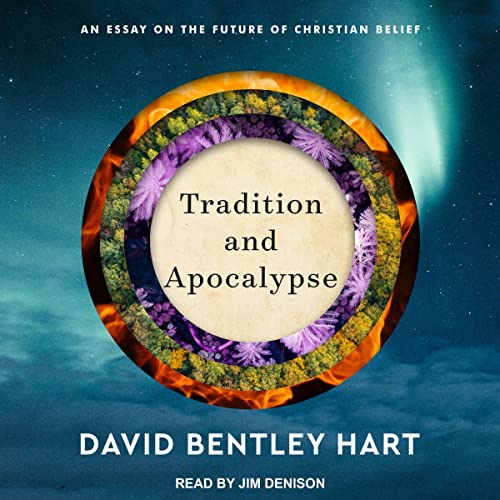 By: David Bentley Hart
Narrated by: Jim Denison
Try for £0.00

In the 2,000 years that have elapsed since the time of Christ, Christians have been as much divided by their faith as united, as much at odds as in communion. And the contents of Christian confession have developed with astonishing energy. How can believers claim a faith that has been passed down through the ages while recognizing the real historical contingencies that have shaped both their doctrines and their divisions?

In this carefully argued essay, David Bentley Hart critiques the concept of "tradition" that has become dominant in Christian thought as fundamentally incoherent. He puts forth a convincing new explanation of Christian tradition, one that is obedient to the nature of Christianity not only as a "revealed" creed embodied in historical events but as the "apocalyptic" revelation of a history that is largely identical with the eternal truth it supposedly discloses. Hart shows that Christian tradition is sustained not simply by its preservation of the past, but more essentially by its anticipation of the future. He offers a compelling portrayal of a living tradition held together by apocalyptic expectation - the promised transformation of all things in God.

What listeners say about Tradition and Apocalypse

DBH is here at his most loquacious which makes this a hard listen. However, there is so much here to profit from, I have ordered a hard copy. His argument is both convincing and significant, and deserving of wide acceptance. One hopes that such insight will not only describe more accurately the sense in which truth comes to us in a living tradition, but also become a part of what shapes and moves us towards its final form, yet to be revealed. Thank God for DBH!

After 30 minutes I gave up.

Beyond the narrator's boring voice, the material may as well be written in Egyptian.

I doubt the author's ability to communicate his message, whatever that may be, to an actual human being, or your neighbor, or the elderly woman down the street.

Perhaps the editor's took too much, or not enough, control of the text itself, and what came out was the garbled language of a drowsy robot.

As some who has miraculously escaped the dark dungeon of traditionalism (of the Catholic and Orthodox variety) DBH is the breath of fresh air that I need. I am very grateful for his work, and this one especially.

A good overview of history of doctrine issues. My only problem is that he left out Harnack. I had never quite put tradition and apocalypse together. But he does a good job of highlighting the tension between the two in the early church.

Another masterpiece by DBH

A book worth reading on how Christianity and doctrine change and morph through the ages and into the future. Chapter 7 is exceptional and I would start there.