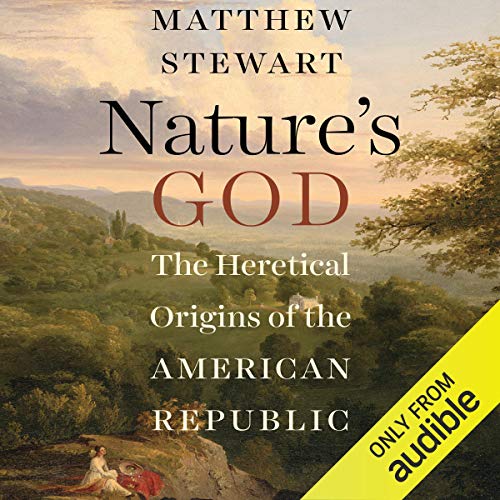 By: Matthew Stewart
Narrated by: Michael Quinlan
Try for £0.00

Where did the ideas come from that became the cornerstone of American democracy? Not only the erudite Thomas Jefferson, the wily and elusive Ben Franklin, and the underappreciated Thomas Paine, but also Ethan Allen, the hero of the Green Mountain Boys, and Thomas Young, the forgotten Founder who kicked off the Boston Tea Party. These radicals who founded America set their sights on a revolution of the mind. Derided as "infidels" and "atheists" in their own time, they wanted to liberate us not just from one king but from the tyranny of supernatural religion.

The ideas that inspired them were neither British nor Christian but largely ancient, pagan, and continental: the fecund universe of the Roman poet and philosopher Lucretius, and the potent (but nontranscendent) natural divinity of the Dutch heretic Benedict de Spinoza.

Drawing deeply on his study of European philosophy, Matthew Stewart pursues a genealogy of the philosophical ideas from which America's revolutionaries drew their inspiration, all scrupulously researched and documented and enlivened with storytelling of the highest order. Along the way, he uncovers the true meanings of "Nature's God", "self-evident", and many other phrases crucial to our understanding of the American experiment but now widely misunderstood. Stewart's lucid and passionate investigation surprises, challenges, enlightens, and entertains at every turn, as it spins a true tale and a persuasive, exhilarating argument about the founding principles of American government and the sources of our success in science, medicine, and the arts.

What listeners say about Nature's God

Truly an exceptionally great book about the history of ideas. Very scholarly and erudite, so some lay readers may find it dry, but is is written with such passion, eloquence and wit that a lover of truth will feel overpowered. For a philosopher, it melts on the tongue like a delicious frothy mouthful of whipped cream.

The performance is excellent, too, and foreign languages are generally correctly pronounced, although almost all of the material is in English.

The Epicurean, Spinozist legacy of modernity deserves to be revived - and what better way to do it than by a necromancer of such caliber!

Excellent exploration of this subject

Stewart has written an excellent exploration of the philosophical groundwork that informed the religious and political thinking of the men who wrote the Declaration and the Constitution. He takes the unusual approach of weaving his story around the lives and deeds of Ethan Allen and Thomas Young (a fomenter of the Boston Tea Party and a mobile gadfly during the years leading up to the war).

The work is challenging but rewarding, as Stewart explicates the elements of texts by Lucretius, Bruno, Descartes, Spinoza, Hobbes, and Locke. He then shows how these ideas permeated the thinking, writing and activities of Allen and Young in particular, but also many other leading figures of the Revolution. This is a refutation of the idea that the founding fathers intended the country to be a Christian land, a refutation that is grounded in fact, not assertion.

Some of the chapters were long and disjointed, but otherwise this was an excellent study on a subject that mainstream Christian Americans either ignore or are ignorant of. Very interesting.

A must read for any student of philosophy or enthusiast of history.

One of the best books Ive ever read about America’s founders, the philosophy that influenced them and the first “great awakening”! A must read/listen

Overall this was an amazing, if dense, book, and the production was well read. However, it was apparent at numerous points in the audio that re-recording had occurred and was hastily patched in, the result being at times harshly differing volumes and tones/qualities of voice. But for this defect, the product would have been perfect.

An important book and highly entertaining!

A text like this is sorely needed for inclusion in any historical education into the founding of modern democracy,, and broadly speaking,, the modern age in which we live.
While on first reading there is a lot here to take in, subsequent readings can only instill in the reader a wish for yet more.
The topic fairly begs for a follow-on work to trace the trials tribulations and progress of the revolutionary philosophy across the subsequent two centuries.

Everything you ever wanted to know about the philosophies of the founding fathers but were never told. An amazing work!

I liked the review of the historical views of God and the explanation of how and why they they got put in the founding documents of the United States.
It gives me a strong conviction that they knew what they were doing.

This is an excellent book. That said, I would recommend that the reader have some familiarity with philosophers of the enlightenment such as Spinoza and Locke before jumping in. If you find political philosophy interesting, I believe you will enjoy this book.

I enjoyed this book tremendously. I feel like I think similarly to what is being provided here. Definitely shows how history is a story that continues to be written. Only issue I had was that I had a hard time keeping up, as my thoughts would wonder as the book would continue on. Key take away: let people be themselves. We do not have the right to expect everyone to fit one mold.

A fresh and unsanitized look at the Founders.

A must-read for anyone interested in the ideological and theological foundations of America's Founding Fathers.