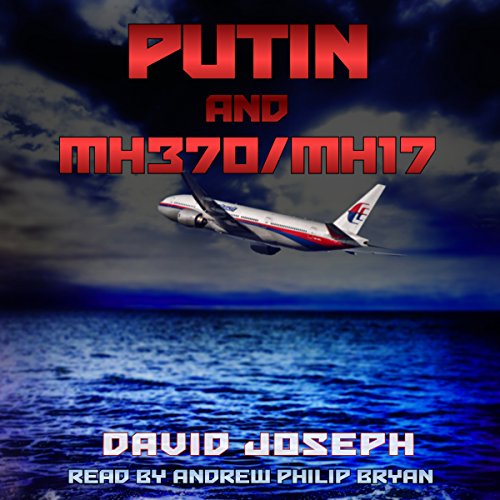 By: David Joseph
Narrated by: Andrew Philip Bryan
Try for £0.00

David Joseph's "The Great Hijacking", "Putin's Shoot-Down", and "The Bully" all bundled into one book titled Putin and MH370/MH17.

A Boeing 777 takes off from Kuala Lumpur International Airport and rendezvouses behind an American tanker refueling fighters, thus falling in its radar. Chinese military computer hackers break into a key defense satellite, a North Korean cargo ship drops a black box into the Indian Ocean, and a home flight simulator has traces of island landings in the Indian Ocean. All the events combine to produce a perfect storm for "The Great Hijacking".

Two Malaysian airliners meet disaster within a few months. At the 2014 Sochi Olympics, Vladimir Putin contemplates his next move after the United States fails to deliver $1 billion that Putin deems belongs to him. A few days later, an airliner mysteriously disappears - believed to be at the bottom of the sea.

"The Bully", a Cold War short story classic. One month after the Soviet invasion of Afghanistan, an HH-3, Jolly Green, rescue helicopter is sent on a mission north of Iceland to rescue a Russian with a head injury off a fishing trawler.

What listeners say about Putin and MH370/MH17

Interesting story but not substantiated at all and not clear if fiction either. Worthwhile superstition and plausible ideas.

This was a cool look behind the scenes in some very crazy political and war dealings. It felt kind of like a realistic spy novel in the first story, a political thriller in the second stories, and a fun war story in the third story. In the first story there were a bunch of tense scenes that were exciting to listen to. I particularly liked the scenes that had to do with commercial airplanes. I used to work at an airport and it reminded me of being around big commercial jets.

The narrator Andrew Philip Bryan has a great voice which made for an enjoyable listen. He has a pleasant British accent. His accents for the characters from other countries could use some work though.

This book was well researched. It gave a lot of details about specific technologies and equipment used. These details added to the realism of the stories. In reading this book you get to hang out with some terrible powerful world leaders.

I enjoyed the author's note before the third story. It was cool to know he had some personal experiences that inspired the story. If you like military stories and appreciate reading books that get the technical aspects right check this one out.

Where does Putin and MH370/MH17 rank among all the audiobooks you’ve listened to so far?

The MH370 story ranks up there as the most plausible theory I have read on the missing Malasyian airliner. This added with the MH17 story and The Bully story ranks as one of the best audiobooks I've listened to lately.

What was one of the most memorable moments of Putin and MH370/MH17?

The camps in North Korea!

Which character – as performed by Andrew Philip Bryan – was your favorite?

I liked the character Sam in The Bully

The flag salute in the Bully.

Great audiobook for the price!