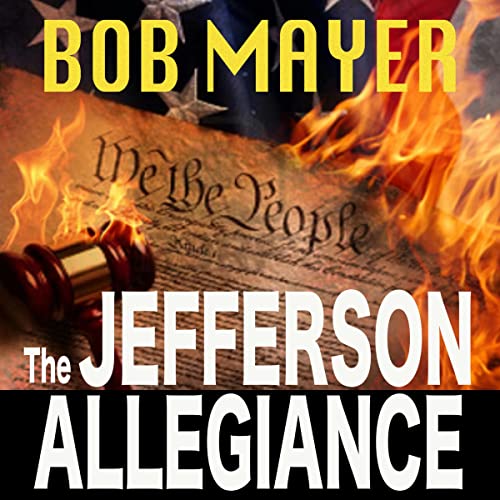 By: Bob Mayer
Narrated by: Steven Cooper
Try for £0.00

The 4th of July 1826. As Thomas Jefferson lies dying, he gives his part of his Jefferson Cipher to Edgar Allen Poe, with instructions to take the disks to West Point. In Massachusetts, John Adams entrusts his part of the Cipher to Colonel Thayer, the superintendent of the Military Academy. As Thayer rides away, Adams utters his final words: "Thomas Jefferson survives."

In the present, Green Beret Paul Ducharme has been recalled from Afghanistan after the "accidental' death of his best friend, the son of one of the Philosophers. While Ducharme is visiting his friend's gravesite in Arlington, an old man is executed by a member from the Society of Cincinnati know as the Surgeon, who is seeking to gather all the pieces of the cipher. In a nearby restaurant, former CIA and now Curator at Monticello, Evie Tolliver, waits anxiously for her mentor to arrive, but he's killed by the same assassin at the Zero Milestone. His heart and the Philosopher's head are displayed as a grisly message on top of the stone, echoing Jefferson's famous head-heart letter.

The story is a race back through history and the founding of the country.

This is the first book in a new series: The Presidential Thrillers, each novel based on a historical puzzle left behind by a President. The Kennedy Endeavor will be released in summer 2012.

In 1802, President Thomas Jefferson, well known for his strong opposition to a standing army, established the United State Military Academy, the oldest Military Academy in North America. In 1819, Thomas Jefferson founded the University of Virginia, the first college in the United States to separate religion from education. It has its current headquarters in Philosophical Hall on Liberty Square in Philadelphia.

"The tree of liberty must be refreshed from time to time with the blood of patriots and tyrants."—Thomas Jefferson 1787.

Praise for Bob Mayer: "Mayer had me hooked from the very first page." (Stephen Coonts)
"Exciting and authentic. Don't miss this one!" (W.E.B. Griffin)
"Fascinating, imaginative and nerve-wracking." ( Kirkus Reviews)

What listeners say about The Jefferson Allegiance

I have read the Kindle version of this story years ago, and the author kindly provided me a copy of the audible version.

This story merges historical fiction with fact, implying that certain events in US political history happened due to the power of the Jefferson Allegiance, and amendment to the 2nd Amendment of the constitution that requires the Military to remove any Federal Official who betrays the country.

The story follows a US Army Green Beret and former CIA officer who have to find the Jefferson Allegiance after the previous protectors were murdered, the Allegiance is protected by high ranking military officers from each branch of the US military and a civilian who is the chair, ensuring civilian control.
On the opposite side is a cabal who want to control the US by taking possession of the allegiance by any means necessary and have infiltrated people into positions of power to aid them.

The story was enjoyable and kept me entertained, I listened to it over a couple of days, blitzing the final 4 hours as I wanted to hear how it ended. Onto book 2!

If you could sum up The Jefferson Allegiance in three words, what would they be?

Each character's voice was uniquely different and the voices were consistent throughout the recording. I believe that the performance brought the characters to life.

With everything happening in the world today... The lies and deceit and empty promises in our current politicians really hit home with how they are betraying our constitution. This was an exhilarating adventure with a frightening real world feel.

An exciting read with great characters!

I thought the book kept me on the edge of my seat and I enjoyed the history lessons.

The only people who might enjoy this story are those who haven't read any of the miriad of conspiracy thrillers written in the last 2 decades.

What was most disappointing about Bob Mayer’s story?

What character would you cut from The Jefferson Allegiance?

I would cut all of the characters.