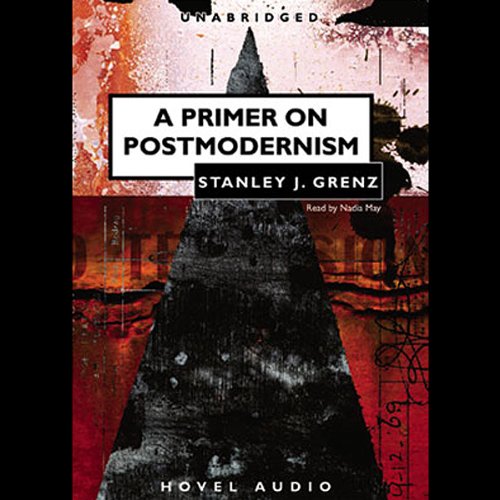 By: Stanley Grenz
Narrated by: Nadia May
Try for £0.00

From the academy to pop culture, our society is in the throes of change rivaling the birth of modernity out of the decay of the Middle Ages. We are now moving from the modern to the postmodern era. But what is postmodernism? How did it arise? What characterizes the postmodern ethos? What is the postmodern mind and how does it differ from the modern mind? Who are its leading advocates? Most important of all, what challenges does this cultural shift present to the church, which must proclaim the gospel to the emerging postmodern generation?

Stanley Grenz charts the postmodern landscape. He shows the threads that link art and architecture, philosophy and fiction, literary theory, and television. He shows how the postmodern phenomenon has actually been in the making for a century and then introduces readers to the gurus of the postmodern mind-set. What he offers here is truly an indispensable guide for understanding today's culture.

What listeners say about Primer to Postmodernism

The author is not a philosopher he is an academic theologian who is attempting to explain to Christian practitioners what does post modernism mean and how modern Evangelical Christians need to deal with its effects. He writes the book in 1996 and is sort of dated in some respects such as when he says MTV is fragmenting society (what's MTV? is it still even on TV now days?), or when he says that when Michel Foucault moved from France to California in the 1960s he got to have "free reign to practice his homosexual impulses". That's just offensive to me on many different levels, and things like that made we want to not like this book, but, overall I can recommend it, if you ignore weird statements like that, and also for me, when he goes into 'evangelical speak' especially the last chapter, I had no idea what he was talking about. (I don't really get it when evangelical's start talking about Jesus and God as being "God is man" and "man is God". I understand it when St. Thomas Aquinas discusses that in the Summa Theologia (third part, question 16 article 2 & 3), because he ties it together with Aristotelian thought and states his premises, and he incidentally concludes the affirmative for both assertions, but evangelicals tend to lose me when they make their assertions without logical support and not stating their premises).

There's something about having a non-expert (a theologian in this case) explaining philosophy so that a general audience can understand it. He's not an expert and obviously was learning as he was going on and thus he made the subject matter very accessible. The author defines postmodernism mostly through the thought of the the trinity of post modernist, Foucault, Derrida, and Rorty. The real strength the author brings is how he can summarize complex areas of thought by saying things such as "Foucault is a student of Nietzsche, Derrida take Nietzsche and looks at how Heidegger has made him post modern, and Rorty is a disciple of John Dewey and his pragmatism". That's a compact statement, but the author had previously explained what all the particulars and players meant earlier in the text.

The author also steps the listener through some of the enlightenment thinkers up to Kant, tells what structuralism means, and some of the other pieces needed for understanding the trinity of post modernism and includes a section on Gadamar and his magus opus "Truth and Method" one of my favorite books. I had not realized how that book had fit into the overall scheme of things or how it related to post modernism. For post modernism literature he was a little bit sketchy, He mentioned that Sherlock Holmes would be the quintessential modern literature. The clues are there and it takes Sherlock Holmes to discover them and put them together. He then said, the spy novel has elements of post modernism since the world the spies live in appear to be like our world but things are not what they seem, and finally he said Science Fiction is usually post modern. I felt the author did a substandard job on explaining literature because he didn't get specific and just dealt with genres.

The Great Course Lecture, "The Modern Intellectual Tradition: From Descartes to Derrida", one of my all time favorite lecture series had covered the same material as this book did for the philosophers. I had not realize that lecture series had covered post modernism as well as it did. That's the problem with a lecture series, sometimes each lecture is marvelous in itself, but overall the listener doesn't connect the pieces thematically. This book connected the pieces thematically for me.

Overall, and if you hold your nose at some points, the author captured nicely and in a not overly complex manner how a theologian saw post modernism in 1996 and how a reasonable person can understand today's world just a little bit better than if they hadn't read this book.

The anatomy of modern thinking...

Thought is evolving both culturally, environmentally, and philosophically. So many of our current views, such as the appeal of spy movies as opposed to westerns, is a function of the philosophical evolution of thought. This book introduces you to many of the important thinkers that have at least documented this evolution, and in some cases led it. I enjoyed the book, but I was left with the documentation/creation dichotomy which I'm sure is both irreducible and dependent upon the limitation of my knowledge and my ability to understand in the context of my natural and cultural limitations.

However, that's the point of postmodernism, which can be described as a chipping away at certainty, and an increase in humility. There is no actual black/white but only those shades of grey that are senses and our minds can apprehend or comprehend.

A good read, and Nadia May always gives real authority to a work..

The initial social assessment of postmodernism was not too helpful, enjoyed the reviews of the postmoderns, but the critique from a Christian perspective was weak and not very helpful. Seemed like he was trying to apply a few concepts to Christianity, but he mainly took an onto-theological approach, which is the main point of postmodernism.

the author puts forth a concise overview of the creators(?) of postmodernism and then offers suggestions on how Christians might be able to adjust to the worldview.

This primer does what it sets out to. It gives a basic presentation of the postmodern era in light of its "mood" and philosophy, as well as the historical roots that gave birth to it. While his approach to engagement is debatable (ch 7), the rest is pretty well done.

This was a great way to grasp--at least partially--an understanding of the complex Postmodern ideal. The approach taken by the author was equal, fair, and unbiased to all different literary theories. I recommend every Contemporary Critic read this.

Would you try another book from Stanley Grenz and/or Nadia May?

Nadia May, sure! She is one of my favorite narrators. Grenz is Emergent.

Has Primer to Postmodernism turned you off from other books in this genre?

No, though it is a poor example, being more propaganda than anything else.

Have you listened to any of Nadia May???s other performances before? How does this one compare?

As good as the others.

If you could play editor, what scene or scenes would you have cut from Primer to Postmodernism?

Scenes? That is a dumb question.

I read this book for a doctoral class. I have both a hard copy and the audible. I got the audible because I spend a lot of time driving. I wanted to listen to chapter seven and realized it is missing. This book has seven chapters. Where is chapter 7?