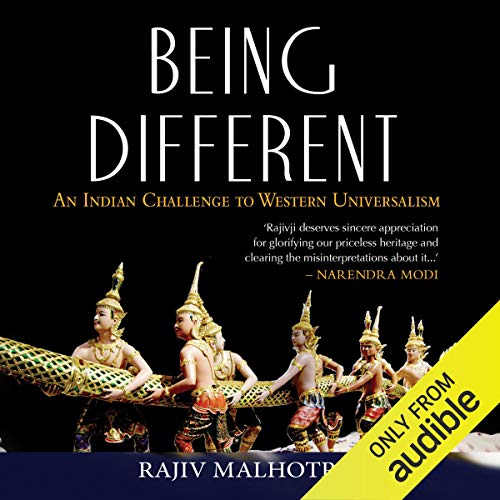 By: Rajiv Malhotra
Narrated by: Kanchan Bhattacharyya
Try for £0.00

India is more than a nation state. It is also a unique civilization with philosophies and cosmologies that are markedly distinct from the dominant culture of our times - the West.

India's spiritual traditions spring from dharma, which has no exact equivalent in Western frameworks. Unfortunately, in the rush to celebrate the growing popularity of India on the world stage, its civilizational matrix is being co-opted into Western universalism, thereby diluting its distinctiveness and potential.

In Being Different: An Indian Challenge to Western Universalism, thinker and philosopher Rajiv Malhotra addresses the challenge of a direct and honest engagement on differences by reversing the gaze, repositioning India from being the observed to the observer and looking at the West from the dharmic point of view. In doing so, he challenges many hitherto unexamined beliefs that both sides hold about themselves and each other. He highlights that while unique historical revelations are the basis for Western religions, dharma emphasizes self-realization in the body here and now. He also points out the integral unity that underpins dharma's metaphysics and contrasts this with Western thought and history as a synthetic unity.

Erudite and engaging, Being Different critiques fashionable reductive translations and analyses the West's anxiety over difference and fixation for order which contrast the creative role of chaos in dharma. It concludes with a rebuttal of Western claims of universalism while recommending a multicultural worldview.

What listeners say about Being Different

I used audible to listen to it. I like the narration with logic, reasoning, sense of eastern view point with the narration style. Memorable points wold be how points are made: without fallacies, simple to understand and remember, clear and precisive. I like the author's use of "I" or an expression rather than the third person view that is so prevalent in many other. Very clear stand point, so one don't have to infer who is speaking. I dislike use of some heavy words, but that might be just me or subjective. PS: It is my experience and opinion, form your own please don't judge.

This is the best book by far on Indian culture and heritage, outlining the difference between the indian and the western culture and way of thinking. Very inspiring and provocative book.

The truth finally comes out

Rajiv is brilliant and his painstaking academic research finally puts into words the truth that all Indians know in their heart. We have been relentlessly attacked by western media, pop culture, and education yet with the simple act of even very occasionally visiting our temples and performing our poojas has kept our hearts filled with the truth. Thank Rajiv for giving me the language with which to communicate who & what I am.

a fantastic book. every indianshould read this

Rajiv's research and arguments are very strong. he really makes some eye opening points. everyone should embrace their own uniqueness and Indians should study the purva paksha of the other civilizations and cultural entities

In-depth diff btwn Dharmic and other religions

Loved the content. Clear explanation backed with deep research. The use of purva paksha explains the difference between western concepts and Dharmic ideas without giving in to the anxiousness of unity in diversity.
The richness and beauty in the complexity of real world is systematically accounted for in dharmic traditions. The need of Abrahamic religions to narrowly classify things in dualistic way and its limitations are explained clearly with several examples.

a great book to understand Hinduism

profound insights simplified in a rational way for today's audience. very thorough research that provides insight into a religion that is complex and vast.

Absolutely essential for all

This book reminds me of this quote “We shall not cease from exploration, And the end of all our exploring Will be to arrive where we started, And know the place for the first time."
I knew most of this at some intuitive level but never crystalized. Grew up in India went to a Christian school, learnt both Christianity at school and Hinduism through culture and stories. This book is critical in expressing and challenging the Dogmatic Supremacist Western approach to philosophy & logic whilst pitting alternatives from the Hindu thought.
I bought the kindle version too for reference.
Excellent much needed work.

A must read for every self respecting Indian who values the ancient Indian traditions and follows the Dharmic way of life, irrespective of religious faith.

This is a brilliant exposition, treatise and analysis of Hinduism Unot its teachings). Being such a heayy subject, I may have to read it once more to flly comprehed. Because the author has taken great pains to dig deep into the subject and give us the purest essence on what is hinduism, how different is itfromother religion, how open the architecture is aparat frombeing welcoming, and how this type of architecture eveloped, how pereptions helped inits formation, what is Sanatana Dharma, how Sanskrit was formed as sound and vibrtion, andh how it gives power to mantras and so on. Eceptional coverage. Please don;t give this a cursory reading.