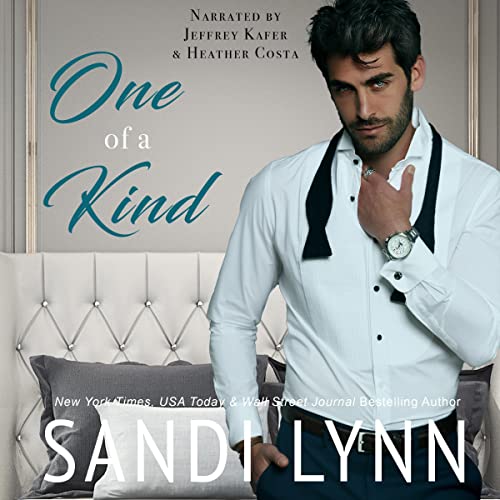 One of a Kind

By: Sandi Lynn
Narrated by: Heather Costa,Jeffrey Kafer
Try for £0.00

I made a promise not to sleep with my new personal assistant.
Too late.
I’d already slept with her before I knew Grayson, my human resources director, hired her.
Long story short.
We first met at a café when she let me have the last apple turnover.
Then I saw her again that same night at a bar.
She was incredibly sexy, and she wanted me as much as I wanted her.
We both agreed it was a one-time thing, and she left the following day.
Imagine the shock on both our faces when she showed up for work on Monday.

I wasn’t a relationship type of guy and for good reasons.
Julia Benton had her own reasons why she wasn’t looking to get involved with anyone.
So, continuing our sexual relationship was a win-win for both of us.
But the more time we spent together, feelings I’d never felt before started to emerge.
Then things became complicated, and she quit to pursue her dreams.
I knew how much it meant to her, and I didn’t care.
Now that I’d lost her, I wanted, no, I needed her back in my life, and I would do anything to make sure that happened.

He was the sexy and domineering man who wore an expensive suit.
A man who cracked the hard shell I’d built around myself for the past four years.
I wasn’t looking for someone to save me, but Sam unintentionally did just that.
Then I was given a chance to pursue my lifelong dream.
He tried to stop it from happening by showing me exactly who he was.
My only focus now was starting the business I’d always wanted and leave Sam behind in the trail of a disaster he created between us.
The problem was: He truly was one of a kind, and I had to use every bit of strength I had to forget him.

What listeners say about One of a Kind

Sweet and funny. The narration was great. I love the way they came together. The ups and downs make it real.

One of a Kind is book one in the Kind Brothers series. Sandi Lynn has done it again pulling me in and making me fall for her cocky billionaires. The best part is uncovering the real man underneath the jerk. Sam Kind was a jerk among jerks, but that didn’t keep Julia from putting him in his place on the daily. He’s managed to sleep with and run off all his personal assistants, but Julia had a wall around her and she was able to give it right back. The banter between these two was great and watching them both fall was even better. This book was hot and steamy, but tender too. You will fall for all the Kind brothers and be anxious for their story as well.

The narrators did a fantastic job bringing this story to life!!

I am so excited this series is coming to audio… this first book was fun, love these brothers and how they take care of each other … read all the books and love this Author and the narrators are new to me they did a good job