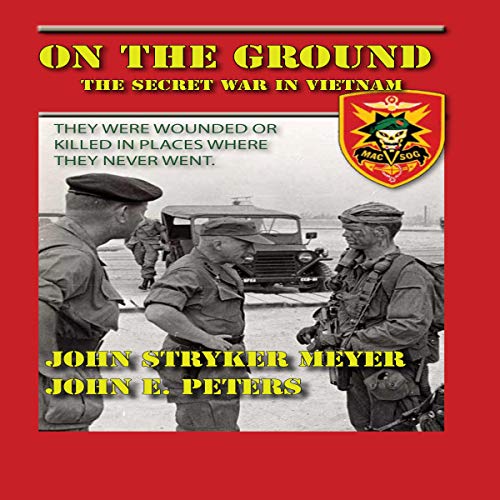 During the Vietnam War, a “secret war” was fought across the fence in Laos, Cambodia, and North Vietnam, unknown to the media or the public, under the aegis of the Military Assistance Command, Vietnam’s top secret Studies and Observations Group. SOG’s chain of command for missions and after-action reports extended to the White House and the Joint Chiefs of Staff.

What listeners say about On the Ground

The way that John talks about his time in Vietnam is so matter-of-fact at the books full impact doesn’t really hit you until you stop and think about what he is describing. The humour and attention office story with the matter of fact narration makes this not only historical document but also a dam good listen would recommend the series to anyone and hope to have more

amazing book some of the things these men did is incredible and to be alive at the end is a testament to their skill and bravery as a soldier.
worth listening to and wish it did not finish.

almost too unbelievable to be true

I've listened to most of John stryker meyer books and podcasts and the guy is a legend with some brilliant stories to tell, but please, please use someone else to narrate and edit the audio books!
awesome SF soldier? without a doubt! Narrator? Not so good. just my opinion.

Amazing true stories from the Vietnam war. Unbelievable courage from the men going over the fence. Interesting observations about senior officers failing the bravest of the brave

The audio version was horrible

I could only listen to about 5 min of this book. The audio performance was like listening to someone struggle through a book above their reading level, or someone just learning to read. I’m sure it’s a great story, but don’t get the audio version.

Ooof the reading is hard to listen to…

- [ ] Let me start by saying I have the absolute utmost respect for Tilt. I’ve listen to just about every podcast he’s been on (thanks Jocko) and purchased all his books. The book is written in his typical first person perspective. It is well written. The breaks down however is the same as his other book, it’s the readings. When you compare it to other MACVSOG books like Uncommon Valor, SOG Medic, We Few, Whispers in the Tall Grass, there is a clear difference is the experience. On the Ground is jarring to listen to. The halting cadence of the read is distracting and the unedited repeats at the start of the book could have easily been edited in post production. It is the audio version of someone using a typewriter, get to the end of the line and use the handle to shift up and back to the left. It’s extremely difficult to listen to. The most a coward part is in Chapter 3 when additional, first-person emphasis is placed on certain folks. This book should take its place alongside the above mentioned SOG titles and perhaps it does in written form. The audio though makes it one I want to listen to more than once but will not because there are better books available. If production costs are the issue, Tilt it would be my honor to cover the costs. Your tireless efforts to memorialize the memory of MACVSOG should have every advantage available. Happy to help.

Loved the story, But next time Hire a Professional Narrator…. Respectively

Amazing stories... Real Life Rambos!! I found Tilt for Jocko Podcast and have been intrigued since.

Amazing story by a true American Hero. Some reviews criticize the authors reading style but I enjoy hearing the story from his own voice which adds flavor and realism.

This book is nothing short of amazing and when I start to feel my trivial problems in life are overwhelming I think about Tilt and the guys from SOG and what they went through and in their early 20s. I appreciate it was read by the man himself and I can’t imagine it any other way, despite other reviews. Thank you Tilt for sharing your stories personally as I’m sure some are painful. Thank you for your service. Read these books people.

Speed it up a little

Great book read by the man himself, if you need a fancy voice actor to read to you this might not be your book. Though it's read just fine. My guess is that the clear pronunciation and slower pace is from understanding what comes across best for comms. Speed up the reading a little, I think I did 1.5x and you'll be golden. There are some truly remarkable tales you'll not soon forget.

Speed up by .2 to help with Mr Meyer's slightly strange cadence. Thankfully he is able to read his own account of this intensely fascinating part of history.

I loved this book the min it began. It’s amazing and I think all service members should hear or read it.