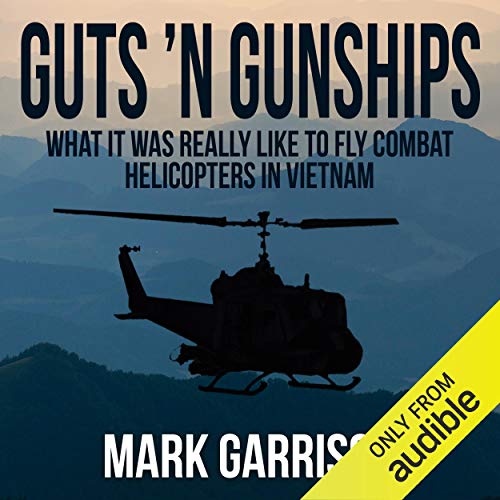 By: Mark Garrison
Narrated by: Eric Martin
Try for £0.00

In the summer of 1967, Mark Garrison had dropped out of college at Southern Illinois University just before entering his third year. He had run out of money and had to work for a while. These were the days before the lottery and the draft soon came calling. In order to somewhat control his own future, he enlisted in the US Army's helicopter flight school program. Little did he know that this adventure would be the most profound experience of his life.

Garrison flew hundreds of missions for the 119th AHC, stationed in the Central Highlands at Camp Holloway in Pleiku, Vietnam. He was awarded 25 Air Medals, four campaign Bronze Stars, and The Distinguished Flying Cross, among numerous other awards. His narrative takes you through the whole process, from basic training, flight school, flying combat in Vietnam, and his return to the United States. His description includes many incidents in combat flight, including being hit by rocket propelled grenades and being on fire in the air, over hundreds if not thousands of enemy troops. But this is not all. He elaborates on the daily lives, emotions, and nuances of the pilots and what they considered their mission to be.

Guts 'N Gunships is a must listen if you are to have a realistic understanding of what flying helicopters in Vietnam combat was all about.

I have read more biographies about the Vietnam War than any other period of history. What I enjoyed most about Guts ‘n’ Gunships was how close it made me feel to the narrator and his fellow pilots. I felt that I had got to know them all personally.
This is a personal history that brings the dangers and emotions of war straight home 60 + years later.
I hope the author is living a peaceful life.

Great book understated story. Well worth a listen brings home in a subtle way the struggle and pain of this war.

This is one brilliant story, read really well and even if you are not into aviation the writer cared to explain all the little details. Much recommended

I hate to say this as I had high hopes for this book.
But it never really got going…….even in the action parts.
It was just more of the same followed by more of the same.
You think ok it’s about to kick off but no.
Shame.

As far as Vietnam memoirs go, this has to be up there with the best. A very frank telling of the ups and downs of life in Vietnam as a helicopter pilot.

great memories from
20 something's.. who under great pressure and with responsibility way beyond their years earned the title of warriors..
most 20 year olds can't even organise themselves to get on a bus in these days.

I had no idea how crazy it was to fly gunships in Vietnam until I read this book.

As real as it gets.

Unrestrained telling of one man's battle before, during and after the conflict. This book is a no holds barred look at the life of a combat aviator. This book is not for those with a weakened constitution, as it does not pull punches. A must read for those who enjoy the truth.

Great insight into the pilots way of life

A worthy listen, easy to absorb and some chapters are worth repeating. Left wanting more.

you need to listen at least twice to actually hear the story. Having been a military helicopter pilot I understand the camaraderie and I flew with Mark through every chapter. 10/10.

This is a memoir of a helicopter pilot from the Vietnam War. Garrison tells what it takes to be a helicopter pilot in combat. Garrison covers the time from his enlistment, boot camp, helicopter school to his combat missions in Vietnam. The author goes into detail about combat action and also includes wartime humor, and the loss of friends.

The book is well written. I noted that the author flew hundreds of mission for the 119th AHC, stationed in the Central Highlands at Camp Holloway in Pleiku, Vietnam. He was awarded twenty-five air medals, four campaign medals, four Bonze Stars and the Distinguished Flying Cross among the list of medals. Garrison’s extensive combat experience comes through in the book. I found it interesting that after his war service ended Garrison decided to become a chiropractor. Seems he was following in his father’s footsteps. Eric Martin does a good job narrating the book.

As a Huey and later, Black Hawk crew chief in the '80s and '90s, I had heard plenty of stories about "Slicks" and "Gunships", from guys who were there. I had not heard specifics of their missions and how they operated. Of course, I wouldn't because these guys were humble and didn't bring attention to themselves. This book opened my eyes to the reality of the Helicopter's mission in Vietnam and the brave men who crewed them.
Vietnam was so highly politicized, many forget the incredible skill and bravery of the U.S. fighting man who, in most cases, served not because they wanted a military career, but because of a sense of duty. These men were cut from the same cloth as the incredible warriors who fought in WWI, WWII, Korea and the wars of today. I'd love to see a resurgence of books about the Vietnam war without all the political nonsense we've been forced to swallow for the last 40+ years!
This book was well written. The story was gripping, terrifying, funny and at times, sad. Eric Martin's narration was spot on and excellent. I'd highly recommend this book to anyone and everyone. Especially those interested in Military history, or U.S. History in general.

What was one of the most memorable moments of Guts 'N Gunships?

Just when I thought things couldn't possibly get any worse... They did! (Paraphrasing Mark Garrison)

I was a helicopter pilot in my youth flying Dustoff or medevac helicopters in VietNam so I was very anxious to hear about Mark Garrison's adventures. I was not disappointed. I learned things that I did not know about gunships. I had deja vu moments listening to his tales. This is a good solid collection of tales and memories. I highly recommend that you read it. You won't regret it.

I was given this audiobook in exchange for an honest review.

Huei pilots were insane, the Huei was a gift from God, Mark Garrison is insane, and this books gives good account as to why the most fearless men who ever served in the military ranks were the Vietnam Huei pilots.

"Okay, sir, you've only got 2 feet back here, okay 1 foot, okay you've got no room, sir" when referring to rotor blades hitting trees??? That's just a taste of the insanity these men lived. It's no wonder Slick and Croc pilots of Vietnam are considered to be some of the bravest men of the military.

Mark's book makes an effort to give stories of flight and the war, but also of daily life in country, relationships and down time, and shenanigans. It seems like a balanced effort to describe the full experience of Huei pilots.

I doubt you'll regret this book.

Where does Guts 'N Gunships rank among all the audiobooks you’ve listened to so far?

It is one of the best books of this type I have listened to.

What was one of the most memorable moments of Guts 'N Gunships?

The time when his ship was almost destroyed on mission

Eric is without a doubt a master narrator. His voice was always clear and understandable. He put real feeling into those moments when fear and panic had to have been driving emotions though the roof.

I was given this book in expectation of a review. I was skeptical at first because memoirs are normally dull and dry. I found that this book brought back memories of my own military active duty during the Vietnam era. Though I was not in the Army I did serve during the same time frame.

I found the book to be extremely well written and the time line well laid out. It expressed the fears and the anxieties of men who go in harms ways. It also captured the ways men deal with them to maintain their sanity.

There was a "gallows humor" that pervaded the whole adventure. And unless one has experienced the 1960s in their awesome highs and lows they would not understand the way the military was treated in light of today.

As I listened to this book I could fully relate the Mark's fears and his coping. It brought light to an aspect of the war that I personally had not experienced and brought me to a better appreciation for their sacrifices and pain.

Enjoyed it and listened to it several times

As an audio book I enjoyed it very much. I listened prior to bed before drifting off. So I often had to replay it to catch up. Then I would listen through it entirely on a couple of other occasions.

What made the experience of listening to Guts 'N Gunships the most enjoyable?

The detailed descriptions of combat assignments and the comradeship.

What other book might you compare Guts 'N Gunships to and why?

Hmmm. So may good ones out there. I will have to think about which ones I will list here.

Have you listened to any of Eric Martin’s other performances before? How does this one compare?

Let me reflect on the one.i

Well worth the listen.

This was an excellent book. The narrator was excellent and the story holds your attention. You will find that the pilots did not have a cushy time in Vietnam. I recommend it.

Very well written. The narration was top notch. I too am from a small town in Southern Ilinios, attended SIU, took a taxi ride in Taipei, and familiar with the Sheltons and Birghers and dated several Vietnam vets. Mark seemed like a friend which made his story even more interesting.

A great book to listen to if you are a war history buff such as myself. That narration was great as well.