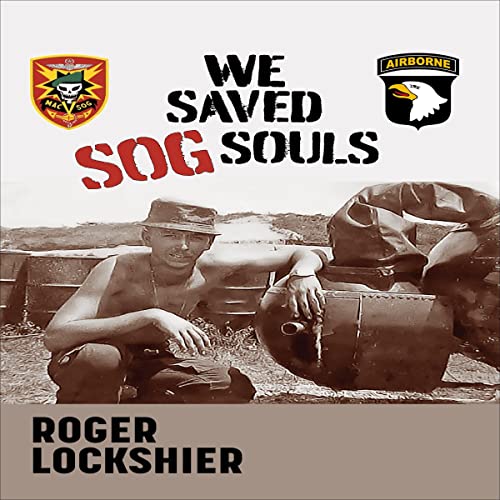 During the Vietnam War, far from the halls of Congress, snooping reporters, loving family members, and conventional US military forces in South Vietnam, a deadly, top-secret war was conducted for eight years across the fence in Laos, Cambodia, and North Vietnam by small Green Beret-led reconnaissance teams.

"Finally, a book by a 101st Airborne aviator on his heroic role in the eight-year secret war conducted during the Vietnam War by SOG Green Berets. Over the last decade there have been compelling books printed by SOG Green Berets who ran missions across the fence into Laos, Cambodia and N. Vietnam, often understating in general terms the critical role of helicopter units and aviators like Roger Lockshier. Now, Roger flies readers into the secret war, jutting through ack-ack anti-aircraft gunfire and the horror of being shot down in Laos, providing a well-written account that grabs readers' attention. Thank you Roger.” (John Stryker Meyer, author of On the Ground, Across the Fence, and SOG Chronicles)

What listeners say about We Saved SOG Souls

Really enjoyed this , it gave a different perspective of SOG from the air . These guys made it all work and absolutely fearless .

well worth a listen! Good to hear from the air support, with their point of view. with quite a few familiar names if you're into SOG history

Parts of this book brought me to tears. It is a story that needed to be told, both for the author and posterity. Men like Mr. Lockshier are the backbone of America. The heroism, comradery, & shear guts of these men are in comparatively short supply today, if for no other reason than the lack of awareness we as a people have to their very existence. The future of America now has another memoir of heroes who they can aspire to emulate. I am eternally grateful for the opportunity to, in some small way, share in these experiences. God bless you and all your SOG & 101st brothers. May your legacy endure forever. P.S. - This book should be available in every public library world-wide.

A well told personal story of a crew chief that stood in the door of his gun ship every day with his 60 mm implanting and answering rescue calls from our guy behind the wire.

If you’re interested learning about SOG from another perspective, this is a very insightful book and unique read.

Incredible book about our nations finest.

This book was well written, excellent narration and firsthand accounts of the heroism, ingenuity and bravery displayed by members of the Spec. Ops community in Vietnam. We all owe them a welcome home. This book was one of the finest I have read.

I’ve tried to read every book on SOG and it’s brave men. This is no exception, it tells the story from the view of a helicopter crewman that supported SoG men in the secret war in Indochina. If you like stories of SOG and green berets in Vietnam, this is a must read.

Different side and take on the secret war. Lockshier puts into perspective the sacrifice and teamwork that saved many lives and accomplished missions that many would deem crazy to attempt..!!!

From a Guy In Back

I’m a Vietnam Veteran who flew AH-1G Cobras in the 101st Airborne Division and had flown MACV-SOG CCN missions into the same area so I know where of the author writes. Of all of the Vietnam accounts I’ve read, this is the first one written by a “guy in back,” a Crew Chief/Door gunner on a C-model Huey gunship. Since Cobras only have a crew of 2, pilot and copilot/gunner, I had no experience with having a crew. This book filled that knowledge gap. The author writes with understated clarity. Some of his descriptions of combat action got my heart pumping and adrenaline flowing. I felt I was there with him. I cannot say enough good about this book. I listened to it as an audio book. The narrator was perfect, not always the case with audio books. The timbre of his voice, the pace at which he narrated, and the fact he pronounced sometimes-difficult terms and names correctly was a pleasant surprise. The narration and the account are top notch, First Class. If you are a Vietnam Veteran, this will certainly bring back memories. If you aren’t but want to know what it was like to fly and fight a helicopter during that war, this is the book for out. Thank you Roger Lockshier, for sharing this with us. AIRBORNE!!! ALL THE WAY!!!

Hard to express how much I enjoyed reading this book. As Mr Lockshier says, there aren’t many books about the part of the Vietnem War that he experienced.