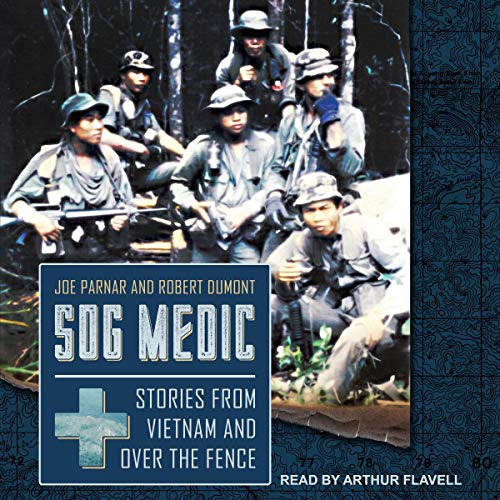 By: Joe Parnar,Robert Dumont
Narrated by: Arthur Flavell
Try for £0.00

In the years since the Vietnam War, the elite unit known as SOG has spawned many myths, legends, and war stories. Special Forces medic Joe Parnar served with SOG during 1968 in FOB2/CCC near the tri-border area that gave them access to the forbidden areas of Laos and Cambodia. Parnar recounts his time with the recon men of this highly classified unit, as his job involved a unique combination of soldiering and lifesaving. His stories capture the extraordinary commitment made by all the men of SOG and reveal the special dedication of the medics, who put their own lives at risk to save the lives of their teammates. Parnar also discusses his medical training with the Special Forces.

During his tour with SOG, Parnar served as a dispensary medic, chase medic, Hatchet Force medic, and as a recon team member. This variety of roles gave him experience not only in combat but in dealing with and treating the civilians and indigenous peoples of that area. There is a graphic account of a Laotian operation involving America's most decorated soldier, Robert Howard, during which Parnar had to treat a man with a blown-off foot alongside nearly 50 other casualties. It is a reminder of the enormous responsibility and burden that a medic carried.

What listeners say about SOG Medic

brilliant insight to a medics life in Vietnam

well read with great detail if you enjoy sog stories like the book across the fence this will be for you.

Narration: a bit slow but clear.

Story: important information about medics' experiences. Author's belittling of war protesters is at variance with legitimate objections to this unjust war. Information presented is interesting and more extensive than included in other Vietnam War memoirs.

Author espouses mistaken, naieve presumption that students accept uncritically professors' values and perspectives. Some do but most are doubtful and resistant to coercion.

Recommendation: Do listen. This author presents an important, alternative perspective.

As a veteran, who enjoys SOG books, A three year could written the story better! Sorry

Great story from an American hero

It's always a pleasure to read a book by a veteran who served his country willingly and with a sense of pride. And especially during Vietnam, when the service was unrecognized and often unappreciated. The sacrifice is duly noted. We all owe Joe Parnar a huge debt of gratitude. Serving as an SOG medic in Vietnam was truly perilous. And he served with great distinction. Arthur Flavell's narration was perfect.

Joe’s account of his experience is genuine. For medics that have served in the last two decades it’s awesome to hear a raw telling of our idol’s experiences. Great read for anyone interested in the history of the Vietnam war, SOF medicine, or MACV SOG. Thanks for your service, and for writing this Joe.

What a great collection of stories by a SOG medic. Some of their missions truly are unbelievable, something right out of Hollywood, except it actually happened. The narrator was great and I would compare this book along the lines of “Across the Fence” another collection of SOG stories.

Our young and brightest

This is a story of America’s young men who fought a savage war, a secret war, in Laos and Cambodia. These battles had to be fought there because that’s where the enemy’s supply and communications were staged and attacks planned in Vietnam. This man was barely out of his teens but faced behind the lines bloody combat against a determined enemy. Got to read this mans story.

The author tells a very compelling story and the narrator has a resonant and pleasant syntax and pace of reading. No theatrics or flowery BS just a good recount of an exciting career in SOG.

A great book that I found to be developmental and maturative for a young man coming of age such as myself. I found great relation with the author and I further highly recommend this book.

If you're picking this title, it's probably safe to assume this is not your first book on MACVSOG.

I have a great interest in the Vietnam war, and especially in the secret war in Laos, Cambodia, and North Vietnam fought by these outstanding Special Forces warriors and the aviators supporting them.

Joe Parnar, like Lynne Black and John Stryker Meyer, has a masterful recall, unsurprising for a reconnaissance man. This is the first title I've read from a medic in this unit, and it is incredibly humbling to hear the harsh realities that are a daily occurrence for special forces medics in combat.

Thank you for sharing your story and allowing future generations to know what happened, as you experienced it.

Candid accounts of true heroism by a humble man, such an unusual combination. a great listen.