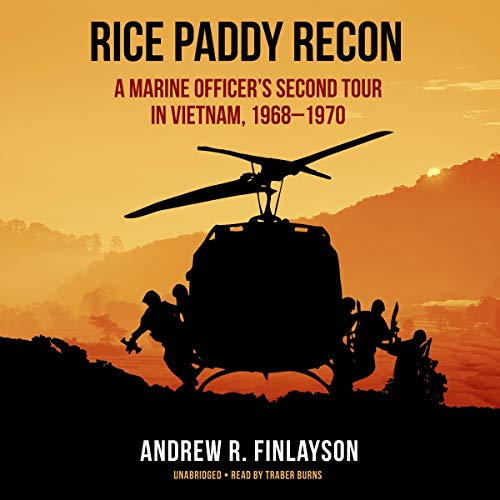 By: Andrew R. Finlayson
Narrated by: Traber Burns
Try for £0.00

A young US Marine officer recounts his experiences of the Vietnam War over a 19-month period. He graphically describes what it was like to perform three distinct combat missions: long-range ground reconnaissance in the Annamite Mountains of I Corps, infantry operations in the rice paddies and mountains of Quang Nam Province, and special police operations for the CIA in Tay Ninh province.

Using official Marine Corps unit histories, CIA documents, and his weekly letters home, the author relies almost exclusively on primary sources in providing an accurate and honest account of combat at the small-unit level. Of particular interest is his description of his assignment to the CIA as a Provincial Reconnaissance Unit (PRU) advisor in Tay Ninh Province, where he participated in several secret missions as part of the controversial Phoenix Program. The name and contribution of the CIA's most valuable spy during the war, the famous "Tay Ninh Source", is revealed.

Longest book I have listened too.

Could of been an excellent book. Narration let it down. The voice just drones on and on. I will have to buy this and read it and I am sure I will enjoy it.

I missed a lot of this book as it put me to sleep nearly every time. I found it tedious and full of administrative detail.
The reading is monotonous and without much emotion, sounding rather robotic.
I cannot recommend this book.

Wish I could give more stars but.,.

For someone interested in the war in Viet Nam this book is full of information that I’d not heard. It is an in-depth after action report of an entire career in the war.
Unfortunately, it is also narrated to sound like an after action report. Dry, monotone and to the point. Could have been much improved with even a little hit of added drama through the narrator.

This book opened my eyes to why we failed to win the Vietnam War. Ten years of blood and treasure wasted by the Political Machine!
After the French Disaster 1954 many answers where available as to how we could approach any military answers.
The true answer for the future was shutting down the Ho Chin Min Traffic in Loas!

The author obviously kept very detailed records of his experiences as he is able to recall scores of personal conversations 40 years after they took place. He had an unusual perspective on the Vietnam conflict (compared to the hundreds of accounts I have read) and obviously saw a lot of action early on but he concentrated more on the political point of view in this lengthy, almost academic chronicle. While the book is interesting and informative, the author seems a bit stiff and repetitive at times, and the voice actor's delivery was a good pairing for the author's writing style which is characterized by erudite narration. Overall, an entertaining story.

Fantastic book! Great story and the 2nd half of this book fills in a lot of gaps for me. Very well performed & written.

I have read many first had accounts of Recon, pilots, and grunt forces. this was the first middle management account I have read and it was very interesting. very well thought out analysis of why u.s. lost war in last chapter. this book is not for beginners but if you have studied war a bit, this is a book you should read/hear.

It never ceases to amaze me how many great books have come from the Vietnam war. Everytime I question whether I should listen to another, I am glad that I did.