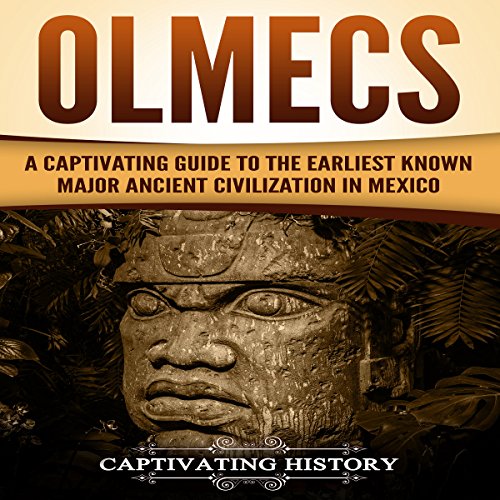 Did you know the Olmecs might have been the first people to introduce writing?

The first people who managed to elevate themselves to civilized life were the Olmecs. But why do they remain relatively unknown, hidden in the long and dark corridors of forgotten history?

The truth is that few historians are ready to tackle the task of uncovering the true story of the Olmecs. Thus, it can be hard for people to find an easy-to-listen-to and cohesive resource on this fascinating civilization.

But that is about to change. In this new captivating history audiobook, you will discover the truth about the earliest known civilization in America.

So if you want to learn more about the Olmecs, click "Buy Now"!

What listeners say about Olmecs

Very glad someone is willing to tell truth!

Captivating History team who represents the other extreme books of explanation of history. Clearly the Olmecs represented a multicultural society and clearly the Olmecs sites in Tabasco where partly destroyed of so called US-archaeologists in the 40’s and 50’s. For more details google it ;) .

Lost cities are cool to visit.

I give Captivating History team a big thumbs up for they are essentially a team who goes into the field. They have been around the world and I’m sure have come to conclusions that many less versed and traveled men have not. There books are always fun reads and their lost cities are always cool.

Its real, its interesting and it motivating.

I am regularly shocked at how much information captivating history team can pack into one book! Time and time again, it's another fine book to contemplate ancient mysteries that are annotated over in other publications.

Thanks to the Captivating History Team.

A book of its class, the book that I really enjoyed listening to. I used this in combination with my College class. There is a ton of information in this book that I found very intriguing.

Interesting book about a very old civilization known as major ancient civilization in Mexico. I have read other books on the Olmecs. I am not a historian but love it, archaeologist but have traveled the area and saw some of those imposing heads.

Check it out, another blast from CH team.

Let me initially say this is not my first book by Captivating History and I am happy once again with book as well. What an education about the Olmec’s. Different proof of their history with different ideas of Olmec trading with different parts of the world. Concepts of where they came from.

It is the theory, presented in a great way.

The Captivating History team, definitely supports the diffusionist theory vs the isolationist, and so do I. He makes comparisons of the writing script of the Major Ancient Civilization in Mexico and brings out many similarities. This book is one of the most well illustrated with many Olmecs images in Guatemala never seen before. I enjoy this audible very much.

A poor attempt at denying obvious truth. When will “so called historians” learn? The Olmecs were Africans. Sorry to disappoint.

the author spewed opinion as though it was fact specifically on the west African influence. he omitted details that sughest ties to the olmec civilization. Dr. Ivan van sertima wrote a book called they came before Columbus that touched on historical evidence he either missed or omitted

Explains how the Olmecs are the mother civilization of Mesoamerica. A look at their culture, art, society, economy, etc. The Mayas and the Aztecs grew out the Olmecs. Locates them in time and space.

This was a very informative audiobook. It was also not one-sided and gave two perspectives on the Olmec. I certainly learned a lot of new facts, ideas, and theories.

This doesn’t really tell you a bit about the similarities between Sumerian and the Olmecs.
Wish it did. But listening I could hear the similarities. Religion , art and trade.

I just called her on the music instruments and culture of my ancestral Mexico I have had to read many books and I find that most readers don’t realize that there are several problems in writing these kind of books. There are books that have facts, and there are books that have facts And opinions mixed in. The problem with Opinion is that they are usually when it comes with a case of native America which is the one that I know I don’t know other books out there or educational with methods the problem with opinions is that they can be positive but it’s still opinion. The ones that bother me are the ones that are Eurocentric another words compared to Europe or just plain ethnocentric there were a few comments in the book that were like that I didn’t appreciate those just give me the facts!
There’s a thing of never appreciate is to pronounce I need a word in the minds of most Americans and some Mexican scholars to Nagle oh it’s native Sol it’s just pronounce it “our way” and they wind of butchering it so bad that you might as well learn to say it the right way and promote the correct pronunciation rinses it was terrible maniacally feeble of that guy to say the word, Nahuatl like this: Nah-hah-til I mean any bonehead will know the basic vowels in Spanish which is the same Italian and Portuguese that you is pronounced like oooooh I mean if you’re going to say the way he said it was three syllable why not learn the correct way and three syllables I mean pronouncing the TL is a little difficult I know but you would be, and they told me they’ll direct or just yesterday, he would be much safer at saying it like this Nah-waht
, Jesus Christ that’s only two syllables it bothers me when people go on record going into a studio and pronouncing the words all messed up and then someone saying OK that’s perfect thank you I would’ve read it much more better. There is nothing wrong with anybody hearing from our awards pronounce correctly. For instance I’ll be speaking in English to you and if I come across a word from Iran I’m not going to pronounce English style I’m going to pronounce it the way they do. That’s the honor a gift to all cultures especially when we’re talking about scholarly material. If I speak in English to you and there’s an Italian word like lasagna, that’s how you say it I did not say la Sagna. Take very little effort to change the Eurocentric/ethnocentric way of approaching saying native words of the Americas. I know someone will come back at me and say but that’s how we do it exactly that is how it’s done but just like you pronounce those Italian words and some French words and even German words correctly say these ones correctly
I could cite more examples but you’re all smart enough to know what I’m talking about.
That was quite a number of other words the guy said that I know could be said in their native pronunciation but you can do it too. I did have an adult one time said to me but I speak English and I told him “brother you and I have the same muscles and vocal cords I am no different than you”.
Wish they would’ve talked about chocolate a little more because there are some more very powerful thing there was quite a few other things that were in accurate in the book and strange supposition like that weird conversation about who invented the tortilla or the fact that chocolate was only consumed by Nobles. There is no documentation anywhere that says that if you go to Tabasco right now like I went there a couple years ago cacao trees grow in every neighborhood we all mix weren’t the first ones to eat it they were the earliest findings and findings means “that’s all we found at this point”, If you go buy one of these trees you’ll want to eat it your first impulse will be to eat it it’s not like there are chocolate bars in the air so these things have been eaten I’m sure since the first humans or in the Americas. People always talk about the art and they always, and I get especially bothered by this because I’m a musician, they always leave out music music and sound direct guides and influence of people in a Nueroscientific manner this is all been proven! So the omitting of musical instruments is just absolutely insane.
Other than that I learned just a couple of things but really not much that I’ve already seen. For the average layman this is a great book I would say hire me and I’ll read the whole thing for free and pronounce the words 1 billion times better
Sincerely Martin Espino

Good information but one of the most outstanding characteristics of the Olmecs was their human sacrifice practices.

Lots of great information in a two hours audio.

If you are interested n knowing about the many indigenous peoples of Mexico and follow their development chronologically, this is this audible to have. It does not deal with the Major Ancient except as influences.

A Five Stars Book, A Classic.

I suspect that the common people of those times deserved a better religion and government than the one they had, steeped as it was in the blood of captives. This book is well worth the read, unbiased, scholarly, and balanced.