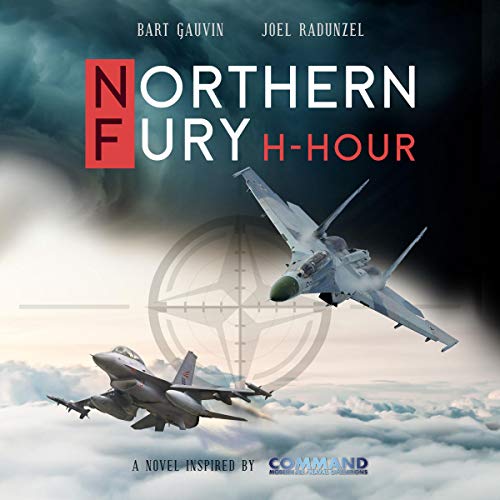 By: Bart Gauvin,Joel Radunzel
Narrated by: Arthur Morton
Try for £0.00

August 1991. Soviet hardliner Pavel Medvedev knows that only bloodshed can save the USSR from complete collapse. With violence breaking out in the streets of Moscow, few realize that he is piloting the Soviet Union on a collision course with its deadliest enemy yet: NATO.

US Marine Colonel Robert Buckner, passed over for a coveted command, takes a post working for Vice Admiral Falkner on his way to retirement. As the world is lurching towards World War Ill, he finds his way towards a panoramic view of the unfolding crisis with a pivotal role to play. War breaks out across the globe, but the pin falls in the far north, where soldiers and civilians alike must battle not just the enemy, but the unforgiving elements. With arsenals of high-tech weapons loosed in both directions, the ultimate reward may not be victory, but survival.

H-Hour is the first book of the Northern Fury series, which tells the alternate history of World War Ill's northern front through the eyes of those who lived it.

This is a very very good book. Red Storm Rising by the late Tom Clancy is my favourite book and all books for me in this genre are for me measured against this. Most fall well short, this does not. As this is not the complete story, I can only hope the wait for the next book is not too long. There is a great level of detail here, I wish I had found the book earlier. It's a long one but captivating in its scope. I keenly await what comes next. Brilliant so far

Just excellent , on a par with Clancy's Red Storm Rising.
Action packed which keeps you hooked.
Disappointed that the second book isn't available yet.
The Narration on the audio book was really annoying at times, poor accents grates on me.

Narrating an audio book is not an opportunity to demonstrate your (limited) voice acting skills. An unbearable listen due to the ham Russian accents. Can’t get past chapter one. I’ll buy the book.

An excellent story with good credibility in detail, if not overly realistic.
The start was slow but was required to set foundation. The voice over accents were sometimes difficult to listen to. Disappointed to find no book 2 on file because I would have continued the series.

The sheer number of inaccuracies and faulty suppositions made about all aspects of the setting of this story detract from what could be a great novel! I suspect that the author's were trying to give the Soviet side as many passes as possible to avoid a one sided devastation. It makes for some incredulity inspiring moments. There seems to be some very large segments of filler that really slow the pace of this book and make it a turgid experience. Nowhere even close to being even in the same league as the books it tries to emulate. I think that the idea was to take what would have been one book into a novella of several parts.

The narration was plodding and the mispronouncing of certain words ('quay' is pronounced 'key' by the way, quite important for a book that is based on air-naval combat) really makes it grating. The attempts at accents and different voices in the majority of cases does not come off.

Overall I would hope that if and when a follow up book is published it would really be more balanced than this, as it is I cannot recommend this book as a stand-alone, and definitely cannot recommend this audiobook since the narration does no justice to those parts that are actually good.

Nato planners must have had a day off

Not a bad book BUT the problem with a lot of these types of books (James Rosone being another) is that even with the element of surprise, Nato always seem ill prepared with the same mistakes being made over and over. Several time I have had to stop listening or reading (both Audible and Kindle) as pretty much every Soviet attack works and every Nato attack fails due to poor understanding of battle tactics.
It feels like they always over estimate Soviet abilities and under estimate NATOs response and ability to have wargamed the potential scenarios before any conflift

Story itself seems good, only managed the first 8 chapters though. Awful narration. Listen to a sample before purchasing, I know I wish I had.

The authors do a good job of setting up an interesting scenario. The set up is a little slow, but it always is moving forward and building, once the plan is set in motion the pace becomes crazy fast, but not in a good way, then it just ends. The Russians plan and execution stretches what it means to be believe able. Nato reactions are too fast, but then inept. The Russians prepared to meet every challenge with a detailed tatical plan. If the action in the book had been paced over 2-3 weeks it would be believable, but the course of a day come on.

I was hoping for as other reviews said a Clancy type story... this is barely a one star story and the narrator is so bad. Waste of my money!

I typically do not write reviews, but felt the need to concerning this book. This book's biggest challenge is the narration. His attempt to use a variety of accents falls well short, I found it a distraction to the story itself - some portions were downright painful to listen to. If these authors continue with the series, I highly recommend a change.

I also found the story started out very very slow - the action doesn't really start until about the mid-to-three quarters mark. The variety of story lines are intriguing and relatively easy to follow, but it appears the writing style, especially character development, has a rather amateur quality to it.

Hats off to these two authors for trying to tackle such a large and complex Odyssey and I will more then likely buy/listen to the next book just for the sake of seeing things play out, but anyone looking for the next Red Storm Rising or Team Yankee will more than likely be left wanting.

My big objection is how it ended. Abruptly and with no conclusion. So many stories left out there.

After 21 hours listening you would think they could wrap a few plot lines up.

Nope, just have to wait.

The story line for the book was good but the narrator has the worst accents for the other characters that I’ve ever heard. I’ve been around the world during my 21 year army career and heard many accents and his weren’t even close to accurate.

Excellent execution of a story that captures the way things could have gone wrong in the cold war. Rich, developed characters, intricate plot and well delivered by the voice actor. You might set aside your Netflix for this one if you like the genre. Think Red October.

It felt like a prolonged prologue. It is hard to evaluate wighout hearing the next books, which I am looking forward too.

I hope there’s a sequel. I need to know how WW3 ends. I love fictional military books.