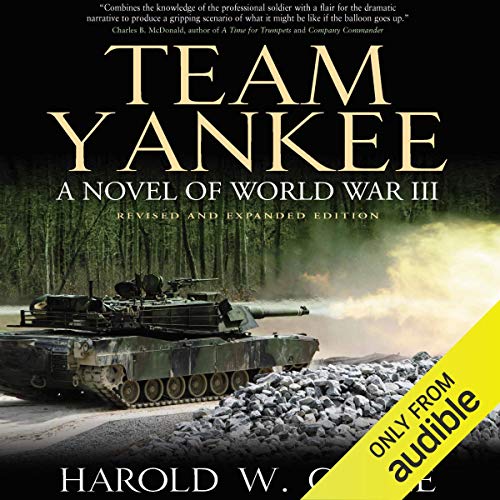 By: Harold Coyle
Narrated by: James Patrick Cronin
Try for £0.00

During the second half of the 20th century, East and West stood on the brink of war. Nowhere was this more evident than in Central Germany, where 10,000 tanks belonging to NATO stood ready to resist a ground attack spearheaded by 40,000 Warsaw Pact tanks. It was a war that never was. But what if it had? How would the opening days of World War III played out?

Team Yankee, the New York Times best-seller by Harold Coyle, presents a glimpse of what it would have been like for the soldiers who would have had to meet the relentless onslaught of Soviet and Warsaw Pact divisions. Using the geo-political and military scenarios described by General Sir John Hackett, former NORTHAG commander and author of World War Three; August 1985, Team Yankee follows the war as seen from the turret of Captain Sean Bannon's tank.

Through Bannon's eyes, and those of the men belonging to his tank heavy combat team, the listener lives through the first 14 days of World War III. The action is vivid and exciting, the tension palpable. Defeat and death are as close as victory.

What listeners say about Team Yankee

Finally ! a novel that captures (modern) armoured warfare as it would have been, from the tiny details that make every Tankers day a chore, to the adrenaline filled race to engagement, so well described and captured here that it made me nostalgic for the confines of my tank, the smell of main gun, co-ax and sweat, are such a large part of my memories that this book made me want it all over again, the exhilaration of riding atop a 60-70 tonne behemoth charging forward, gun sweeping left and right looking for targets is bought to the fore with the scenarios realistically played out within. An excellent portrayal and one of the best WW3 novels I've read.

I used to read this book in the army years ago waiting for the reds to come over the wall. Living near Birmingham it really brings it to life. I've read it dozens of times. So glad it's in audible, well done Mr Coyle!!! Thanks for the memories

love this author, excellent writing and great characters and plot in this page turner.
I enjoy the read and can almost smell the cordite

Not as good as I remember it

I read this about 30 years ago and enjoyed it thoroughly. Now I'm not sure if it's me getting older and more critical but the audio version just lacked something. Added to which I can't have noticed the gung-ho America the great overtones first time round but they really grated after a while. Perhaps it was the narrators voice but it just failed to grip.

If you’re looking for something in the vain if Red Storm Rising you are in for a disappointment. Plodding story line, dull characterisation and just not a “page turner”.

i enjoyed the technical depth on being a tank commander. also the build up of emotion and fatigue was very realistic. slightly puzzled to note the absence of any british input. or is this post brexit? the story line is a bit predictable, you can guess the ending but still a fun read if you want the nuts and bolts of living in an armoured box on tracks!

Good story but nothing special. The narrator is excellent the story itself is .... just ok

This is so two dimensional and superficial it is hard to believe this is based on any meaningful government report - I hope.

Really enjoyed this intense and realistic story of what the beginnings of hostilities during a Cold War may look like, taken mostly from the perspective of a platoon tank commander.

We'll thought out and accurate for the most part, with rich, interesting characters and plenty of action.

My only criticism is that it felt a bit rushed towards the end and that, as being British, I felt a little detached with the lack of any involvement , but that's a personal thing.

They came in the same way, and, we whooped them.

Very interesting and action filled novel. Covers the tactical situation of a hypothetical conventional fight between US and Russian forces in the 80s. As an individual who holds the 19k tank crewman MOS and 11b infantry MOS I can attest to the accuracy of information presented. Very stirring as a soldier who has only participated in counter insurgency operation and not full spectrum peer to peer conflict

Loved this story when I read it years ago. However this performance was so mismanaged I found it unenjoyable. The actor was very uninvolved and lackluster, but he was only one symptom of this patient's death. Whoever typed up his script made many errors and changed a few sentences entirely. (I checked in my hard copy as it struck me so oddly.). Also I wonder if anyone took the time to listen to this after recording, many mispronounced terms and a couple name switches.

A great war of World War III in which US and NATO face Russia and Warsaw Pact in Europe. A bit dated as it was written some 30 years ago and the cold war has ended. However recent events happening in Europe today may still make the story relevant in todays world.
The story POV from tankers seems realistic and believable, as well as the tactics described.
I have read the book many times and listened to the abridged audio version narrated by Charles Durning repeatedly. Cronin's narration was fine in all respects, I just miss Durning's voice and characterization. That was the sole reason I gave a 4 star for performance.
The unabridged audio version has been a long time coming. Thanks to all who made it possible.
Sherman

I have loved this book for 30 years

I adore this book, have since i was a kid. The only issue I'm having with audiobook format, is a lack of those essential battle maps that tie the book together.

A nuts and bolts fictional war novel that is a great listen. (I finished it in 3 days) I feel it avoids falling into the pitfall of a corny war story very and manages to provide some good human characters and great tension. The book does go into tactics and military lingo so if that does sound like your thing..., otherwise enjoy.

An interesting book in its time.

Team Yankee takes place before the fall of the Soviet Union. It was originally published in August 1986. It should be approached as an alternate history book rather than a future scenario type book to enjoy it thoroughly. It is a good war story yarn.

There is nothing better than to read or listen to a book written by one in the know. This book was hard to turn off and split between two days. The tactics and terminology was right on and believable. Great job, sir

Great book, loved it from page one....

What did you love best about Team Yankee?

The story line - it was just captivating, it puts you in the middle of the action and pulls no punches

The tank commander - the Hero - he was what a hero is supposed to be - loyal, brave, smart, thinks out of the box, and is always successfully.

Which character – as performed by James Patrick Cronin – was your favorite?

The tank commander - the Hero

It evoked several emotions including laughter, sadness and empathy.

I can't wait to read more books form this author

Would you listen to Team Yankee again? Why?

Yes, I may have missed some stuff

Have you listened to any of James Patrick Cronin’s other performances before? How does this one compare?

Yes he is awesome in all the books I have listened too.

Only problem I had with the book is the facts on the equipment the were inaccurate. Such as that the Russians didn't have Night Vision, yet they had the T72 tank. The T72 tank first went into service in late 1973. Yet the Russians had night vision earlier than 1960. In fact night vision devices where first available to the military around 1939. I know it is just a story and entertainment, but stuff like that bugs me. I think if you are going to write about it, then you should either know about it, or research it. Besides that, a fun a book to read.