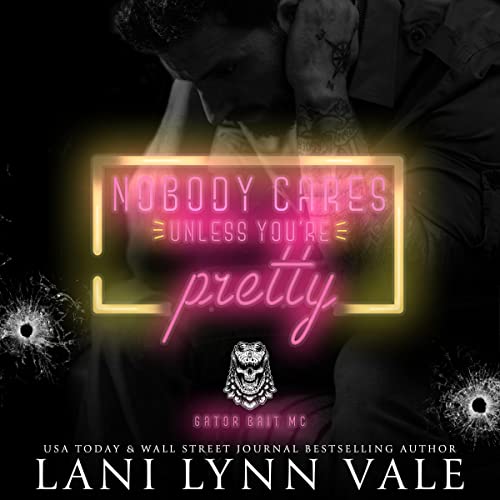 Nobody Cares Unless You're Pretty

The problem with Wake was that he was understandable. He was the type of villain who literally scared the absolute shit out of you because you knew that under the right circumstances, you could end up exactly like him.

Which, sadly, was the case for me.

I’d done the exact same thing as Wake, and now I was a murderer just like him.

Did I know that I did wrong? Hell yes.

Did I regret that? Hell no.

Did I plan on changing a thing? Also, no.

Was I falling in love with a man who should scare the shit out of me? A resounding hell yes.

What listeners say about Nobody Cares Unless You're Pretty

I really enjoy the stories, they make me giggle and sigh! just a really enjoyable listen. I love Lani's writing style.

Overall I think this was a good start to the new series.. but something was missing for me. Maybe I needed more development of Wake and Dutch’s relationship, I am not sure! I did LoL several times and I am Definitely looking forward to more the next book in the Gator Bait MC’s!

Seriously the story plus the romance we’re all so good I’ll be repeating this one multiple times!!! LLV delivers again!!!

Lani Lynn is back at it!

Lani Lynn is back at it! I have been so excited for this new series. This book was amazing! I can not wait for the next! Thank you LLV!

I've been a LLV fan for a long time but lately her books haven't been hitting me like they used to. I am absolutely loving this!! I think she's back!!

I love the story, but sadly child pedifiler’s are out there. Wish more could caught with groups like these & victims get help.tied nicely together with a love story.

Great start to a new series! I love that it was a little longer than the last few and had a much stronger storyline. The only critique I have is with the narration, specifically the male. They both did a great job, but they make the characters sound a lot older.

What is this really written by LLV?

I love most of her books but this one was way out there. It was nothing like her previous books and just didn’t keep me interested. It’s
hard to believe it’s the same author of the other series I’ve read and listen to.

I have recently not been super impressed with the books that LLV has put out, but I can honestly say that this one was really good. I enjoyed the conflict and their insta love. The narrators are both new to me, and I loved both of them!!! I’m once again excited for a series.

Good start to a new series

I enjoyed the characters and the story in this book. The drama was mostly external, which made it interesting.

I like how LLV brings takes some of the issues that are occurring in our society and weaves them into her stories.

The narrators were both new to me. Both were good.